Is This The Arkansas Razorbacks' New Secondary Logo?

The Razorbacks have been teasing "something big" to be unveiled April 21st, and that has been hotly rumored to at least include a new secondary logo. Is this what we have to look forward to?

Share All sharing options for: Is This The Arkansas Razorbacks' New Secondary Logo?

What appears to be the new secondary logo for the Razorbacks has already been embroidered on a hat available for sale on ArkansasRazorbacks.com (UPDATE: They've taken down the URL, but that’s a screen shot below.) 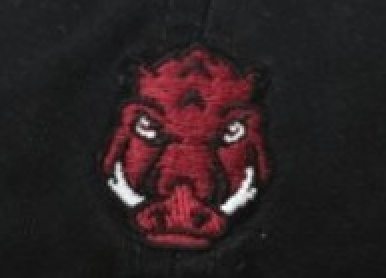 It is a new alternative forward facing Razorback. One of the main reasons for this new logo (besides to sell more merchandise like that hat) is that it is taller and less wide than the primary logo. Where the primary logo is more horizontal, the new secondary logo is more vertical. Meaning it fits smoother into the scoreboards and "Fox Boxes" of television broadcasts. It gives the athletic department more versatility when wanting to put a logo on something.

This is one of the several "something big" things that the athletic department has teased. It was originally tweeted out by an athletic department official that the school was changing its official color from PMS 200 to PMS 202. The University ultimately decided on making the official shade of Razorback red PMS 201. (Note from Doc: They have also hinted, if not outright stated, they will debut next season's football uniforms as well.

Also, it's important to remember this is an embroidered look. If the latest teaser video is to be believed, the logo will probably have the same design style as the current main logo. So imagine the embroidered logo with the same smooth style of the Hog we see on graphics. It's teased at the 37-second mark of the YouTube video)

So what do you think?