Week 3 opponent Texas Tech played their spring game on April 12. Let’s take a look at some of what Arkansas will have to prepare for.

Texas Tech has made a living running the fast paced, no huddle, Air Raid system over the last decade throwing the ball all over the field. (purposefully ignoring the Tuberville experiment) Second year coach Kliff Kingsbury has the same uptempo, stretch the field both vertically and horizontally kind of philosophy, and he wears some pretty sweet sunglasses too.

Bret Bielema also wears sunglasses on the field during the day, but bless his heart, it just doesn’t have the same effect as Kliff’s Ray-Bans. 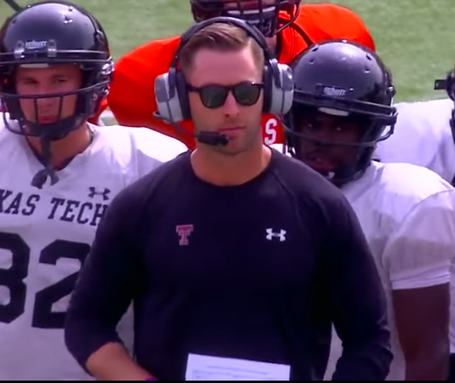 The man can also coordinate an awesome dance off. Hopefully he spends more time getting "Too Turnt Up" during the week they play Arkansas and forgets to copy and paste some plays from his old playbook when Mike Leach was at Tech.

But they really do practice football as well, and they’re not too bad at it.  Here are some take aways from the Texas Tech Spring Game.

Watch the entire Spring Game here if you want to torture yourself.

QB Situation: Davis Webb, Sophomore, 6'4 195 lbs. Kingsbury announced he won the battle for the starting spot. Has a strong arm, can run when needed, does not have blazing speed but can break one. Runs in the 4.7-4.6 range which is plenty fast to pick up a 1st down. Threw for 2,700 yards and 20 TDs last season as a true freshmen. Looked impressive in the spring game with several deep throws and accuracy on the short stuff. Added weight in the offseason.

"That's how he's been in practice," coach Klif Kingsbury said. "He's night and day from where he was last year at this time and being a vocal leader so I've been really impressed with him."

Running Backs: Kenny Williams - the returning senior running back has been moved to linebacker this spring to fill some holes there. The plan is to use him on both sides of the ball. They also have a couple of other decent RBs, one that weighs over 250lbs in Rodney Hall, who was the primary guy during the spring game. Lots of power but running the ball is not what they do.

Wide Recievers/TEs: Throw a lot of passes, use a lot of wide receivers. Tech’s main targets in the spring game were Bradley Marquez and Jakeem Grant. Sophmore Reginald Davis is extremely quick in short screens and will get a ton of plays next season. They lost Jace Amaro who will be a top draft pick this spring, they did not use a whole lot of true tight end sets with him, and do not list another tight end on their roster.

Offensive Line: Viva The Matadors has a good breakdown of this group and what they have coming back. Looks like they will be solid at the two Guard positions and one tackle. The weakness will be at center and Left Tackle.

Defensive Line: Again Viva The Matadors has more info on the Dline. They lost four d-lineman to graduation but signed four Juco players. They are going to be smaller up front than most teams Arkansas will play. They'll try to use quickness to make up for it and make plays in the backfield.

Linebacker: Michah Awe is tough to block and Sam Eguaveon has experience at the middle linebacker spot. With RB Kenny Williams added in to the rotation on the outside, this group will be fast. Against Arkansas they will have to deal with being undersized like the defensive line.

Secondary: Justis Nelson had a good spring game but that is pretty much all they have to show. They will be depending on juco players to fill the losses in the secondary from 2013.

A few plays that are staples of the Texas Tech Offense and Defense.

Quick Screen- The wide recievers are very good blockers and the QBs get the ball out fast. Basically a long handoff where they are looking to get 3-4 yds and occasionally break a long one.

Four Verticals- A staple of the Hal Mumme/Mike Leach Air Raid. They like to use it against Cover 3 or against man with option routes by the inside recievers.

Shallow Cross- This will look familiar to Razorback fans from the Petrino days. Basically look to run verticals and a dig route (deep in across the face of the safety) with a WR crossing 3-4 yds deep.

On this play 2nd and 10 play, the Red Raiders run the shallow cross out of an empty 5 Wide look. 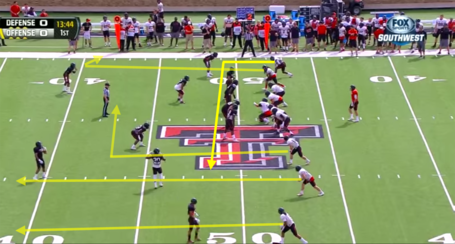 The QB looks for the dig in the middle initially in his progression then one of the vertical routes. He actually holds the ball too long but is able to make the throw to #19 Jalen Edwards who has the speed and quickness to pick up the first down and a 12 yard gain. 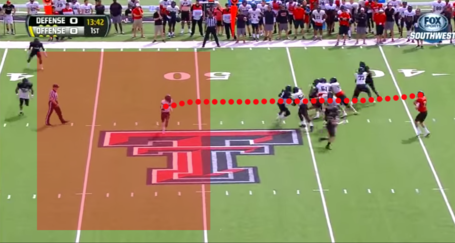 On defense, Tech uses a 3-4 as its base, and likes to blitz a lot. Obviously against Arkansas and two or three tight ends the alignment will change. They will look to blitz and create turnovers with a lot of man and zone blitzes mixed.

Here is an example of a Zone Blitz on a 3rd and long where they show 7 at the line of scrimmage pre snap. 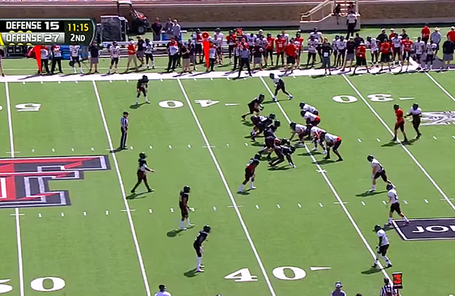 You can see there is no way that the Tech offensive line can block this much pressure. Not sure if the quarterback checks, or the coach just has the perfect play call on, but a quick screen to the wide receiver is called. 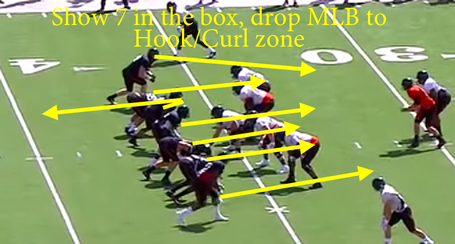 In most cases this play would be exactly what an OC would want, catch the linebackers in a blitz and get the ball out quick with 3-4 blockers in front. 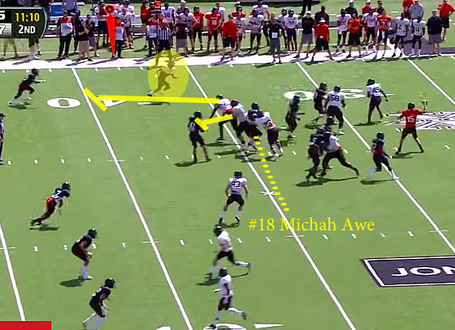 But linebacker Micah Awe reads the play and does not rush upfield. He then fights off the center’s block and makes the tackle for a loss forcing 4th down. 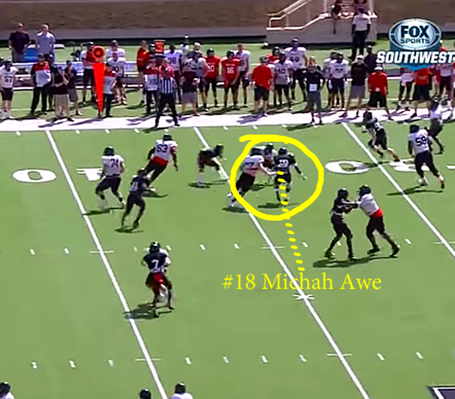 This team will be a tough matchup for the Razorbacks in Lubbock, but after the first two games against Auburn and Nicholls St. we may just have a better sense of how the Arkansas secondary can cover in the new scheme. They will need to show that they can make consistent reads and tackle in space because this team will definitely put them in many of those situations.

Arkansas will be more physical on both the lines. The Red Raiders have an aggressive defensive coordinator, but will rely on some incoming freshmen and Jucos to solidify the defense.

"I think we were depending on a lot of guys coming in from that class (2014), especially the junior college guys, so there are some guys that need to step up," Kingsbury said.

After the Texas Tech spring game they still have a lot of questions on the offensive line, young players at linebacker and a young quarterback. Davis Webb has all the skills to excel in that type of offense. If Robb Smith can get pressure on him he will make mistakes. They have a wealth of play-makers at wide receiver which will be a tough matchup for an Arkansas secondary that struggled last season. Tech will score some points, it’s what they do, but the running game for the Razorbacks should put up good numbers on an undersized defensive line and linebackers.

The trip to Lubbock will be billed as another match up between Real American Football and Up Tempo Air Raid. Is it September 13th yet?