SEC football is back in action and proving to the rest of the country why we are better than them.

Thirteen of the 14 schools have started their season; LSU was rained out on the Bayou. With one weekend down and 11 remaining, here's how the teams rank, in terms of POWER of course.

The SEC dominated on the first weekend of football, as if we expected anything else. The league went 12-1. Over in the B1G, it looks like the Penn State kicker spent his offseason at an SEC BBQ establishment, not the weight room. Here's the first funny of the season...

You get rewarded by playing good teams early. I only wish this was a home-and-home series.

Mark Richt and his team had those duck boys from Louisiana-Monroe so scared they called the game with almost 10 minutes left to play. Too bad we didn't have the weather on our side in 2012.

The Tiger defense helped make up for the lack of an offensive spark from Jeremy Johnson. With that defense came one of our favorite faces in all of college football, Billy Muschamp's scowl. 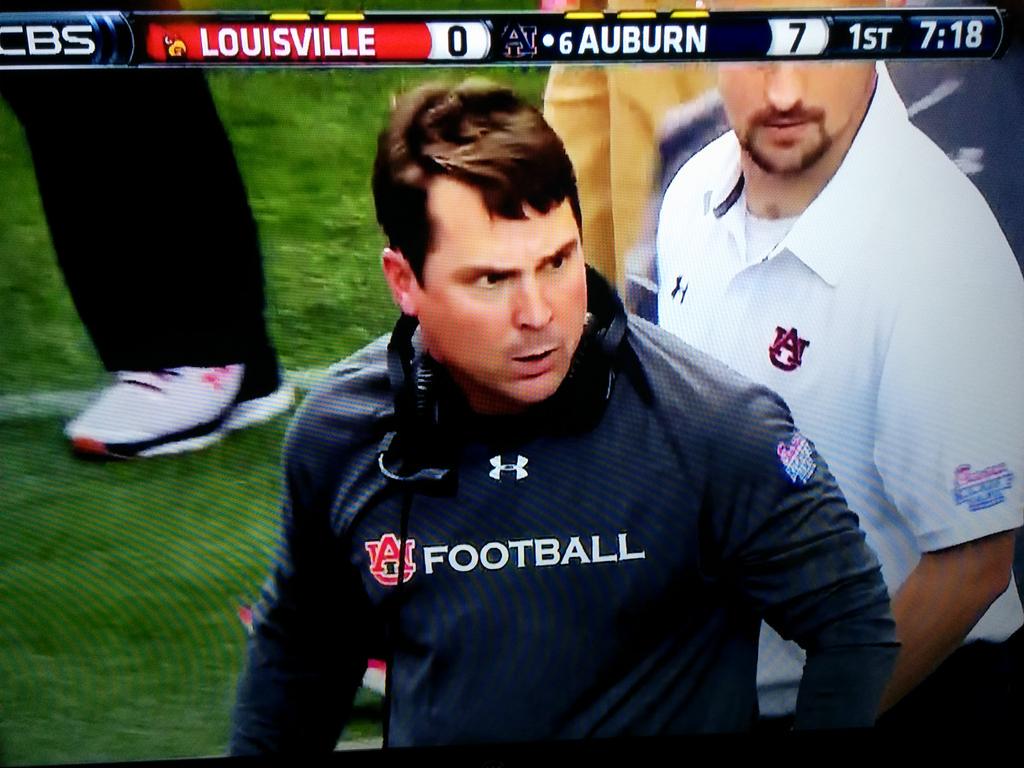 The Aggies provided the most impressive win of the weekend for the SEC. And, in turn, bragging rights over all of your PAC-12 coworkers for the rest of the season.

Rebels coach Hugh Freeze was not a kind host to his guests, Tennessee-Martin . He even had defensive players playing offense, running up the score on the poor Skyhawks.

The Hogs took care of business easily, though in a different manner as was expected. Brandon Allen ruled the air, tossing for 308 yards. Keon Hatcher pulled in two TDs and had over 100 yards receiving. Oh and Alex Collins averaged over 10 yards per carry. A good opening weekend in Fayetteville.

The offense put on a good showing in Nashville against Bowling Green, but the defense had times where it looked a little shakier than any Vol fan wanted. Then there was this genius from Bowling Green who needed a little extra time getting off of the field.

The Tigers' game with McNeese State was rained out. I bet the tailgating scene wasn't.

The look on 84% of State's fanbase when their game against an abysmal Southern Miss squad was closer than it should have been: MSU fan

The Tigers will need more of a running game if they expect to return to Atlanta as SEC East champs. Maty Mauck's arm was plenty against SEMO for Week 1, though.

Head coach Jim McElwain's debut was an offensive show in which the Gators scored more points (61) than all of Will Muschamp's teams. Not really but it seemed that way. During the game, New Mexico's team bus was broken into. Only in Florida.

The Gamecocks came away from the weekend as the ugliest winners of the weekend. The opposing quarterback threw almost the exact same interception in the endzone twice.

The Wildcats tried their darndest to blow their season opener with Louisiana-Layette. It took a touchdown in the last minute to survive.

The Dores' only hope of getting out of the SEC cellar is if Kansas makes its way into the SEC.