You may have heard that Texas Tech's run defense is bad. Just how bad is it?

The Arkansas-Texas Tech matchup will certainly be a contrast of styles. Tech quarterback Davis Webb is fourth in the NCAA in passing yards, while the Hogs rank 12th nationally in rushing. The winner will likely be the team that can slow the other's strengths.

Arkansas' defense is a known entity: the Hogs struggle to stop anyone capable of throwing the forward pass. The Hogs do have some intangibles working in their favor: a) the Red Raiders tend to shoot themselves in the foot, averaging over 100 penalty yards per game, b) the Hogs do have a pretty good pass rush, c) Tech's offense has been largely dysfunctional of late, struggling with timing and Webb's somewhat jittery mechanics, and d) Tech's receivers don't appear to be near as talented as Auburn's, or even as talented as typical Mike Leach/Kliff Kingsbury Air Raid receivers usually are.

So what about Texas Tech's run defense? Well, the numbers aren't good (for Tech, that is).

Sorry, that's the easiest way to put it. But let's see how bad.

Here's how opponents fared running the ball against Tech versus their season averages:

For the third point, let's break down the stats in a different way.

This chart can be read this way: Texas Tech was 3-4 against teams that generated at least 40 percent of their total offense from the run (over the full season). The Red Raiders were also 2-0 against teams that generated less than 35 of their offense from the run, and those two wins (SMU and TCU) were by far the best defensive performances of the season. The three wins came against Texas State (a member of the now-defunct WAC), Kansas (3-9, lost to Rice), and, again, the trend-buster against Arizona State. Arkansas, for what it's worth, generated 58.4% of its offense from the run in 2013, far higher than any of Tech's 2013 opponents.

UCA's 178 rushing yards didn't come easy: the Bears had to attempt 54 rushes and average only 3.3 yards per carry. But the UTEP game was downright ugly: the Miners (2-10 in 2013) rolled up 277 rushing yards in 52 carries, for a tidy 5.3 yards per rush. Workhorse back Aaron Jones totaled 147 yards in 23 carries (6.4 yards per attempt) while backup Jeremiah Laufasa picked up 47 yards on just six carries. Of course, Jones topped 200 rushing yards in the opener against New Mexico, so I needed to study him further.

Jones rushed for 811 yards as UTEP's main back a year ago, gaining a pedestrian 5.2 yards per carry. The Miners got 53.1% of their offense from the run last year (remember, teams that high tend to give Tech trouble) and rushed for 184.7 yards per game in 2013. While they are likely improved in 2014, they are probably not a bowl team.

Even beyond the gaudy rushing numbers lurks trouble. Here are some of the defensive stats that could bite Tech against Arkansas:

1. Tech has yet to force a turnover in 2014 (is Willy Robinson the defensive coordinator?). If Arkansas' offense doesn't turn the football over, it can be really, really good against much better defenses.

2. Tech's opponents are 10 for 10 in red zone scoring. The Red Raiders have allowed five rushing touchdowns in the red zone through just two games.

3. Tech is tied for 75th in the NCAA with just three sacks this season.

4. And the BIG one: Tech is tied for 114th in the NCAA with just six tackles for loss all season (that includes the three sacks!).

That's right: the Red Raiders have been exposed to 103 non-sack rushing attempts (that's 3rd in the NCAA), and they have only managed to stop the runner for a loss on a measy three carries. Oh yeah, and only one of those three TFLs actually came against a running back. UTEP's Jamiell Showers fumbled a snap and a Miner fell on it, and the other was a failed quarterback draw by UCA quarterback Taylor Reed (a former third-stringer at Arkansas).

The numbers aren't pretty for Texas Tech's defense, so let's look at the personnel.

Kingsbury was well-aware of Tech's run defense deficiencies, so in the off-season Tech added junior college defensive tackle Rika Levi. Levi is a massive human being, standing 6-foot-2 and weighing in at around 345 pounds. I checked his scouting and recruiting reports: he's an average three-star recruit by all of the sites I checked (Rivals, ESPN, 247), he picked Tech over offers from Oregon and Washington along with some smaller schools, and his reports find his strengths to be his size and strength, and his weaknesses to be explosiveness, quickness, and stamina.

Of course, none of that will matter if Levi doesn't play. He injured his knee early in the first quarter against UCA and has not played since. As of Tuesday afternoon, he's questionable leaning toward probable, although he certainly won't be 100 percent.

Without him, Tech has some issues up front. They want to give a 3-4 look on defense, but the defensive line is not anywhere near capable. The 2013 starters at nose and DT are gone, and Tech added four junior college linemen (including Levi) and prayed one would pan out. Starting nose guard Jackson Richards, who was converted from defensive end in the spring, weighs just 268 pounds. Tackle Demetrius Alston is 267. Defensive end Branden Jackson, the lone returning starter, is 270 and the best lineman Tech has.

Their other nose guard, senior Jackson Richards, is 268 pounds and played defensive end all the way until this spring. Tackle Demetrius Alston is 267. Defensive end Brandon Jackson is 270. Richards was a four-star recruit coming out of high school, but as a defensive end, not a nose guard. A 267-pound nose guard in a 3-4 front is a recipe for disaster in major college football.

The Tech linebackers are also small, weighing in at 220, 225, 228, and 236. Their best linebacker is the "Bandit" or weakside outside linebacker (usually plays like a 4-3 defensive end), Pete Robertson. The other three linebackers (traditional middle, strong, and weak) are all new starters, and have really struggled so far. The main guy to watch is strong-side linebacker Kenny Williams, who will be tasked with getting around blocks from Brey Cook, a tight end, or a fullback to stop the running game. UTEP was able to block him or run around him with alarming frequency.

The secondary starts three sophomores and a freshman. Two previous starters are back there. The unit hasn't been tested much in 2014 as opponents are generally running the football, although they have performed pretty well, short of not forcing a turnover.

1. If Levi doesn't play, Tech is in serious trouble. Arkansas will be able to block Richards at nose with one man (usually Smothers) easily on inside zones, dives, blasts, and powers, freeing up a second lineman to block elsewhere when he would have to help on Levi. Even if Levi does play, Arkansas' signature "wham" play should work just fine, since the entire play is designed to get around big defensive tackles like Levi that are all over the SEC

2. Tech probably won't be able to stick with its base 3-4 even if Levi plays. This roster has been recruited to play against high-powered Big XII spread attacks, and lacks depth at defensive tackle to play with a four-man front. However, with a starting interior line averaging 267.5 pounds, Tech will need more bulk up front. Expect some of the junior college DTs Kingsbury signed to get a baptism by fire on Saturday.

The newest feature of Arkansas' offense is, of course, the wham play. The wham play just screams Bret Bielema: it's name for the sound that the pulling guard, tight end, or fullback makes when he hits the defender head-on. Here it is, against a 3-4 defense: 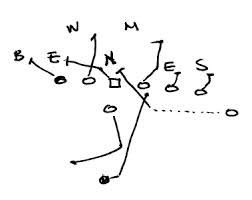 What's happening here is not so much power as leverage. While the talking heads continue to proclaim that Arkansas will never "out-Alabama Alabama," Bielema and Jim Chaney have transcended the debate by making a leverage blocking play as a base of Arkansas' offense. This type of blocking is very similar to what Jim Harbaugh did at Stanford and now with the 49ers.

The nose guard is left unblocked initially. He charges through the line only to get drilled by the H-back who had a running start and knocks to the left and out of the play. As opposed to a heads-up power block, this is called a "wham" or "trap" block: the objective is to knock the nose guard just enough off his trajectory so the running back can squeeze by to the right. Here, the 49ers use a wham play to run downhill against the fearsome Lions defensive line, led by Ndamokung Suh.

Delanie Walker, the 49er H-back, makes the hit on Suh, one of the biggest, meanest linemen in the NFL.

Compare that to this play, where the Hogs put Patrick Arinze as the H-back in a bunch set and allow him to knock the Auburn defensive tackle out of the play.

See Arinze fly in there? The Wham play often looks odd because the leverage blocking techniques allow some defensive linemen to cross the line of scrimmage, but most of them have run themselves out of the play in doing so. The Hogs can also use a pulling guard to make the trap block, but that's less likely against a 3-4 front.

Hopefully that description of the Wham play helps bring together how Arkansas will attack Tech's defensive front even if Levi plays. Plays involving trap blocks are best utilized against a defense that is over-aggressive to stop the run, making it ideal for a team like Arkansas that will face stacked boxes and linemen eager to get into the backfield.