And the reasons are ample.

Share All sharing options for: Reasons to Hate: Texas Tech

It's a non-conference, non-FCS opponent.  It's Texas Tech, and an old Southwest Conference opponent deserves just as much hate as the SEC foes that are on the schedule each season.  Let's starting hating on the raiders

1. Yosemite Sam Raider Red. While Arkansas has 4 or 5 different Razorback mascots, Texas Tech has two mascots.  Zorro The Masked Rider and Raider Red.  The Lone Ranger The Masked Rider started being the mascot in the 1954 Gator bowl when Joe Kirk Fulton led his horse onto the field (I assume for the horse to do his business), and the football team decided to follow them in.  Texas Tech defeated Auburn, so the school adopted The Masked Rider and his horse as the official mascot and asked them to come on to fertilize the field before the Raiders took the field in all home games.  In the 1970s, other school started to complain about a live horse on their field, so Texas Tech purchased the equivalent of a Yosemite Sam costume and now they have Raider Red as a mascot.  Raider Red won the 2012 Capitol One Mascot Challenge, which is why you should hate him.  Not only that, but he is clearly ripped off of the hootinest, tootinest, shootinest bobtail wildcat in the West.

2. Ryan Gosling Kliff Kingsbury is a good looking guy. Pretty, even. He's so pretty, Arkansas fans are even almost losing their wives to this young upstart.  He's 35 years old, head coach of a FBS team in a big 5 conference, gets paid $3.1 million a year, and has been physically compared to one of the hottest actors in Hollywood (repeatedly).  If you can't hate that.... what can you hate?

3. The Old Southwest Conference. Texas Tech gets the glory of saying they were in the Southewest Conference, but they joined the party a little late.  Before 1956, Texas Technological College (I want them to bring back the "nological") was a member of the Border Intercollegiate Athletic Association with Arizona, Arizona State, UTEP, New Mexico, and NMSU.  Granted these schools had interesting names at the time like Arizona State Teachers' and Texas Mines.

Also, Arkansas' all-time record against Tech? 28-7. It was not a rivalry. Sick of people playing up the "renewing an old conference rivalry" line. 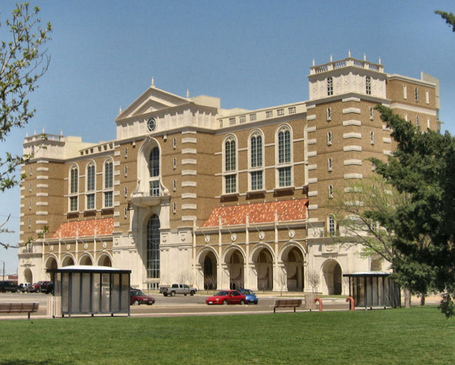 Or Tech has just been trying to lead us into a trap these first two weeks. If so, screw you, Tech.

6. Lubbock. I've been to Lubbock.  It is flat, dusty, smelly, and smelly.  Yes it smells like cows on one side of the town and it smells like unrestricted pollution on the other side.  It's in the middle of nowhere.

7. 2008. The three way tie.  It's hard to think about Texas Tech Football without thinking of the epic catch by Michael Crabtree and the blackout student section wearing their Heath Ledger Joker makeup.  It's such an iconic moment.  It defines Texas Tech football to this day, but they were demolished by Oklahoma a few weeks later. (Note from Doc: I was at the game in Norman and tickets outside the stadium were really freaking expensive and then Tech no-showed. Boooo.)

Texas Tech will be on the schedule again next year, so don't use up all of your hate on Saturday.