How much do you love Cupcake Week? SEC teams took care of business, unlike some other conferences...

All of the SEC teams had a bye week since (except for Vandy, who was throttled again). Twelve of the 14 teams played non-conference foes, and all 12 handled them with ease.

As a part of part of ranking the POWER of SEC teams, I would be remiss to ignore the fact that the Little 10 is essentially eliminated from the first College Football Playoff. The only respectable loss came in Eugene, Oregon as Michigan State lost to Oregon in the best game of college football this season.

Here are the lowlights:

-Its highest ranked member, No. 8 Ohio State, lost in a night home game

-Other favorites Purdue and Northwestern lost to inferior opponents while Iowa struggled with Ball State, all three at home

1) Georgia (1-0) Last week: 1- Off this week, the Bulldogs travel to Columbia for a date with South Carolina next week.

2) Auburn (2-0, SEC 1-0) LW: 2- The War Eagles had to fend off a quick responding score early, but then never looked back. Cameron Artis-Payne had 116 yards and three touchdowns, further proving his legitimacy in the line of Gus's Auburn running backs.

3) Texas A&M (2-0, 1-0) LW: 3- Kevin Sumlin may have the best team in the state of Texas. Baylor maybe would give him a run for his money, but Lord knows the Cowboys defense couldn't stop him.

4) Alabama (2-0) LW: 4- Much to the pleasure of Florida Atlantic fans (Do those exist?), the game was called in the fourth because of weather. Blake Sims should be the starting quarterback. The offensive playcalling tried its darndest to show off Jacob Coker's deep threat capablities to no avail. Here is your weekly, "What the heck, Lane?" look from Saban: 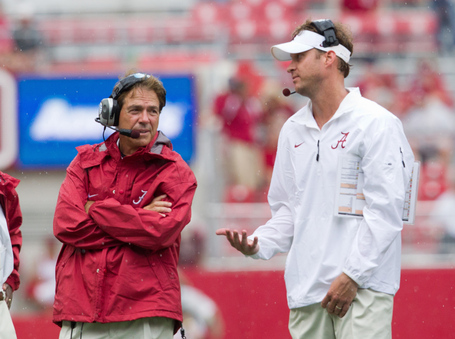 5) LSU (2-0) LW: 5- LW: Freshman Leonard Fournette proves he is a Tiger by showboating a Heisman pose after his first career TD run.

8) Florida (1-0) LW: Unranked- No points allowed in The Swamp this season through two contests, although one of those "contests" never happened. I'm still weary of the Gators in light of their recent years. This team has some talent and could be poised for a run if the offense can keep up with the defense.

9)  Mississippi State (2-0) LW: 8- In a preview of two future opponents, Mississippi State wasn't overly impressive in Week 2. The defense gave up 435 yards through the air.  Bulldog signal-callers threw four touchdowns. So go ahead and get that arm warmed up, Brandon, and defense, learn to cover the pass.

10) Arkansas (1-1, 0-1) LW: 12- That feels oh so good (and the two-spot jump is directly related to it). You can be mad that Nicholls State was even on the schedule or you can take a week off from complaining and embrace this feeling like the USTA punter.

11) Missouri (2-0) LW: 9- Quarterback Maty Mauk threw for five touchdowns in the Tigers second win of the season, but it wasn't until later in the second half until they started to pull away from Toldedo. In both of their games against lesser opponents the  Mizzou has looked less than impressive, giving us a little more hope about that trip to Shreveport.

12) South Carolina (1-1, 0-1) LW: 10- Speaking of teams who have underperformed, the Gamecocks used a 10-minute drive in the fourth to secure a victory over East Carolina.

13) Kentucky (2-0) LW: 11- Another good win over a non-conference opponent. They'll face a real test as they travel to The Swamp this weekend. 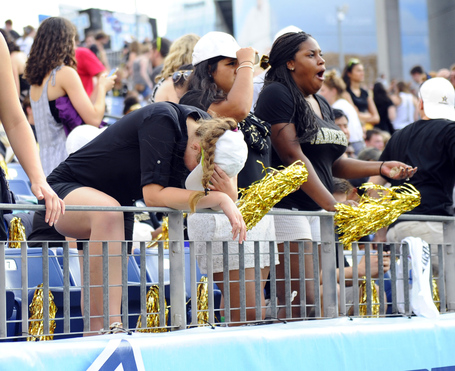 The depressed look, the yawns, all of this...