How Can Arkansas Slow the Auburn Rushing Attack in the Season Opener?

Here is the first of several in depth looks at the Arkansas Razorbacks first opponent of the 2014 season.

Share All sharing options for: How Can Arkansas Slow the Auburn Rushing Attack in the Season Opener?

Winning the SEC West, SEC Championship and being seconds away from winning the BCS National Championship Game were far down the road for Auburn when they played at Arkansas last season. It took several unbelievable plays to get there, but nonetheless the engine behind their success was the same rushing attack used in Fayetteville. One individual concept plus a few variations proved to be enough to win at DWRRS. The Inside Zone play, and the use of Nick Marshall as a run threat on the Inside Zone Read amounted for a majority of their 233 yards rushing.

The Razorbacks actually did a decent job slowing Auburn down overall. Thhose 233 yards were the Tigers' fourth lowest of the season after Florida State at 232 yards (Auburn Loss) , LSU at 213 (Auburn Loss), and Mississippi St with the fewest at 120 yards. (Auburn won 24-20 on a go-ahead TD pass with 10 seconds left)

An in-depth look at some of the new things the Razorbacks are doing from the Spring Game.

This season at Auburn will not be any easier than it was last year if the Razorbacks are not able to slow down the Indy (Inside Zone), Indy Read (Inside Zone Read), and Indy Back (Inside Zone cutback) plays. I was able to get some ALL 22 Film to break down exactly where the 2013 Arkansas defense struggled.

Auburn busted a few big runs on the very first drive that set the tone.
Mason and the other Auburn running backs used this play to gash the Arkansas defense throughout the first half. The defensive tackles for Arkansas both see double teams, and do a good job of holding ground and fighting through the blocks. The problem occurs in the design of the play which brings the linebackers away from their gap responsibilities.

Nick Marshall looks to be reading #42 Chris Smith, but it's all for show. The play is intended to bounce away from the direction of the FB Jay Prosch and off of LT Greg Robinson's block. It's a called give all the way like the majority of Malzahn's zone read plays.

The biggest issue for the linebackers on this play involves reading the flow of the backs and blocks of the offensive lineman. Overpursuit was the biggest problem and led to most of the big gains. Most linebackers are taught if the near back goes away to attack the backside gap, and if their key back comes toward them to attack their frontside gap. Malzahn makes a living off confusing these keys by sending fullbacks and Hbacks in cross blocks to further muddy the waters for a LB. 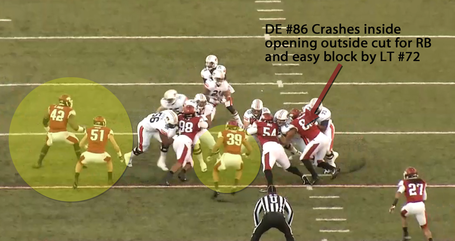 At the mesh point in the pic above, you can see the threat of the QB to pull on the backside causes Ellis #51 to fill the C Gap to his left along with DE #42 Smith. This allows the QB to essentially block 2 defenders himself and keeps them from pursuing from the backside.

We take a close look at what new Arkansas DC Robb Smith will likely be bringing to the field this fall.

Also #39 Lake has moved to the play side A gap directly across from Mason and Marshall. Due to the double teams up front on the defensive tackles, there is no path for Lake to take in order to gain ground on the RB. He has overreacted to his key and is beat, but the defense is designed for Lake to spill the back outside where the SS and cornerback should have an angle.

But there is another problem on this particular play in that the DE #86 crashes inside and leaves an easy bounce to the outside. Normally this tactic of a scrape exchange would work, but the SS is not able to contain Mason due to the crack block (gets in the way) of the WR. In the pic below you can see the WR who is blocking down on the SS Turner. If the WR would have made a better block on this play it would have been a TD instead of a 15 yd gain.

Mason has open grass from the hash marks to the sideline to make a move 1 on 1 with the corner, which was a bad matchup for the defense. 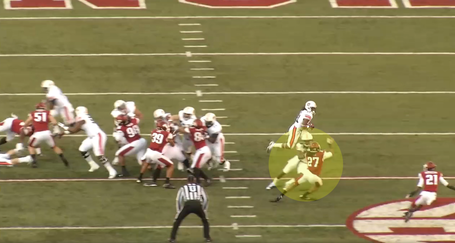 The SS Alan Turner uses a good angle and has the speed to keep the RB from getting up the sideline but the end result is a huge gain.

Malzahn then followed it up with the same play just with different "window" dressing. He had Mason line up in the slot and motioned into the backfield for the mesh with the QB. 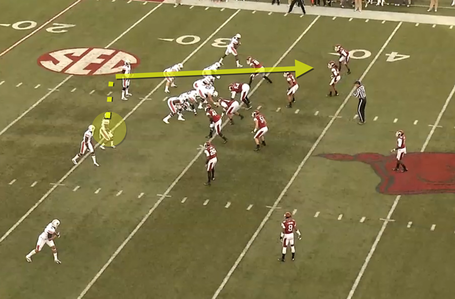 The result is still a 9 yd gain but the LB missed Mason in the hole at the LOS, and the WR doesn't get much of a block again and actually trips Mason in the process. This is a more sound approach to stopping the play with mistakes not occurring in alignment or technique as much as over pursuit.

Mistakes by the Defense on this series:

1. Linebackers being over-aggressive in flowing toward the read side of the play
2. DE crashing inside to chase the QB mesh instead of slow-playing and forcing ball carrier inside.

These two plays set the stage for the rest of the cat and mouse game that went on in adjustments. Arkansas changed personnel and went to a slightly different scheme in the 2nd half which led to fewer yards on the Inside Zone and forced Malzahn to run more of the pull side of the Inside Zone Read. Last season the question was whether to play aggressive and take away Mason on the inside runs, while giving the opportunity for Marshall to jump outside on the pull. Or, do you play a disciplined scheme that puts your LBs in one on one situations with Trey Mason?

We will all be anticipating what Robb Smith's gameplan will include come August 30th. Will he be more aggressive off the edge with on OLB or safety? Will the revamped secondary be able to cover the Auburn WRs with less help from the safety position?

In Part II, we will take a look at just what Arkansas may have in store this fall for the Tigers in both personnel and a different defensive scheme. In your opinion what are the keys to beating Auburn from a defensive point of view?