After doing a spring practice preview of the Razorback defense, I wanted to take a more in-depth look at what Robb Smith likes to do with his defenses.

Many Hog fans know Robb Smith was the defensive coordinator for the Rutgers team that came to Fayetteville in 2012, but what impact did Smith have on the game schematically?

Well, I believe the number one principle of his defense, and of his mentor Greg Schiano, is to stop the run. Arkansas in that game only had 73 yards rushing (on only 19 atts). He didn't blitz as much when he took over compared to Schiano's teams in the past, and he used a few different fronts, including a 4-3 under in addition to his base 4-3 over. Arguably his best game as a defensive coordinator was that game against Arkansas, considering the Hogs’ talent level.

The biggest factor in his scheme was his ability to make adjustments on the fly. An example was when he switched to a three man front in the second quarter after the defense had some early trouble defending the deep verticals and shallow crosses.

From the first drive Arkansas attempted to spread the field to create space and Cobi Hamilton had a monster game on the Rutgers secondary. On several instances Smith put his DBs in man or a pattern matching zone one on one with a WR. When his pressure up front was not able to get there quick enough Arkansas was able to gain yards on big plays.

After he saw that his defense could handle the Arkansas run game he was able to use an extra defender in coverage.

Later in the season, Smith used a 3-man front from the start against Louisville and was able to contain their offense for most of the game. 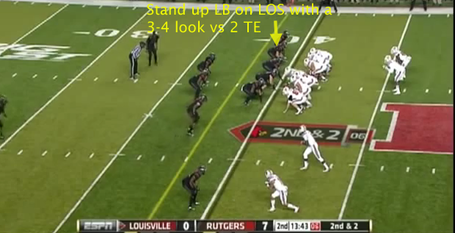 It will be interesting to see if he uses this front against Auburn as they like to use multiple TEs and wings creating a similiar look to this. His defense played well in the 1st and 3rd quarters of the 2012 season (gave up 37 points in 1st, and 27 in 3rd) which can be attributed to being prepared and having a solid gameplan going in, and then making adjustments to the offenses changes in the 2nd half.

The base defense will likely be much the same as in 2013 for Arkansas with a few slight schematic changes going from a 4-3 Under to the 4-3 Over that Smith has used in the past. He has toyed with the under front in previous seasons as he has with a 3-man front so I would expect to see all used at some point in the season. 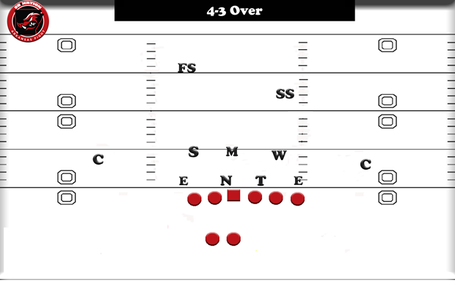 This is similiar to what the Super Bowl Champion Seattle Seahawks have been using with a few adjustments on where the Sam Linebacker lines up. The Monte Kiffin/ Pete Carroll connection at Arkansas is something that many long time fans will recognize, and this scheme has evolved into what the Seahawks currently use.

Robb Smith used this adjustment as well as the base 4-3 Over. It basically eliminates any runs away from the tight end and with the safety in the box on the TE side it is also difficult to run Strong both inside and out. The use of "Overhang" players to combat power runs from the spread is a new trend that may be a way to slow down teams like Auburn, Oregon, etc. Moving the highlighted LB (or a safety) above to a position at the LOS and outside the tackle makes both the outside run game and Spread Option plays difficult for the offense to block.

What will the foundation be for this defense in 2014?

Pressures from various directions to confuse a QB and disrupt protection schemes on passing downs is a cornerstone of Smith’s philosophy. He is not afraid to send a safety blitz, overload one side with 2 linebackers in a fire zone or dog, walk up both middle backers in the A gaps or a corner off the edge. He will use this to both attack on run downs and passing downs.

Putting so much pressure up front leaves a lot of opportunities for a secondary to get burnt - and Arkansas' did all too frequently in 2013 while playing a less aggressive style. The style places a high amount of responsibility on the DBs to be in the correct alignment and coverage. Smith simplifies his coverages and schemes in order for players to play fast and by scheme his DBs are given a tough task to cover in space. This could be one area that we see some problems where a blitz is beat for a long gain in one on one coverage. But that is the game that he plays, one high risk and high reward.

His main blitz packages come from what is known as a "Fire Zone". Some examples from an under front can be seen here.

Here is an example of a Safety Blitz in the game against Louisville. They had Rutgers in the front they needed to break a big gain in the red zone, but the safety was not accounted for in the blocking scheme. 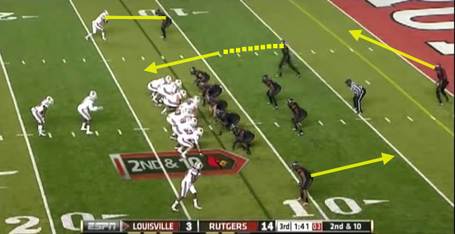 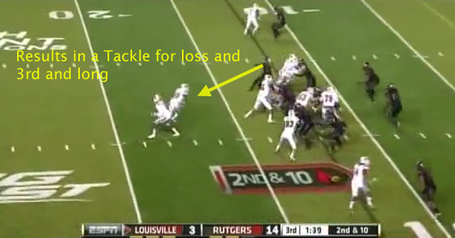 He will also send pressure with man coverage or cover 0 across the board as he did in the game against Arkansas. The 2013 Arkansas defense used a lot of quarters coverage and Smith likes to use a version of this that's a split field coverage. In it, one side of the formation plays a cover 2 and the other side is in a 1/4 look. Smith has a more simplified system in this area than what Ash had, and from his interviews has made communication and simplifying play calls a top priority.

Improvement or more of the same?

The 2014 Razorbacks will be a more aggressive team in pressuring and forcing the offense to throw short. There will be less cushion in coverage and more hot routes thrown in order to avoid sacks. On run downs there will be more pressure from linebackers and safeties in the alleys to make plays in the backfield. Will this result in a better overall defense with the talent and depth? Hard to say, but as with any rebuild progress is a slow process.

The fine line between a 10 yard loss and a 15 yd gain will come down to whether or not the athletes on this team can cover and tackle 1 on 1. From the last few seasons this has not been the best scenario, but with a simplified system there is an opportunity to go the other direction. There is no doubt in my mind that the run defense will improve from what it was last year, and will give up fewer yards. Scheme and X's and O's only make up a part of the game and sound tackling, reading keys and mental toughness play a large factor. What this team looks like at the end of the spring game should give a good indication of the direction and what changes have been made on the defensive side of the ball.

Next Up In College Football