It's not even slightly fair. The Western division presents the most difficult challenge in college football by a long shot.

The SEC West is loaded.

Arguably the weakest link in the division, Arkansas is the only team to suffer a loss on the young season and just blew out a mid-tier Big 12 team by 21 on the road. The Hogs' lone loss came at the hands at another division opponent, Auburn. Five teams are ranked in in the top 10 in the AP poll. As much that has been made about the success of the league, this could be the strongest any one division has ever been. This should make sense given the recruiting success in the past few years. While some of the top teams in the West may not be as strong as they have been during some past seasons, the dominance of SEC West teams is here to stay for at least a few more years.

1) Texas A&M (3-0, 1-0 SEC) Last week: 3- The Aggies moved up to the top spot because they have the most impressive victory yet, especially after seeing a reinvigorated South Carolina team handle Georgia at home. Kenny Hill already has over 1000 yards passing with 11 TDs and no INTs.

2) Alabama (3-0) LW: 4- Blake Sims managed the Tide to another win. Florida's defense should give Lane Kiffin the challenge we've all been waiting to see next week in Tuscaloosa. And your Nick-Lane update, "Look at this guy..." 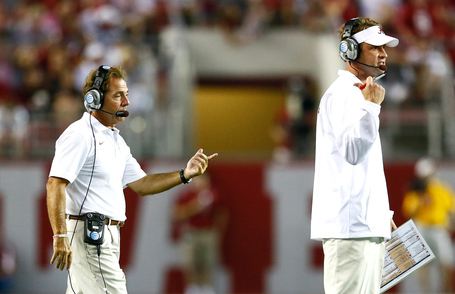 4) LSU (3-0) LW: 5- No issues this week with the UL Monroe, as the defense pitched a shutout. Again, as is the theme of the week, the Bayou Bengals will host more of a challenge next week with Mississippi State's more competent offense coming to town.

5) South Carolina (2-1, 1-1) LW: 12- The Gamecocks began their resurrection to a so far disappointing season by the slimmest of margins, two missed field goals and a space thinner than the ice Will Muschamp is skating. 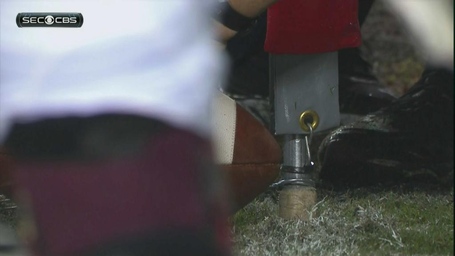 6) Ole Miss (3-0, 1-0) LW: 6- Due to some nice scheduling and the misfortunes of others, the Rebs hold the No. 10 spot in the country. The defense is high caliber; it's the offense that would concern me against a more equally talented opponent.

8) Mississippi State (3-0) LW: 9- An SEC team shouldn't have to travel to play a team like South Alabama. Come on.

9) Arkansas (2-1, 0-1) LW:10- It may not exactly the signature win we want this season, still waiting on that first #Bert-led SEC win. But it was a good win in front of a national audience. The Georgia-South Carolina game being delayed helped add to the number of eyes watching. Like I said during the game on Twitter, you can have your HUNH. Running it down someone's throat  and them not being able to stop it is so much more demoralizing. Oh and one more thing, Dan Skipper is the man.

10) Missouri (3-0) LW: 11- Much as it has the last few games, Missouri starts out slow and pulls away in the fourth quarter. The Tigers can do this one more week (Indiana) before being tested in the SEC's other Columbia (South Carolina).

11) Tennessee (2-1) LW: 7- Not that losing to Oklahoma in Norman is something to be ashamed of, but I was probably a little too high on the Vols early on. The score of Saturday's game is not indicative as to how close this game was.

12) Florida (2-0, 1-0) LW: 8- Yikes. Muschamp gets chance after chance to prove that he's more than a talented defensive coordinator and time and time again he barely hangs on. What will be the straw that breaks the camel's back?

13) Kentucky (2-1, 0-1) LW: 13- Things appear to being headed in the right direction. Unless of course you are more of the belief that things are headed in the oh so wrong direction at Florida. More likely.