What will Arkansas have in place for the Auburn Tigers in terms of personnel and scheme? Lets take a look at what defensive coordinator Robb Smith has done against similiar offenses in the past, and what players he will have to implement his defense.

Robb Smith took over for Chris Ash at Arkansas after working as the linebackers coach for Greg Schiano with the Tampa Bay Bucs. Prior to that he was the Defensive Coordinator with Schiano at Rutgers in 2012 where his defense was 4th in the nation, allowing only 14.2 points per game. During his time with the Scarlet Knights they did not play a lot of spread-to-run teams like Auburn so there is not a wealth of information on what kind of game plan he has put together in the past.

However, there are a few games that may give a picture of what he and Bielema will throw at the Tigers this fall.

Rutgers Vs Louisville (Broken Wrist Teddy Bridgewater Version)
Bridgewater was not a threat to run and the backup Will Stein picked up a few yards by taking off but they did not run any Read concepts. They did, however, run the inside zone some but without much success.

Rutgers' front was too much for the Louisville offensive line, but Bridgewater was able to stand in against pressure on a few occasions and complete passes downfield against single coverage.

On this play Louisville runs the Inside Zone, and Rutgers has the perfect blitz call, somehow the back escapes to pick up a short gain avoiding three tacklers. The Louisville Oline is completely confused on the play. The DE to the play side and the 3 tech both slant one gap inside and the strong safety replaces on a blitz in the outside gap and is untouched into the backfield.

Overall the Robb Smith-led defense contained the Louisville rushing attack, caused turnovers and limited big plays. Bridgewater was able to make some key throws in the second half, and the Rutgers offense did not give any help to the defense in time of possession/turnover margin. 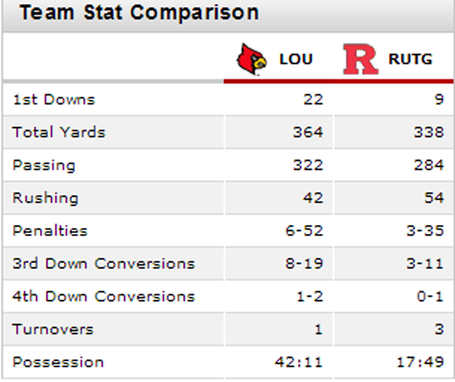 Syracuse and QB Ryan Nassib vs Rutgers (More of a Spread to throw offense than run)
Rutgers only gave up 62 yards rushing on 32 carries, but gave over 350 yds passing to Ryan Nassib. Smith's defense was able to pressure Syracuse and cause them to turn the ball over. Specifically in the run game, Rutgers sent edge blitzers from the field and boundary to disrupt the Zone Running game. The problem areas came in a similar fashion to the Arkansas vs Rutgers game in 2012 - man to man coverage over the middle where the QB was able to get rid of the ball before the blitzers arrived.

Here is an example below where Smith calls a base defense on 1st down. 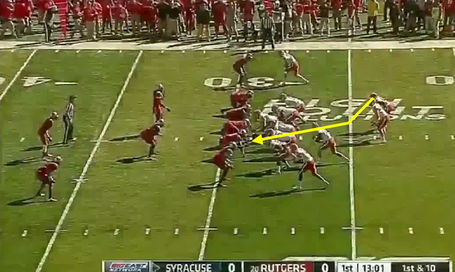 He has his front aligned in the usual odd front with a 1 and 3 tech tackles. His DEs are lined up on the tackles. Corners are in press bail technique and what looks to be a Man Cover 1.

Another where the Syracuse RB is stopped in the backfield. 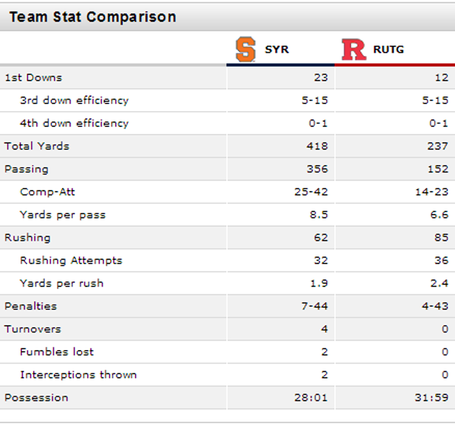 Keys to defending the Auburn version of Inside Zone:

"Anytime you play a defensive structure where your force player is a second, or more importantly third level player (like a Safety) it's important to train your players to identify crack blocks on the perimeter. Once an offense knows you're supporting the run with a third level player (which will be the case with Robb Smith's quarters coverage safety) they will do their best to try and block him with a receiver.The way to keep that from happening, defensive coaches work hard on identifying and playing crack blocks. Most teams run a "Crack/Replace" drill. It then becomes the corner's job to set the edge while the safety runs the alley. Its predominately used against perimeter run oriented teams that utilize fast flow schemes like flash or jet sweep." (Auburn) xandolabs.com

Auburn likes to do this when teams are packing 8 and 9 players in the box.

Auburn combines these concepts: Inside Zone, Read, and the Jet Sweep/Buck Sweep to take advantage of the overpursuit of the linebackers. Throw in the quick bubble and other less used plays, and it is apparent why teams have such a hard time.

Outline of my opinion of what the Bret Bielema and Robb Smith game plan will be this fall:

Many defensive coordinators have a false belief that they can stop it with a base defense. Auburn always seems to have an answer to your game plan...a chess match of sorts with Malzahn; five, six moves ahead eyeing checkmate before you realize your king is in check. He takes the play calling to a point where he and his staff are matching up against the ability of the defense to adjust on the fly.

The offensive line is as good as any in the country and hold the key to beating Auburn. Florida St. was able to defeat double teams at the point of attack with their DTs at times causing havoc in the backfield. That still left them with a last second TD for the win.

This is what I believe the Arkansas Defense will put on field on Aug 30th.

Brooks Ellis and Martrell Spaight in the middle must be more patient than the MLBs were last year. Reading flow and the action of the guards up front will be key to whether they are able to make plays at the LOS. Smith will call more aggressive blitzes than Ash last season, but this could backfire if the call guesses wrong. Prepare yourself now for some tackles behind the line, and a few plays where the linebackers shoot the A or B gap and are not able to make a play on an outside run.

Braylon Mitchell on the outside will be a matchup that will also turn out to be vital. Auburn may go at him right away where his strength is in playing within the tackle box, and Malzahn will very likely call some bubble screens/quick outs to test him in coverage. If this happens Arkansas will probably revert to a Nickel Package with either a third safety or TQ Coleman in that spot.

Up front it will be all about the tackles. Darius Philon, DeMarcus Hodge, Taiwan Johnson and incoming freshman Bijhon Jackson will be in the spotlight from the first play. They will face double team after double team while rotating out against the fast pace. Auburn did not really hurry up in 2013 against Arkansas, but I expect to see a full throttle approach this time.

In the back, the key will be in those man to man (sometimes out of Quarters Coverage) situations. Playing the Auburn receivers in wide open space and making plays in the run game when Marshall gets outside on the Zone Read will be a big part of stopping the Tigers.

Overall I am optimistic that the Razorback Defense will be able to disrupt the rushing attack to the point where Auburn will use more of the Jet Sweep, Screen, and Quick passing game. Forcing Nick Marshall to make decisions and execute tough throws under pressure should be a recipe for success. Keep in mind that success against the defending SEC Champs should be measured with a different scale than that of most offenses. Holding the Auburn ground game to under 225 yds rushing and keeping them from throwing for more than 250 will be a recipe for success in my eyes. Will that be enough to win?