This is gonna hurt

Share All sharing options for: Arkansas' Toughest Losses Of The BCS Era

As Arkansas fans, we know a little bit about the sting of defeat. It's not enough to lose. Anybody can do that. I assume, if you're a perennial bottom-dweller, it gets a little easier to stomach. But for a loss to hurt in a real, lasting way, there has to be an element of belief and the stakes need to be high.

We specialize in this. Though none of the losses on this list may rise to the level of The Game Of The Century (which, according to family lore, left my father unwilling to speak until the following Tuesday), we'll put Arkansas' worst gut punches of the BCS era up against anybody's.

NOTE: I'm not a sadist and so I won't be posting highlights of these games.

The most obvious genesis of our current football misery would be the moment Louisville’s current head coach skidded his motorcycle off a mountain highway with his girlfriend/employee in tow.

But this was the night when we began to understand the state he’d left us in.

The Hogs, off the heels of 21 wins in two years and an impressive Cotton Bowl showing, opened the year as a top-10 team. But by the time Tyler Wilson left the game shortly before halftime in second game of the year, it was already apparent this team had issues. The running game was struggling to get going, Knile Davis was clearly not back to 2010 form, Wilson was getting hit hard and often, and the defense was bending far too often.

In the second half, the damn broke. Murphy’s Law couldn’t have predicted such a sequence after the Hogs took a 28-7 lead in the third quarter.

Without Wilson, the team came apart. Dennis Johnson averaged over seven yards per carry, but mysteriously received only seven carries. Brandon Allen was clearly overwhelmed when things started to go downhill, but for some reason the staff continued to put the game in his hands. He passed 20 times in the final two quarters and OT, completing only six.

Meanwhile, ULM QB Kevin Browning was having his way with the Arkansas defense, completing 42 of 67 passes for 412 yards and rushing for 69 yards and another TD.

Midway through the fourth quarter, the eventual outcome seemed like a foregone conclusion. Shortly thereafter, Browning scrambled in from 16 yards out on 4th-and-1 in the first overtime, ending the game and our illusions that everything was going to be OK. 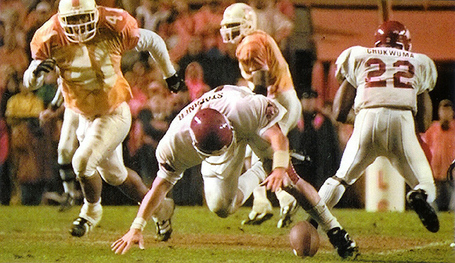 They say time heals all wounds. Might sound trite, but I know it's true based on the fact that this game was not unanimous gut-punch selection among our panel.

On one hand, I get it. They were No. 1, the eventual national champ, and were playing at home.They were supposed to win.

On the other hand, how might our fates have differed if Arkansas (which was an undefeated top-10 team at the time) pulled off the upset?

Also, we blew a 21-3 lead, lost in the flukiest of ways and seemed totally deflated for the rest of the season.

You already know what happened. Stoerner tripped over a lineman's foot, reflexively attempted to break his fall with the ball, Tennessee recovered the fumble and went on to score the game-winning touchdown in the waning moments.

But what about all the missed opportunities in the fourth quarter?

- A field goal attempt blocked on the next play

By the time Stoerner stumbled, you could sense how it would end, because while Stoerner vastly outplayed Tee Martin on this day, the Hogs couldn't stop Travis Henry and he was only getting stronger as the game went on. He carried five straight times following the fumble recovery, covering the last 43 of his 197 rushing yards and scoring the game-winner from 1-yard out.

All they needed was a field goal, and all we needed was one first down.

I can watch the fumble. It's unavoidable. You see it any time people talk about Tennessee's national championship or the SEC's great games or how all teams need to get lucky from time to time. I'm deadened to it.

But to this day I've never rewatched what happened afterward. I probably never will. Once was too much. 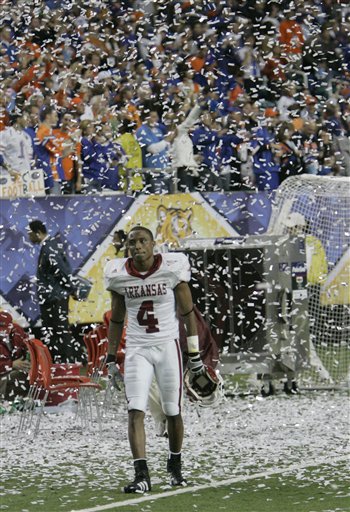 Arkansas had previously played in the SEC title game in 1995 and 2003, losing by a combined total of 64-6 to Florida and Georgia, respectively.

And when Florida raced out to a 17-0 lead in the 2006 championship game, it looked like little old Arkansas was being put in its place again.

But this was a different Razorback team.

After getting embarrassed by USC in the season opener, the Hogs won 10 straight. A 31-26 loss to a top-10 LSU team in the previous week had crippled any hopes of something bigger, but we still had an elusive conference title to play for.

It seemed to rejuvenate the Hogs. The running game was struggling (McFadden 21/73, Jones 14/57), but the defense helped out with a pair of interceptions.

Arkansas cut the lead to 17-14 when McFadden hit Jones for a 2-yard touchdown pass early in the third quarter, and the Hogs took the lead soon after when Antwain Robinson returned an interception 40 yards for a TD.

And then, Reggie Fish.

It's his muffed punt, recovered by the Gators in the end zone, that swung momentum back in Florida's favor, and it's up there with Stoerner's fumble in moments of Razorback infamy.

That's fair. It was a bad (terrible) decision to try to float back inside the 3-yard line and try to field a punt Willie Mays style. It was made all the worse because Arkansas fans, conditioned to expect the worst, could see it happening before our eyes in slow motion.

But it was just one of many special teams gaffes in this game. The Hogs had a punt blocked in the first half and just before Fish's ill-fated moment, we allowed Florida to convert a first down on a fake punt. If we stop them there, we've got the ball in Gator territory, and the most memorable moment of Reggie Fish's career would've been the Hideaway-Reggie Run.

The Hogs stayed in it in the fourth. After Percy Harvin (who we had no answer for) sprinted around right end for a 67-yard TD early in the quarter, Arkansas cut the lead back to three on a reverse pass from Cedric Washington to Felix for a 29-yard TD.

But we never got closer. Florida tacked on a touchdown on their ensuing possession and soon after the bowels of the Georgia Dome were reverberating with monotonous Gator chants.

On one hand, Arkansas proved they belonged with the big boys in this game. Florida would go on to curb-stomp Ohio State in the National Championship game, touching off the SEC's streak of dominance.

On the other hand, the loss -- and specifically the way we lost -- seemed to serve as a reminder that the Hogs remain snakebit. After winning 10 straight and nearly running through the SEC unbeaten, the 2006 team lost its last three, capped by a lackluster 17-14 loss to Wisconsin in the Capital One Bowl. And afterward, all the drama that had been festering throughout the season with Malzahn, Mustain, et. al, finally boiled over and signaled the beginning of Houston Nutt's demise.

And you can't put all of that on poor old Reggie.

Brent Holloway is a lifelong Hog fan originally from Smackover, AR, home of Clyde "the Smackover Kid" Scott, Jonathan "Pookie" Modica, and about 2,000 other Buckaroos with a flair for colorful nicknames. Remember the bad times with him on Twitter, @thebholloway.