So the Nicholls game is upon us, which we have all been anticipating since.....well, since we ran out of stuff to talk about from the Auburn game. Sorry I just can not do the usual "This team needs to do A. B. and C. to win" breakdown. Arkansas should put up 60 at least. So anyway let's take a look at what the offense and defense did last week in terms of receiving targets and what will be worked into the game plan on Saturday.

So you might have heard, there were a few key drops last week at Auburn as you can see in the charting data from the project that Bill C. at Football Study Hall put together. Take a look at the full game chart here. Lets hope that this game is a good way to get those out of their system.

I really think Keon Hatcher and Demetrius Wilson will need to keep that rate in the 5+ range for this team to be successful. Obviously Hatcher needs to catch at least half, a couple of his targets were uncatchable, but he dropped the wide open ball that would have been a huge gain if not a touchdown. Derby looked good in play action and on a few short throws which was a pleasant surprise. Henry was asked to be more of an inline blocker against Auburn and it seemed to take a toll on him toward the end of the game. If he is healthy against Nicholls it would be nice to see him used more in the passing game.

Q: What's the difference between an Arkansas football player and a dollar?
A: You can get four quarters out of a dollar.

It seemed like the team just fizzled out in the second half, some of it was a change in play calling, but mostly poor execution and fatigue. In the SEC grind that starts after these non cons, they must play a full four quarters. I wouldn't be surprised to see some guys in the game later against Nicholls in order to further develop that attitude. At Wisconsin, Bielema had no problem with putting a big number on the board against lower caliber teams, and playing experience for this team is not all that high.

Onward to the Next Opponent, Nicholls Colonels:

They were beaten by Air Force and only rushed for 63 yards. Arkansas will be able to run anywhere they want on the Nicholls defense. Playing a lot of guys and building depth should be the a goal, as it will be needed down the road. Ultimately, just win the game easily and build depth for the rest of the season. Let's not complicate this. 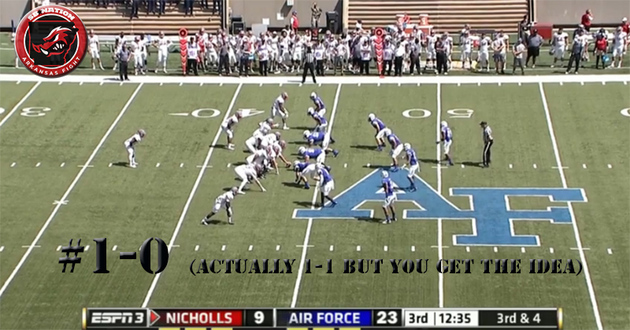 The Young Defensive Backs: Henre' Toliver, De'Andre Coley, and Josh Liddell
These guys should get some quality playing time and after the Auburn game there may be a change in the number of reps. I will be watching specifically to see if Liddell can step up and make some plays on the ball in the air in situations similar to what Auburn did last week. Can he play sound technique in both run and pass situations?
Wide Receivers Getting on Track: Keon Hatcher, and Demetrius Wilson made some mistakes last week but also made a few nice catches. Consistency from this group will go a long way toward improving the overall function of the Arkansas offense. In a game like this one I want to see if Drew Morgan, Jared Cornelius, and Cody Hollister can get open with ease. Against a secondary that should not be as talented this group is expected to have a field day.
Dominant Defensive Line: Watch the big guys up front to see how they are able to get a push into the backfield against a smaller offensive line. It should be similar to what Texas Tech has in their lineup.

It will be 357 days on Saturday since Arkansas had a W, 357 days. If that is not motivation to go out and beat a team that is less talented in front of your home crowd then you need have your pulse checked. It is time to put on a show, give the fans something to overreact to, and something positive for the team to build on. Getting some playing time for the newcomers and the backups will be a huge benefit. What specific areas of the team will you be watching on Saturday?