Sometimes we have to reach a bit for reasons to hate the opponents we play so rarely, but with enough digging, we'll find some.

Share All sharing options for: Reasons to Hate: Northern Illinois 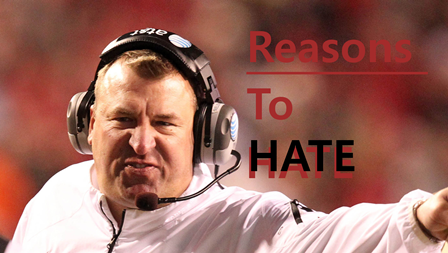 (Note: We're aware that our coach and AD both qualify as such on technicalities such as birthplace and longest places of residence, but they're both on our team, so, forgiven when they're winnin!)

2. They got to play in the Orange Bowl

As the #16 team in the country and MAC champions, the Huskies earned a bid to play Florida State in the Orange Bowl following the 2012 season. They lost 31-10.

That's all fine and well, but that was only possible because of the rule that only two teams from a conference could get into the BCS, keeping higher-ranked teams, like Arkansas in 2011, out of the nation's elite bowl games. But to be fair, the Huskies did beat Arkansas State in the GoDaddy.com Bowl in that 2011 season, so that's cool.

Whenever a MAC team plays one of their trademark weeknight games we all have to deal with #MACtion blowing up our timelines. We need to start #BieleMACTION. If Arkansas wins Saturday, we're rolling with #BieleMACTION all over the Twitters.

Another sport was pretty dominant in Arkansas culture in 1994, so it's easy to forget the Hogs and Huskies have actually played that year. Northern Illinois was one of Danny Ford's four big victories in that dreadful 1994 season, but it wasn't by much. Arkansas eked out a 30-27 victory. (note: if anyone was at the 1994 game, I would really like to know why you were there,  and if you had any fun)

Dekalb, home of NIU, is very close to Chicago, so OBAMA

Go back and look at his picture at the top of this post... I'll wait.

Do you hate him now?  ...I know.  I just can't get up the hate for him.  In fact I wish him a lot of success starting on September 28th.  I don't even want him to lose out and have to find a new job.  Don't worry guys we'll find some coaches to hate again REAL soon.