Coming out of the first half up a touchdown on the road, this drive set the tone for the rest of the game. This signature drive combined some inside the tackle grind it out with a few outside runs, a few playaction passes, and capped off with Brandon Allen's TD scramble.

Share All sharing options for: Xs and Os Breakdown of the Big 2nd Half Drive vs Texas Tech

Arkansas was fortunate to go into halftime up a touchdown after Martrell Spaight's interception set up an easy score to overcome the normally-disastrous double reverse fumble.

That set up the Hogs to have the ball up a score to begin the half, and the drive proved to be monumental for Arkansas, who was forced to overcome multiple 3rd downs and a 4th down. Here's how the Razorbacks moved the ball right down the field and went up two scores, never to be seriously threatened again.

Leading 28-21 the Razorbacks lined up in a shotgun formation with Alex Collins in the backfield. This play is the definition of throwing when they want to instead of when they are forced. Collins makes a good block on the edge in pass protection and Allen makes the perfect read and has an easy throw against soft coverage. All the receivers are running comeback routes looking to find an opening in the zone. When teams are expecting a run on first down and the corner has a deep 1/3 or 1/4 it makes these 5-6 yard gains easy, and Wilson has the athleticism to turn it into much more.

They come back with 2 backs and 1 TE. Tech is in a base 4-3 stack look, and is playing run, but the DE lets Hatcher get outside on the reverse. Arinze becomes the lead blocker around the edge for another big gain. He doesn't really throw much of a block, but Hatcher has the open field skills to make people miss. This play is not a trick play or gimmick, it is no different than a sweep, or counter to the outside.

This lead counter play puts Collins behind Tretola and Arinze leading through the down blocks of the Strongside tackle, guard and center. The Tech LBs read and fill perfectly but theres just not much they can do. Tech has 8 at the line and even send a corner late off the edge but still cant keep Collins from picking up 6.

Hard to complain about his overall performance, but Derby missed one here. He tries to go low and the DE makes a good play to avoid, and keeps Williams from getting outside. If he was able to turn the corner it could have been another big play with Skipper leading out front. 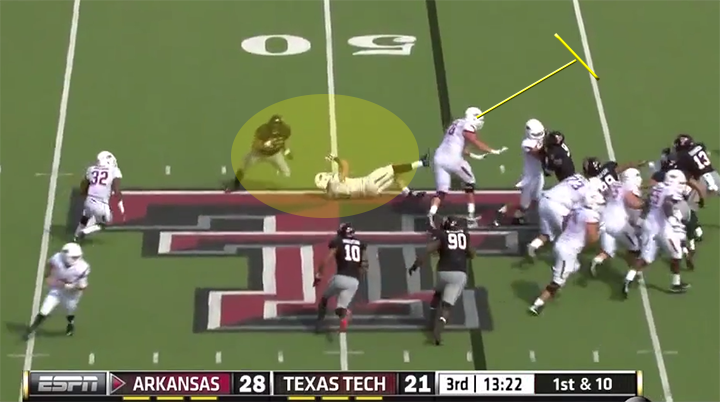 Arkansas gets behind the chains for the first time on this drive, so what do Chaney and Bielema dial up? Just the same lead iso play they have been hammering Tech with all day, adding a small wrinkle where Hunter Henry blocks down inside on the linebacker. Williams also has the power to run through arm tackles to pick up tough yards after contact.

Arkansas gets stuffed on 3rd down with all 11 Tech defenders within 5 yards of the ball. 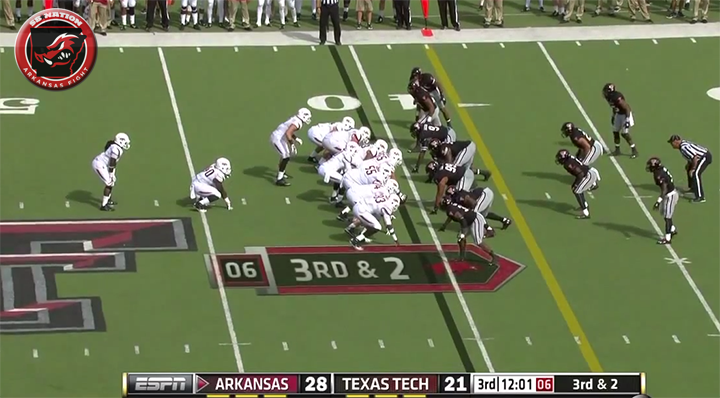 Same formation as before, just bring in JWill and run the lead play but this time behind Cook and Kirkland. Hunter Henry makes a better block and it leaves Williams one on one with the safety. Oh yeah and Arinze destroys the corner too.

Not much room to run as Tech sells out on the blitz.

Skipper and Tretola miss on the backside but Collins still fights for 5 yards. Looked like a variation of the Wham play with Derby blocking the DT instead of a FB.

Arkansas comes out in the same 2 back 3 TE look they have been showing on most of the drive. Henry and Derby are lined up on the left and the play call is the power toss. Collins looks to get outside where Skipper pulls to kick out the DE. Collins makes another signature cut and turns back up for the first down. Good blocks inside by Tretola and Hunter Henry make it possible to turn back inside 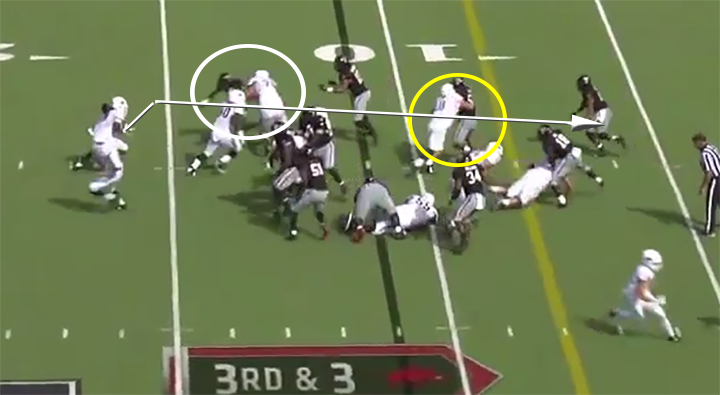 Same counter-lead play that they ran on 2nd and 1 earlier, just flipped to the other side. Kirkland pulls and leads but misses on the DE who gets off the block and makes the play. 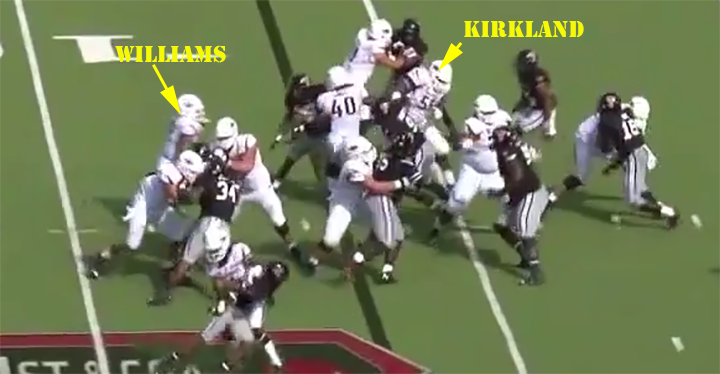 Arkansas lines up in a 1 back set with 2 TEs, and motions Hatcher into a bunch formation. Henry is lined up on the LOS and runs a route to the corner of the endzone. Hollister runs a shallow cross that if Allen put it low could have scored. Instead Henry is unable to get a foot down. This is a good red zone play where the reverse action freezes the linebackers and enables 1 on 1 coverage. I bet we see this one again. 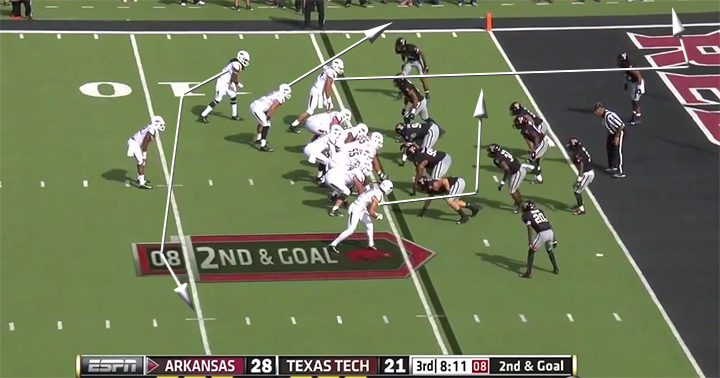 3rd and Goal at TTU 5 Brandon Allen run for 5 yds for a TD, (John Henson KICK)

The final play of this drive was almost a disaster. After a timeout Chaney and Bielema bring in Jared Cornelius and put him as a wing. They ran this shovel pass play late in the game against Nicholls where he was able to get a big gain. Out of the shotgun they are in a 1 back 1 TE set with Korliss Marshall as a decoy on the playaction. The Tech Dline runs right by Cornelius but Allen is not able to drop it off to him, and on his 4th pump fake decides to take off for the endzone.

Not exactly how it was drawn up but Allen makes them pay for being overaggressive. This drive in my opinion sums up the philosophy that Bielema has instilled in this team. Grind it out until the other team quits or makes a mistake. In this case they just had no answer for the counter lead, and toss play. Hope we see more of this in the weeks ahead.