Arkansas goes to Columbia looking for another SEC road win.

Share All sharing options for: Arkansas Razorbacks vs Missouri Tigers Preview: Round 2

It's always interesting when Mike Anderson goes back to Columbia, but this time, there could be much more on the line than just a fan base out for further revenge against their former coach.

This game could make the difference in the minds of the NCAA Tourney selection committee. A split with Missouri and a pair of wins at home against LSU and South Carolina would boost Arkansas' resume. Winning at Missouri might also alleviate some of the constant road fears that have haunted Arkansas fans for several seasons. 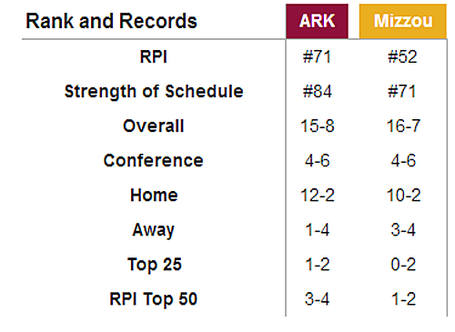 The RPI will be good enough as long as this team can win the games they are supposed to and win; and at least three out of Missouri, LSU, Kentucky, or Georgia.

Keys to the game:

- Missouri forward Jabari Brown scored 24pts vs Arkansas in the first matchup this season and was 4-5 from 3pt range. He  then scored 33 pts in a loss to Kentucky. For Arkansas to win they must keep Brown uncomfortable in the half court game. Defenders must run Jabari Brown off the 3PT line, make him drive and become a passer.

And when Brown does drive help defenders must be ready to step in front.

- Rebounds. Arkansas must not get out rebounded and give up second chance points. The only way Arkansas can expect to win is by not getting out rebounded by 16 as they did in the first matchup. Missouri is not a particularly great rebounding team on the season, so it is possible.

As you can see below, Michael Qualls production has been the definition of inconsistent. His PPG chart looks like the Arkansas weather, up and down up and down.

He seems to disappear in some games, and at other times play to a level that is equal to the best player on the floor. For this team to win against Missouri and down the stretch the play of Bobby Portis, Michael Qualls and Coty Clarke must be more consistent.

Qualls has all the skills necessary and is a fearless, clutch shooter. He as well as the entire team just must find a way to be consistent. The first step after beating Vanderbilt on the road is to show they can follow that up with a win in Columbia in a hostile road environment. No doubt Mike Anderson has been telling his team something similiar all season.

What will it take for Arkansas to put together a run in the next couple of weeks and go into the SEC tournament on a high note? For this game, not getting out rebounded by a double digit margin, and playing solid half court defense against Brown and Clarkson are vital. Those are the same points that have been said all season, but the numbers were worse than usual in the first game.

Missouri comes in to the game on a three game losing streak, and has not lost back to back games at home since the 2007-8 season under Anderson. Arkansas will be playing a highly motivated team and will need some help from Missouri to win in Columbia.