Do some Arkansas supporters want to play coach roulette? Is that it? Keep changing the head coach until one instantly clicks?

Share All sharing options for: Razorback Athletics Rebuilds With Consistency, Not Change

Regardless of what you feel about our current (name the sport) head coach, the only change Arkansas needs is the percentage of fans who support the efforts of the program.

Coaching change? It already happened. Too often. Change at the top came frequently enough to undermine the stability of the program. Both football and men's basketball were traumatized by abrupt, unplanned change. It unavoidably undermined talent flow, recruiting ties, and the fit between rosters and coaches.

The state of the _______ program requires consistency for an extended period of time. Our teams need to rebuild their identities. A vital element of that identity always has been the unified face of Razorback fandom. Nobody ever admired Arkansas for people willing to squander time and money filing FOI requests, or paying for attack banners to fly over stadiums. Arkansas's advantage was that playing in Fayetteville or Little Rock was like parachuting into Russia (which still is a scary thought, regardless of what they call their form of government). We had this little world where the Razorbacks were a religion. Outsiders were rattled by the strangeness and intensity of what was going on here in remote isolation.

Many good athletes wanted to be a part of that. It does not exist anymore. What do we have now? Whatever we build.

I am not writing this as the opening statement of "the Razorback fan bible." Not preaching, not telling people what to do. This is the conclusion of my analysis, based on 40 years of twists and turns in U of A athletics. At a place like Arkansas, belief needs to come before proof.

Some fans believe Arkansas could hire the "right" coach, who would bring an instant talent infusion and set the ______ program on a new, exciting course. Most among that tiny, vociferous minority believe the change process starts with hiring the "right" athletic director. Well. Arkansas's legacy of success-beyond-our-means was disrupted enough that we did not even have a succession plan for Frank Broyles. We had no one in the family who was a natural successor. Had decades to plan, arrived at the moment of truth, and the chamber was cold and empty.

What core ideals were lost? Can they be recaptured? Jeff Long has played an important role building administrative infrastructure that was impossible in the tiny-budget days. Things are managed with more of a long-term perspective. Culturally, the new leadership still has a mercenary feel to it, arbitrarily imposing brand, marketing and gameday experience changes for coldly -- sometimes shallowly -- calculated purposes. Booster relations and season ticket management were yanked out of the "gotta know somebody" days, but that was replaced with an overly aggressive, moving hurdle that many donors cannot or do not want to chase.

We can microanalyze everything that has happened, and that becomes all-consuming sport. The rate of change elevated booster expectations, rather than making them more realistic. Let's face the truth.

Arkansas fired Jack Crowe without having a replacement plan.

Arkansas fired Danny Ford without having a replacement plan.

Arkansas fired Nolan Richardson without having a replacement plan.

Arkansas fired Stan Heath without having a replacement plan.

John Pelphrey's hiring was the end product of a disastrous, embarrassing process that included our Plan G hire bowing out after one day.

Arkansas fired Houston Nutt without having a replacement plan.

Our replacement was going to be run-oriented Jim Grobe, who backed out of the job after saying yes.

Bobby Petrino fell into our laps, but the nature of his transition saddled him with disadvantages most schools would deliberately avoid.

Petrino failed off the field in too many ways, crippling our football program regardless of whether he would be allowed to stay.

Football fell another year further behind in the 2012 season in limbo, necessary due to the timing of Petrino's firing, when a permanent hire would have been drawn from a severely limited field.

Long took it upon himself to decide Arkansas needed to reverse course again in football, hiring in Bret Bielema a head coach whose philosophy and style were a 180 from Petrino (who had been a complete reversal from the Houston Nutt program).

Don't oversimplify it to "Big Ten coach." By all accounts, Long gave less thought to football style than to resume, aiming for the most accomplished coach he could get. Bielema had many strong points -- record of overachievement at every level of his career, BCS experienced but still young, great references and pedigree. The style change was a consequence not a deliberate selection, and if Long should be second-guessed, it's on that fact alone.

The direction change complicated the process of getting Arkansas fans to buy into the new program -- not so much in August but in September and October. Naturally, many people realized they were not asked whether they wanted to watch the Razorbacks embark on a path away from 300-yard passing and high numbers on both sides of the scoreboard. A near-complete lack of success underscored the difficulty of change.

Football gets to its last home game, a winnable game against Mississippi State in Little Rock, but War Memorial has long since relinquished its status as a feared place with a raucous crowd. Noise wasn't even a minor issue for the Bulldogs, and in an overtime loss it's obvious the home advantage was missed. 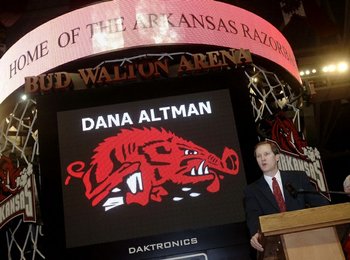 In basketball, Mike Anderson returned after Heath and Pelphrey had erased any connection the Razorbacks had to their most successful major-sport coach ever. Anderson returned to a program where abrupt change was impossible. Academic progress requirements elevated the immediate need to graduate players rather than dismiss them. SEC rules government junior college transfers were more restrictive than what Anderson had faced in the Big 12 and CUSA, throwing up another barrier to change.

This is why in Anderson's year three, he still carries some players who do not fit, and he won't have his roster in shape until year four. Meanwhile, home fan support has not reversed the downtrend it began in Nolan's latter seasons. Only now, half-full is regarded as a good turnout. This impresses no one.

Fans who paid money to experience repeated disappointment reevaluate their priorities. Understandable. But let's acknowledge the state of Razorback athletics.

Football and basketball need consistency more than change. They need to put together a string of seasons where stable coaching staffs recruit complementary players, working toward long-term goals. Both teams are still in the process of repairing talent shortages caused by too-frequent disruption.

These programs are not better off if their head coaches are measured on a year-by-year basis, much less the hourly reconsideration one can read in social media and fanboards. In recruiting, they already face headwinds and truly need all the help they can get. Realistically, recovery could take many years.

Zealous fans can wish for a quick fix, but even that requires that the previous leadership leave a good-looking corpse. Past Razorback greatness, at this point, serves only as fertilizer. It is time to replant, and we need trees more than grass.

Chances for success are low -- without the disproportionate fan support that gave tiny Arkansas a prayer of hope against the giants in the first place.