The Weekend That Will Be: Rivalry Week

It's that time of year again...

Share All sharing options for: The Weekend That Will Be: Rivalry Week

It's time to pull out all that leftover hate from the last year and warm it up because it's Rivalry Week. If anyone tries to tell you that any other sport has better rivalries, sit them down and let them watch the next 36 hours of football. It gets no better than a weekend such as this.

After running back Ezekiel Elliot's postgame rant after a loss to Michigan State last week, expect to see a minimum of 30 carries. His touches will be necessary because the Wolverines will provide the Bucks their stoutest test yet. The Michigan Resurrection will remain only two steps short of completion in Year 1 with only a B1G and national title outstanding

Bedlam this year will determine positioning for the College Football Playoff and more eyes will be watching than usual. The Sooners could be without their Heisman candidate quarterback Baker Mayfield which could spell disaster on the road. But if he goes, they're one of the most complete teams in the country.

Both teams are on the outside looking in with the possibility of a national title run still on the table. That said, even a win here will not guarantee a spot in the playoffs. This is also the best chance for Stanford's Christian McCaffery to display to the country why he is a well-deserved Heisman candidate (and my favorite). Also of note is that Kevin Hogan will participate in Senior Day activities, a long time coming since it feels like he's been there for a decade. 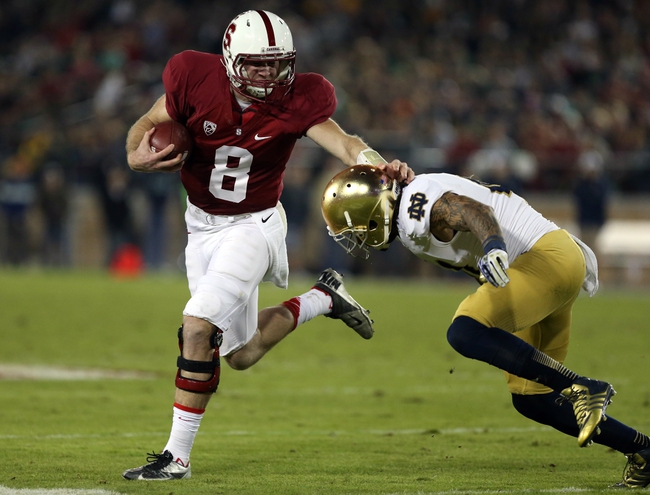 The Gators' struggles over the last few weeks against opponents such as South Carolina, Vandy and FAU have been well documented. And since losing Jeff Driskel, the offense as been mediocre at best. Halloween was the last time Florida looked like a division winner (and also their last truly meaningful game).

I'm sure Gary Pinkel is a great guy, but the last thing I need this Thanksgiving Weekend is to have the Razorbacks lose to drop to 6-6 on the season. That new trophy will look right nice to next The Boot, and Arkansas can boast an undefeated record against the SEC East with the win.

The Egg Bowl was once a very regional game with only a few people outside of the Magnolia State caring about the outcome. At it's current state, with plenty of NFL talent on both sidelines, the rivalry has been boosted in recent seasons. If Auburn can pull off a miracle, Ole Miss could play in a rematch with Florida in the SECCG. Not likely, but it is rivalry week.

Mississippi State the clear favorite in the Egg Bowl. How can you bet against this guy? pic.twitter.com/Ivm98F6S9o

Injuries have not only decimated these teams but also the importance of this game. This was supposed to be the Game of the Season with the winner locking up a spot in the playoffs. That was when we thought Auburn was going to roll through the SEC and Ohio State's offense would be unstoppable. These are still two good football teams with bowl implications on the line but the game does not offer the same cache we thought it might.

Nothing to see here. Alabama wraps up its season with a total demolition of its No.1 rival. Harvey Updyke will not be in attendance.

Color vs. color is the best part of this rivalry

Maybe in their second attempt, the Bulldogs will handle a triple-option team with more authority. After being pushed to overtime last week by Georgia Southern, Mark Richt is facing truly a must-win situation. That said, Southern may actually have a better team than the Yellow Jackets this season.