The Arkansas Passing Game, Jim Chaney Naked (Bootleg) And What to Watch Vs Auburn

Share All sharing options for: The Arkansas Passing Game, Jim Chaney Naked (Bootleg) And What to Watch Vs Auburn

What better opportunity can a team ask for than this Auburn game for the Arkansas Razorbacks. The chance to play a team that was 13 seconds from winning the National Championship in the previous season. Coming out of the tunnel onto the field in a hostile packed stadium as the team pauses, will the thought of a major upset and its implications creep in to Bret Bielema's head? Will the players be able to keep the energy focused and not make mental mistakes?

An even bigger question in this game will be whether each team can stop the run and for the Arkansas offense, whether they can be productive in the passing game. No doubt the play calling will still be dominated by the rushing attack, but the biggest upgrade the Hogs need will be the ability to pick up key 3rd-and-medium-to-long yardage plays. This, combined with an occasional home run play for big chunks, would create an even more potent rushing attack. Sputtering like last season with turnovers and quick 3 and outs will end in the same result against a very talented team.

How Arkansas Has To Game Plan For Jeremy Johnson

However long he is in the game, Johnson will bring some different skills at the QB position.

Extinction of the Fullback in College Football

Chaney has been using "Bunch" and "Naked" for a long time:

All the way back to 1999 when Jim Chaney was at Purdue with Drew Brees and then Kyle Orton his offenses have been based in three receiver sets whether spread or in its current form with tight ends involved. In the play action game he still uses many variations of the naked bootleg that began back at Purdue under Joe Tiller.  It's sort of hilarious that Cradle of Quarterbacks is trademarked by Purdue University, but they probably think the same of our "Hog Call" trademark. Anyway, they did put together some impressive passing numbers over that time and Chaney has carried many of those tools along with him to Arkansas. 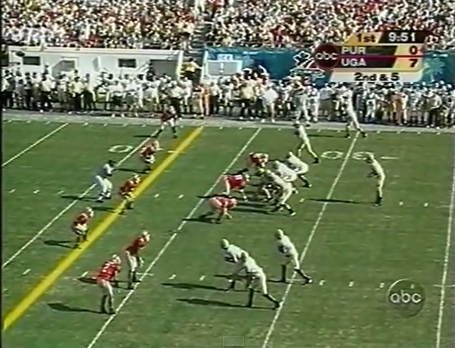 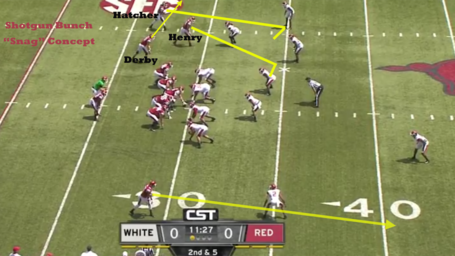 Only difference is instead of an empty set at Arkansas Chaney has stayed in a 1 back shotgun. The personnel is also different with two tight ends involved instead of 4 and 5 wide receivers but the concepts are identical.

The "Naked" bootleg concept was used in Fayetteville last season against the Tigers on the opening drive, without much success here:

And with a little more success here. The whole purpose of this scheme was to force the backside pass rusher to hesitate:

It is my opinion that this will be a part of the game plan against Auburn in addition to the bruising running game. Also keep an eye out for Korliss Marshall sneaking into one of these bunch sets for a reverse.

Sam Linebacker: Braylon Mitchell, TQ Coleman, or a Nickel in the game?

A big key to this game will be whether Arkansas can play Mitchell as a Sam linebacker at the line of scrimmage in the under front. Below is an example of what the under front looks like versus a typical Auburn formation. Last spring I talked a little more in depth about what it would take to stop the Inside Zone from this front. If Auburn is able to throw the ball on quick screens, verticals and crossing plays, Arkansas will be forced to change personnel. Can Mitchell cover a tight end down the field with little to no safety help? Keep your eyes on this position and what transpires in adjustments throughout the game.

Arkansas Coverage VS Trips: Florida State left the slot uncovered when bringing pressure in the title game. If Arkansas wants to bring the same blitzes from the field, they will need to stay sound against vertical routes. Watch for the SS creeping down to fill in the alley against the run, and whether he is able to cover the slot when they call play action. 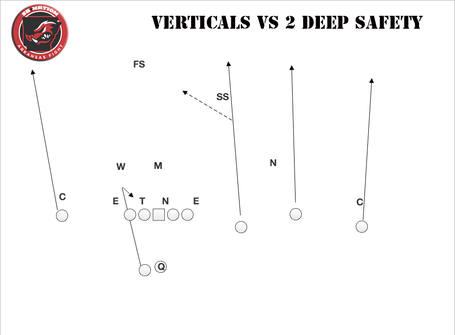 This was Auburn's response to pressure last season, and if Smith has some success in getting tackles for loss or pressure on the QB they will most likely adjust this way.

Watch the double teams on the Arkansas defensive tackles: If Philon, Hodge, Jackson, and Johnson are able to split double teams and cause havoc in the backfield the Auburn running backs will be forced to cut back or bounce. Auburn wants to double then slide to the second level. Keeping the linebackers free will be an important aspect

How to Slow the Auburn Rushing Attack 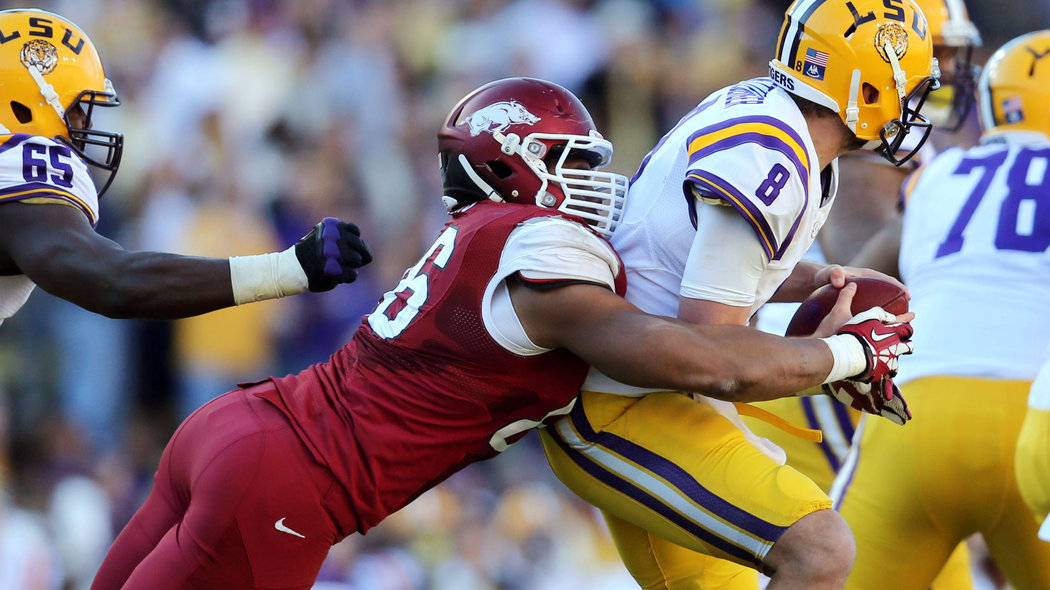 My prediction for Arkansas' defensive game plan against Auburn:

This game has been talked to oblivion, every aspect repeated and covered in detail. All we can ask for is a solid performance by the defense and repeat performance by the offense minus the turnovers in 2013. What that results in on the scoreboard, who knows?