After cruising to an easy win over Ole Miss will Arkansas be able win another road game at Alabama?

We'll start this by saying if Arkansas shoots 17-for-30 from three point land, all other analysis of this game is irrelevant. The Razorbacks could beat anybody playing like they did against Ole Miss. That was a special performance.

In the final game of the regular season Arkansas will travel to play Alabama. The first matchup resulted in a 7 point win in a beautifully terrible shooting game for both teams. Other than Bobby Portis and Rodney Cooper for Alabama the basket was virtually sealed shut. Portis blew up for 35 pts and made more field goals than the entire rest of the team combined.

The first win over Alabama was the turning point of the season for the Razorbacks.  From that point this team has been 8-1, with the only loss by 1 to Missouri in a game that most everyone thought they had very little chance of winning at all. A win over Alabama would most likely not change RPI much even though they do have a #2 SOS, but more than anything it would allow them to carry momentum into the SEC Tournament.

Here's a basic rundown of both team's standings heading into the regular season finale. 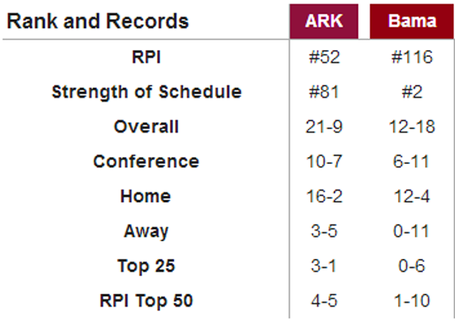 Some think a win on the road over the Tide could lock up an at-large berth in the NCAA Tournament for the Razorbacks. That could be so, but a lot of that will be determined by what happens with other teams around the country. If Arkansas is truly among the "Last Four In" as Joe Lunardi says, the Hogs can't afford a loss to a team outside the top-100. That would put a lot more pressure on them to make a run in the SEC Tournament.

This Alabama team is what the Razorbacks have been throughout Mike Anderson's tenure  up until midway of this season. The Crimson Tide have not been able to win an SEC game on the road, but are 6-2 at home. They've beaten some good teams at home, but lost to some terrible teams on the road. This pattern sounds all too familiar from the last few seasons in which Arkansas has beaten Kentucky and Missouri (or Florida, Tennessee, the list goes on) at home but unable to win on the road against a South Carolina or LSU.

One important difference between the first Alabama game and how Arkansas is playing now is how well the team is knocking down shots. To expect a repeat performance of what we saw against Ole Miss is unrealistic. (Arkansas fans, unrealistic, no way!) But something in between the ridiculously bad shooting of the first Alabama game and the can't miss from half court exhibition against the Rebels would be nice. The emergence of Anthlon Bell and has given this team another weapon. Like so:

But Bell's not the only Hog playing better. Michael Qualls (2 points in the first game) has come back to life. Mardracus Wade is playing better. The whole team, in the first game, was just 1-for-13 from three point range, with Portis making the only one. Alandise Harris was the only other Hog to score more than 4 points. If not for Portis, it would be the worst game Arkansas played all year. But considering how well Arkansas has played as of late, it's hopefully safe to say the team won't do that again.

The most important stat is the fact that Arkansas averages more rebounds per game (36.3) than Alabama. (32.6) Arkansas ranks 7th in the SEC in rebounds per game and Alabama is dead last. This shouldn't be the type of game in which the Hogs get killed on the boards.

One thing that Alabama is able to do well is limiting turnovers which they are only averaging 11.3 per game. The pressure that the Razorbacks have been able to turn up in the last three games resulted in 18,16, and 18 turnovers over that stretch.

- Avoid getting killed by Trevor Releford. He's easily the best player on Alabama's team and it's his senior day. He's about a 40% three point shooter and has a two-point field goal percentage of nearly 60%. He can do it all, and has had some special moments in Coleman Coliseum. The Hogs held him in check in Fayetteville (12  points) and need to keep him from going off today.

- Keep Rodney Cooper off of the offensive glass. He grabbed 6 in the first game and added 3 threes as well. I think a significant amount of attention was placed on Trevor Releford before and that allowed Cooper to get open. Cooper, Shannon Hale, and Levi Randolph are the Tide players most likely to have surprisingly big games against Arkansas.

-Turn Alabama over and get points of those turnovers. They are one of the better teams in the SEC at not giving away turnovers with Rodney Cooper only averaging 1 per game. For the Razorbacks to win they will need to continue to create turnovers and be smart in transition.

- Take advantage of Alabama's lack of depth. The Tide don't use a lot of players, especially since Nick Jacobs, who played just 10 minutes in Fayetteville, is no longer with the team after taking a leave of absence from the team a few weeks ago.

Mike Anderson has gotten his team to play their best basketball right now closing out the season. If he is able to keep their focus and get a win over Bama and get the opportunity to play Florida in the SEC Tournament who knows what could happen. For fans looking ahead is what we do, but he has been able to keep this team focused on each individual game. The one at a time approach has worked so far and my hope is that the Razorbacks will take care of business. Will there be a let down from the run they have been on?