Very few outside of Arkansas predict a win against Kentucky at Rupp Arena. Does Coach Mike Anderson have this team coming together at the perfect time to pull another upset?

Arkansas plays Kentucky in an ESPN prime schedule spot, and to no surprise the Wildcats are a double digit favorite. A win would go a long way toward solidifying this teams place in the NCAA Tournament bubble discussion as well as a decent seeding in Atlanta. Getting that win in Rupp Arena may be borderline impossible, but this team should adopt an underdog mentality and bring a tournament intensity regardless of the odds.

It was in no way easy the first time these teams played at Bud Walton in January, and it surely won't be any easier Thursday night. To say that Arkansas must have its most complete game of the season to win would be somewhat of an understatement. Pulling off the upset would obviously enhance RPI, but more than anything else it would be proof that they were capable of an upset somewhere other than Bud Walton. 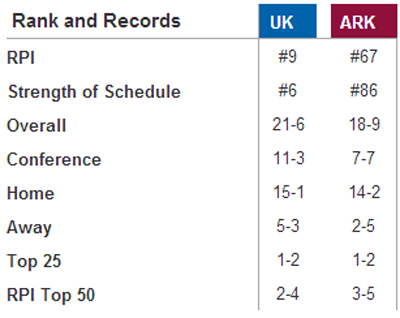 Keys to the game:

-Keep Julius Randle from easy, unchallenged drives to the paint where he is very good at drawing fouls. He's a bulldozer in the lane, and not many teams have been able to keep him from the foul line or from easy shots at the rim. LSU was able to accomplish limiting him to only one free throw in their win over Kentucky in January. He only had two free throws in their overtime win the second time around. Defending Randle without fouling and challenging his shot will be key.

-Do not force shots against Kentucky's 2-3 zone. Arkansas needs spacing and must knock down open outside shots when they're there. Some of the more inconsistent shooters like Wade, Bell and Qualls will be given open looks.

The play diagrammed below from the second half was typical of the problems they faced when Kentucky played zone. In this particular instance Ky Madden was not on the floor so the offense had even more difficulty in getting in to a set to take advantage of the zone. Alandise Harris drives, but forces a difficult shot over two defenders when the best option against a rotating zone like Kentucky plays is to drive and dish.

Haydar fades to the corner and has a wide open look with an open passing lane. 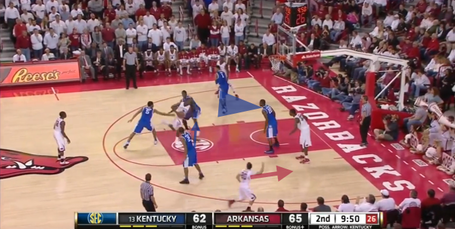 Moses Kingsley is also in position for a much higher percentage shot in the paint with a chance to draw a foul. 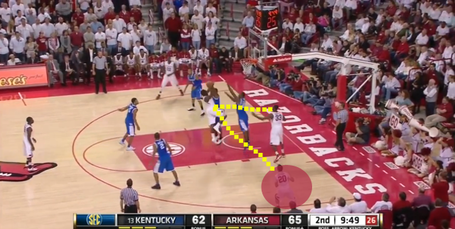 This will be an important factor in the second matchup with Kentucky. Arkansas can take advantage of this weakness in over-rotation to dribble penetrate and get several open looks. Another big key to that will be the play of Bobby Portis. Kentucky has started four freshmen this season, with Julius Randle being the leading scorer. Statistically both Portis and Randle are pretty much equal in their impact on each team.

They have identical FG% at 54, FT% at 74% and assists per game. Where the two players differ somewhat is in the paint. Randle has made over two times as many free throws as Portis and averages 3.5 more rebounds per game.

For Arkansas to win on the road once again and gain exposure in the national spotlight they will have to keep Randle and James Young in check. Not many teams have been able to do  this so far, and in the first matchup Randle was in foul trouble early which kept him out.

Mike Anderson- "One of the things they did well here was they really attacked the glass on us."

Keeping Randle and Willie Cauley-Stein off the glass will also be another factor that Arkansas will need to overcome. In the first matchup the Hogs were outrebounded 50-32 even with Portis grabbing 10 himself. Also without some consistent outside shooting from the guards, this Arkansas team will have a tough time. Wade, Haydar, Bell and Madden must be willing to knock down the open shot and make the extra pass when Kentucky rotates.

An important aspect for Arkansas in the first meeting with Kentucky was the ability to force turnovers. Kentucky committed 17 while Arkansas lost the ball only six times. That afforded the Razorbacks 13 more shots throughout the game than the Wildcats, which was enough for Arkansas to stay in the game. If the Hogs shot as well that night as they have been lately, Arkansas would have won easily in overtime. The Hogs need to force turnovers and make shots at the rate they've been shooting since the Vanderbilt game.

Also in the first game, the officials called the game extremely tightly, with 60 total fouls committed. That played to Arkansas' advantage because Cauley-Stein and Aaron Harrison stayed in foul trouble, and Arkansas shot a higher percentage from the free throw line than Kentucky did. It helped offset the Wildcats' advantage taking shots from the floor. Whether the officials let the two teams play or if they call every ticky tack little thing will have a big impact on the game.

Will the most important factor be whether Mike Anderson goes with or without a tie? At this point this Arkansas Basketball team is willing to find any advantage it can find, be it superstitution or improved play on the court. Beating Kentucky would be a huge step and put them in position to play for something meaningful in the post season. That in itself would mean a tremendous amount in a current era where being a fan of the Arkansas Razorbacks has meant watching other teams in the postseason.