Getting To Know Rory Segrest: "Definitely Is A Good Recruiter"

With the coaching on the defensive side of the ball in upheaval, here's some good news. According to his former players, Rory Segrest is a diamond in the rough.

Share All sharing options for: Getting To Know Rory Segrest: "Definitely Is A Good Recruiter"

Before losing defensive coordinator Chris Ash to Ohio State, Arkansas' defensive line coach Charlie Partridge left to become the head coach at Florida Atlantic. His unit recorded the fourth most sacks in the SEC last season (28), only four sacks behind Georgia at No. 2 (Missouri's 41 sacks were a league anomaly).

Additionally, he was known as one of the most talented recruiters on Arkansas' staff. A Fort Lauderdale, Florida native, he was key in a recent wave of south Florida talent heading all the way to tip northwest corner of Arkansas, pulling in recruits such as Alex Collins, Ke'Tyrus Marks last year and five other commits so far in the 2014 class. Losing Partridge caused a lot of fear among Razorback fans that recruiting would take a big hit if he wasn't adequately replaced.

"Stanford... nice hire," said one uninformed Razorback fan to an informed one. 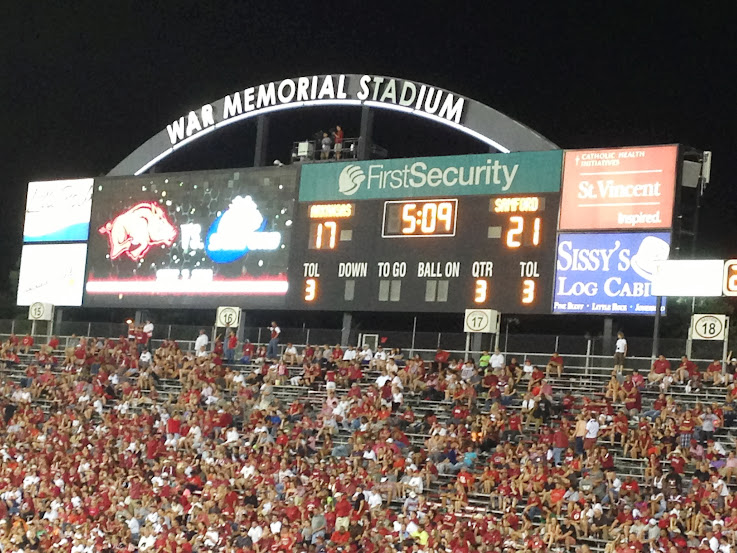 "No. Not that one. SAMford. The school that could have beat us at War Memorial*. When we should have known the season wasn't going to live up to expectations," said the informed Razorback fan.

*Author's note: This really was a possibility...

Immediately questions arose of the legitimacy of Bielema's hire. An FCS coach? Heavens!

Samford actually has a long history of successful coaches at the FBS level. The all-time leader in FBS wins, legendary Florida State coach Bobby Bowden is an alum and coached there. His son, Terry, before moving on to Auburn coached at Samford, too.

One Jimbo Fisher, coach of the current BCS National Champions FSU played his way to the FCS equivalent of the Heisman before also coaching the Bulldogs.

The Bulldogs even have a Heisman winner for a head coach, Pat Sullivan, who won the award in 1972.

We're not suggesting Segrest is the next Bowden or Fisher, but it's silly to pretend that quality coaches can't come from programs such as Samford. Clearly they can.

I feel safe in calling myself the resident Arkansas Fight Samford Afficinado. I graduated from there a few years ago and still keep up with the athletic teams, suffice it to say, probably more than most students. I attended the last game Segrest coached there, a playoff game against Jacksonville State.

Because of the size of the university, I became friends with many of the athletes, and over the past few days was able to talk with a few of them who were recruited by/played for Segrest before his move to Arkansas.

Jeremy Towns graduated this December and earned All-Conference honors while playing on Segrest's defensive line. Towns could not have exhibited more respect than he did for his former position coach.

"He demands that the defensive line play with proper technique and maximum effort. He is exceptional at developing players' fundamentals. He is the type of coach that comes into the office and stays late.

He knows football, specifically defensive line play. He studied under the guru himself, Pete Jenkins. Coach Segrest lives and breathes defensive line. He holds his coaching to a high level. Arkansas is getting an NFL-caliber coach."

Here is Towns on Segrest as a recruiter and a small example of what makes him special to his players:

I think Coach Segrest definitely is a good recruiter. I have seen him bring good talent to Samford. Guys want to sign just from talking to him on the phone.

The players will love Coach Segrest. He called me yesterday (Monday) to check up on me and make sure I still had his contact info in case I needed him. When the players see how much Coach Segrest will improve their game, they will see why his players think so highly of him.

Segrest, amid going through all of the stresses of moving a family, starting a new job and the last few weeks of recruiting, thought enough of his former player who has already graduated to call and make sure he didn't lose his contact information. That speaks volumes.

Erik Peterson was recruited by him and said Segrest remembered him even after his four-year stint away in the NFL. It's these sort of anecdotes that constantly pop up among his former players; he cares.

Peterson spoke highly of the coaches' style and the way he treated the players:

"He may not be the best X's and O's guy, but he makes up for it with motivation. His guys play hard and are aggressive.

Segrest was in charge of the special teams and was the recruiting coordinator at Samford in addition to his defensive line responsibilities. In 2013 he led a defense that won the Southern Conference, and in 2012 had three players either earn All-America or All-Conference recognition. He coached Nick Williams, a seventh round a pick of the Pittsburgh Steelers. Williams made the Steelers roster, which is not all that common for picks that late in the draft.

This was his second stint at the small school in Birmingham. During the interim, coached the Philadelphia Eagles' defensive line and special teams alongside head coach Andy Reid. Segrest's defensive lines ranked second in total sacks in 2009 and stood third in the NFL in the tackles for loss category.

Even if time coaching in college has been spent at smaller schools, he's had measurable success at every level, including being a member of the 1992 Alabama national championship squad.

With the Segrest hire Arkansas may not develop the same type of recruiting presence in Florida they had with Partridge, but, based on the success at his previous stops and what his former players/recruits have said, he is not only the kind of guy that knows how to coach, but that he is also the sort of man who can recruit other men to become uncommon.

Segrest is a class act who happens to coach; Towns told me he couldn't agree more.