Yes. That was fun. More, please.

Share All sharing options for: Arkansas' Best Games of the BCS Era

We've gone over The Worst of Times, let's relive the good. Here's our list of the top three games of the BCS era.

Put simply, this was one of the best games I've ever seen, I don't think it's hyperbolic/homerific to say so. Had Arkansas not so thoroughly underperformed during the  season, this game could be widely remembered as one of the best regular season games in recent history.

There's so much to talk about with this game. For one, I'd argue it is the quintessential Houston Nutt game.

2. So much narrative (it would be Nutt's last game; the end of an era with McFadden, Felix and Hillis all bound for the NFL; Les Miles and his AR-kansas antics leading up to the game)

4. So many cliffhanger moments

This was also perhaps the best game Nutt ever coached. Ironically, it's one of the primary reasons I did NOT vote him as the Arkansas coach of the BCS era. Stay with me here.

This game showed what the 2007 team could've been.

- We rushed for 388 yards against the No. 1 team in the country, well over 300 of which came in regulation.

- Peyton Hillis finally got involved. Somehow he only had seven TDs all season - three of them came in this game.

- We finally let McFadden pass. He had six of his 11 attempts on the season in this game, including a TD pass to Hillis. That he was a threat to throw was a big reason the rest of the offense clicked so well. Each of McFadden's three TD runs in this game came when he took a direct snap. So did Hillis' 65-yard run. It wasn't just the Wildcat; it was McFadden playing the QB role in specific sets. McFadden, Felix and Hillis as the three prongs of a triple option (or at least the appearance of an option, regardless if runs were read or called). This is what the offense should've looked like all season.  Praises to Nutt for figuring it out. Curses to Nutt for figuring out too late.

One forgotten, but important detail: It should've been LSU's ball to start the third OT. It was Arkansas' turn to decide, and instead of taking the ball last - the preferred slot by almost every football coach ever - Nutt decided to take the ball first, based on nothing more than a feeling in his gut.

Arguably, the call that won the game. Inarguably, it worked.

"Usually, on that option, if we have a choice, we say defense go back out there. I thought our offense had them a little bit more on their heels. I wanted to put the pressure on them. We thought they were getting tired a little bit, so I told Reggie (Herring) over the headset we're going to go ahead and take the ball. I know it's not normal here, but we're going to take the ball, it's a gut feeling. We're going to try to put pressure on the. Of course, he had no problem with that at all. It was good and it worked out for us."

Let's get to the tape.

:59 Oh, Freddie Fairchild. What might’ve been.

2:17 Casey Dick throwing that block. Fan-tastic. That dude owned LSU, which is awesome.

5:30 Felix getting to the corner remains one of the most spine-tingling football things that ever happened on a regular basis.

5:50 Where was thIS offense against Auburn? Tennessee? Great play design, set-up, call.

7:50 Y’all can say what you want about Gary Danielson. This is the second time in this highlight package he saw what was coming before LSU did. Oh yeah, that was 3rd and 8. Casey Dick delivers.

8:23  LSU gassed. Offense is rolling now. Really feels like we can’t be stopped. Nutt knew it, too.

That’s still my reaction every time I think of this game. It’d been a long time since Arkansas last played (and beat) Texas, 14-13, at War Memorial Stadium in Little Rock in 1991. The intervening eight-plus years gave our old SWC rivals lots of time to squawk about what would happen if/when the series resumed.

Man, we dominated those dudes, or at least it felt that way. So many sacks. 27-6 really doesn’t do it justice. The game was a defensive struggle early, going to halftime tied 3-3, but Arkansas was the better team, outgaining the Longhorns 125-46 in the first half. The only question was if being the better team would be enough.

So when Arkansas busted loose in the third quarter it’s hard to describe what it was like. It felt like some kind of catharsis, pure joy, release. Seriously, go look at the video and see how hyped our guys were for this game.

At the time it felt like Nutt was the guy who would lead us out of the Crowe/Ford-era doldrums and this Cotton Bowl was the culmination of our return. At the end of the game, the players CARRIED HIM OFF THE FIELD.

It was our first Cotton Bowl appearance since 1990 and first Cotton Bowl win since 1976. It’s easy to forget, knowing how the rest of Nutt’s tenure would go, just how beloved he once was. But the bluster, ego and bad decisions of late-era Nutt doesn’t diminish what this game meant to a beleaguered fan base. The 98-99 seasons had been fun and it was good to be a top-25 team again. But we NEEDED this win. It was symbolic.

We finally got going midway through the third quarter.

After Clint Stoerner narrowly avoided a safety to start the Hogs’ possession, he then connected with Anthony Lucas on a 47-yard, 3rd-and-12 bomb. A couple of plays later, freshman Cedric Cobbs capped the 97-yard drive when he broke free on a 30-yard TD pass-and-catch from Stoerner .

Texas answered, driving to the 1-yard line before the defense held with three straight stops and forced a field goal. NOTE: This has to be one of Arkansas’ best defensive performances of the BCS era.

From there, it was all Hogs piling up points and sacks. Arkansas drove 87 yards on seven plays on their next possession, capped by a studly 42-yard run from little-used Michael Jenkins. And the rout was on.

The Hogs defense finished the day with eight sacks (still not convinced it wasn’t actually a thousand) including a sequence of three straight – the second of which resulted in a torn ACL for Major Applewhite. Fittingly, his replacement Chris Simms was also greeted with a sack on his first snap.

Texas finished with (-27) yards rushing on 25 carries, a Cotton Bowl and UT school record for ineptitude. 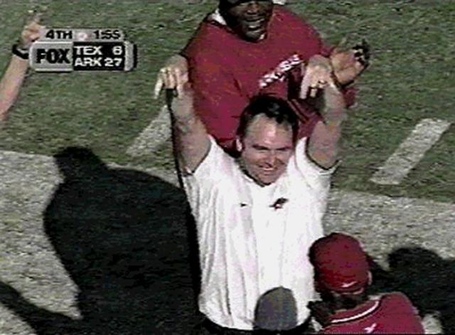 There was no way we should have won this game.

The first 3.5 quarters were brutal, ugly football. I guess that’s part of what made the last 34 seconds so sweet -- nevermind the fact that it landed the Hogs back in Atlanta for the first time since 1995.

Throughout the dreary late November day, Nick Saban’s defense flustered Arkansas, particularly through the air. Though the Hogs posted good numbers on the ground (48 carries, 245 yards) success came mostly in spurts and hadn’t amounted to any points until midway through the third quarter when fullback Mark Pierce plunged in (barely) on fourth-and-goal  from the 1-yard line.

It cut the LSU lead to 10-7, but the Tigers came right back with a seven-play, 89-yard touchdown drive, giving them a 17-7 lead that was starting to feel insurmountable.

Matt Jones had completed one pass in the first half, then another early in the third quarter. And that was it.

But defense kept the Hogs in it until Fred Talley started ripping off big runs midway through the fourth quarter. First an 11-yard run on a option pitch. Then a 12-yarder off left tackle. And finally a 56-yard jaunt through the middle of an LSU defense that was beginning to show signs of fatigue.

If only the Hogs could get the ball back…

But LSU was marching, slowly grinding the clock down to almost nothing. Thirteen tortuous plays that resulted in a field goal with 40 seconds left.

At this point people – not a lot, but some – began filing for the exits. Their thinking? Matt Jones was 2 for 13 on the day and we had used up all three timeouts on that last LSU drive.

By the time Jones and the offense got on the field after the kickoff there were 34 seconds left and the Hogs were 81 yards away from the end zone.

"I couldn't believe Richard Smith got behind that guy. Our play wasn't designed to go to Richard, but they let him get behind them. If I could have thrown the ball about 10 yards further we would have scored on that play.''

50 yards down to the 31. Holy crap. We had a chance to win this game. It seemed to come out of nowhere. Our offense showed up. War Memorial (not to mention Richard Smith) was on the verge of a shared conniption. We didn’t stop to spike it; instead Jones’ pass, intended for Carlos Ousley, went incomplete, stopping the clock with 17 seconds remaining.

A first-person account, if you’ll allow, of what followed:

From where I was sitting that afternoon, the Hogs were directly in front of me when the drive began, moving left to right. This is relevant, because I was in the worst possible spot to see what was happening in the southwest corner of the end zone.

Here’s what I could see…

I saw Matt Jones receive the snap and start to drift left. I saw him stop, move back to the right, pivot and launch an arcing prayer toward a scrum in the back of the end zone.

"There’s no way," I said out loud to nobody at all as the ball floated.

Then the place exploded.

In my mind, it plays out like a car crash. The next 10 seconds moved like minutes. All around me people were screaming, hugging, high-fiving, jumping up and down. I think the buddy I was watching with was trying to but me in a celebratory headlock.

But I couldn’t see what happened and I wasn’t about to get sucked in to letting myself believe prematurely. There was just no way we caught that pass. And if we did, we couldn’t have been in bounds. Not with control of the ball. No way.

I never found one. What I finally found was Matt Jones, alone around the 35-yard line pointing to the sky, about to be bumrushed by Fred Talley.

That was good enough for me, and I gave in to celebration.

I never doubted David Carlton would convert the PAT, even after 15 yards were marked off for excessive celebration. I didn’t find out until later it was Decori Birmingham who came down with the touchdown catch. And I didn’t care that we would be completely overmatched in the SEC Championship game against Georgia.

There was no way we should have won that game in the first place.

Brent Holloway is a lifelong Hog fan originally from Smackover, AR, home of Clyde "the Smackover Kid" Scott, Jonathan "Pookie" Modica, and about 2,000 other Buckaroos with a flair for colorful nicknames. Remember the bad times with him on Twitter, @thebholloway.