The Arkansas Razorbacks Are Having Some Serious Wide Receiver Issues

The Hogs' have lost some receivers in fall camp. Who will be the new players to step up?

Share All sharing options for: The Arkansas Razorbacks Are Having Some Serious Wide Receiver Issues

Arkansas released a two-deep depth chart after spring practice and it included six players at receiver. On the first string was three seniors: Julian Horton, Javontee Herndon, and Demetrius Wilson. The second team was made up of a trio of sophomores: Mekale McKay, Keon Hatcher, and D'Arthur Cowan.

The pieces snugly fit together. There was nothing to worry about.

But after just two and a half weeks of fall camp, McKay transferred, Wilson tore his ACL, and Cowan is out for approximately 6-8 weeks after suffering a foot injury.

It seemed inconceivable a couple of years ago when Bobby Petrino was signing all sorts of receivers that that Hogs would have any sort of receiver trouble anytime soon, but here we are. There have been several wideouts Arkansas signed since 2010 that didn't stay in Fayetteville very long. Marquel Wade, Mardrecus Humphrey and Kane Whitehurst left after getting into troubles with the law. Quinta Funderburk and Keante Minor just never really found a fit once they got here. And, of course, the Hogs missed on high profile receiver recruits like Dorial Green-Beckham and Marcus Lucas, who are now both starting at Missouri.

Those personnel miscues have come back to bite Arkansas. Now that a few receivers have gone down in camp, the Hogs are basically forced to look for help from their freshmen.

So who are these freshmen? And is there reason to be optimistic? Here's a rundown of the other receivers on the roster:

Drew Morgan - Morgan has been getting a lot of reps with both the ones and the twos. It looks like the freshman from Greenwood will see the field quite a bit early on. Bielema after the most recent scrimmage: "Drew Morgan was probably our leading receiver out there tonight. Did a tremendous job catching the football" After the first scrimmage Bielema referenced Morgan working as a slot receiver.

Melvinson Hartfield (best name on the team) - It took a little time for Hartfield to get through the Clearinghouse, but he was able to start practicing about a week ago and appears to have made quite an impression in a short amount of time. Bielema after last Saturday's scrimmage: "Melvinson Hartfield had a touchdown catch (a 65 yard touchdown), has tremendous speed. He's got a lot of ability."

Wide Receiver coach Michael Smith has also been complimentary of both freshmen, "I think they are further along than many freshmen receivers around the country right now. We've got two more weeks to try and get them better and prepared for this first game."

Hunter Henry - Yes, Henry's a tight end, but don't be surprised to see the team work in plenty of multi-tight end sets and use Henry as a pass-catching tight end. Bielema after the first scrimmage: Hunter Henry will definitely play for us at tight end. I bragged a lot on him on Saturday and the film reinforced that even more so." Henry tied for second on the team with four receptions in the first scrimmage.

It appears the Razorbacks are confident enough in these freshmen to rely on them during the season, which will be vital to keep the passing game effective. The more opponents have to respect Arkansas' passing ability, the easier it will be for Jonathan Williams and Alex Collins to find running lanes.

No one is expecting Arkansas' passing game to resemble the one we've seen since 2008, but this team shouldn't be as purely run-oriented as people have generalized Bielema's teams to be.

And if nothing else, he can get rid of receivers altogether and roll out the Barge formation he used sparingly at Wisconsin (7offensive linemen, 2 tight ends, and two tailbacks). 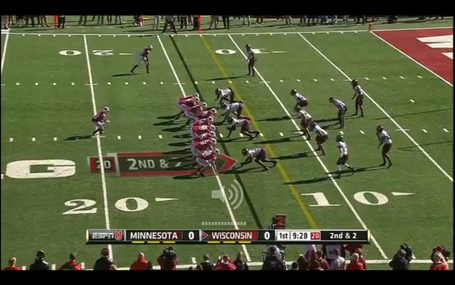 The Bucky's 5th Quarter guys seemed to enjoy it.

But, seriously, the Hogs still need to, and can throw the ball a little.

Other receivers on the roster include Anthony Antwine, Eric Hawkins, Chris Saunders, and the team recently announced walk on quarterback Brian Buehner was being moved to receiver.