Come air your grievances, but before you do, please heed a few ground rules

Ok. I think it's time we all talked about Bret Bielema. About our hopes and fears and Xs and Os and recruiting and Twitter and press-conference trolling and B1G and SEC and smashmouth and HUNH.

Although it's pretty clear the Arkansas roster is in shambles, and it's too early to pass rational judgment on Bielema's long-term prospects for success, three quarters of the way through his first season, it's not too early to examine what we've seen so far.

But if we're going to do this civilly, there are a few basic tenets we must all first agree to:

Listen, I'm in (what I believe to be) the minority that would've been fine with hiring Gus Malzahn last year. It would've been a riskier move than Bielema, but I've always been a fan of Gus. He's a bright, innovative guy, and I'm not surprised that he's doing well at Auburn.

At Auburn, as in, not at Arkansas. Dwelling on what might've happened last December or what he might've done with Arkansas' roster is a worthless expenditure of psychic energy. Let it go.

If Bielema fails, the people responsible for his hiring will be held accountable. Let's just hope that doesn't happen.

I mean, that is what we're all hoping for, right? Surely there aren't Razorback fans among us getting some sick thrill from seeing Bielema struggle while Malzahn succeeds. Surely not.

2. There are lots of ways to win at football

The spread offense is not the only way to make a team relevant. Pro-style offenses are not the only kind that win championships.

These dogmatic arguments that are rampant in the Arkansas fanbase right now are tiresome and silly.

The teams that win the most football games are the ones with a) the best athletes, b) deployed in the smartest fashion by their coaches, c) consistently executing basic fundamentals such as blocking, tackling, ball security, gap integrity, etc.

Auburn, Ole Miss and others have achieved quick success using the spread. Mississippi State and Kentucky have not.

Stanford and Wisconsin (even under new-coach and former spread devotee Gary Anderson) are winning an awful lot of games with a more meat-and-potatoes approach. Right now, Arkansas is not. And yes, Stanford would also win a lot of games in the SEC.

Now, if you wanted to argue that Arkansas must resort to some kind of gimmick because...

3. Recruiting will always be a challenge at Arkansas

...well, that's a different argument. And you might be right.

Not that the spread is a gimmick. Not saying that.

But those who espouse the spread often call it "the great equalizer," meaning that it allows teams with lesser talent to better compete with superior teams. Maybe, but when teams quarterbacked by Johnny Manziel and Robert Griffin III are held up as examples of lesser talent, I've got a problem with the premise.

What we're going to find out during the Bielema experience is whether or not a team with the inherent challenges facing Arkansas can win consistently in the nation's toughest conference by playing old-fashioned football. Right now, the simple fact is, we don't know.

What we do know is that Arkansas will almost certainly lag behind the rest of the conference when it comes to recruiting rankings. So please, let's not hold that up as evidence of Bielema's impending failure. 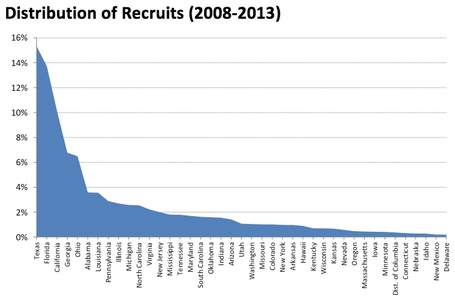 Maybe there's a coach out there who could overcome Arkansas' victimization by geography. I'll believe it when I see it.

So, with a 600-word preamble, we'll keep the rest of this to-the-point.

Can Bielema be successful?

In theory, yes. Of course he can. Winning the conference (or more) will always require the right set of circumstances, starting with a Mallet or McFadden type of talent, but the Hogs can be a consistent winner doing what Bielema wants to do.

Perhaps paradoxically, we saw how in a 35-17 loss to Auburn.

For long stretches, Arkansas was able to do exactly what it wanted: march the ball methodically with long possessions and limit the opponent's opportunities. And if you squinted just right, you could see how it might work. Arkansas had four drives of 10 plays or more, including two that lasted a combined 14 minutes and 34 seconds (!).

In theory, those kinds of prolonged drives keep an opposing offense out of sync, force three-and-outs, and eventually lead to turnovers and a general snowball-rolling-slowly-downhill effect.

It exists in its current form and is unable to produce these desired results.

Still, at a macro level, yes. Last week we saw seeds of growth that might eventually blossom under Bielema.

But at a micro level, that's where reasonable doubts reside.

Remember those long, glorious drives we just talked about. Only two of them resulted in points - 10, total. The most egregious was a 17-play, 73-yarder that died on the 1-yard line after back-to-back runs into the heart of the line of scrimmage on third and fourth downs.

I get that this is the identity Bielema wants to build. It is a noble endeavor. The identity I'd prefer, however, is of a team that scores touchdowns and doesn't waste 8-and-a-half-minute drives because we were hard-headed on the goal line.

It should be mentioned that offensive coordinator Jim Chaney is tasked with calling plays and that he has a strong resume and that we don't know how those plays were selected.

What we do know is that we've seen enough of Arkansas in short-yardage situations this season to know that simply lining up and blowing people off the ball is not what we do best. Those responsible for playcalling should've known the same (to their credit, they seemed to learn in the second half when the motion of Javontee Herndon into the backfield gave the Auburn defense pause enough to allow Kiero Small to blast his way into the end zone).

There are other calls throughout the season we could take justifiable issue with - ill-fated fake punts, onside kicks, etc. And we heard when Bielema was hired that in-game management was not his strong suit.

If those give you reason to doubt we hired the right guy, OK. I get that. It's nine games into the season and we're winless in the SEC and things look pretty bleak in general. Angst is gonna happen.

3-6 records should not be forcefully defended, so I won't argue on behalf the job Bielema has done thus far. I also won't argue with those in violation of tenets 1, 2 or 3, but that's for a different reason entirely.

Brent Holloway is an escaped journalist, but will consider returning to the industry for hundreds of thousands of dollars and a position that doesn't require Waffle Hours hours. Engage with him on topics other than Gus Malzahn on Twitter, @thebholloway.