So, the next month of Arkansas football is shaping up to be just awesome. It's like we failed our driver's test last week in Piscataway, and now we're about to get thrown into NASCAR qualifying.

Could an upset happen? Sure.

Hey, how many Aggies does it take to tackle an opposing running back? Good question, but it's still early in the season. It'll happen eventually.

There, that felt good. Let's do more of that.

Because talk all you want about increased geographical footprint and the television revenue that comes with it, the best thing about Texas A&M joining the SEC isn't the renewal of a second-tier rivalry. It's the comedy.

So let's tell some Aggie jokes. There are million of 'em, so share your favorites. Maybe even make up some new ones. It's easy. I'll start.

Two Aggies walk into a bar. One is dressed up like a sailor or something. 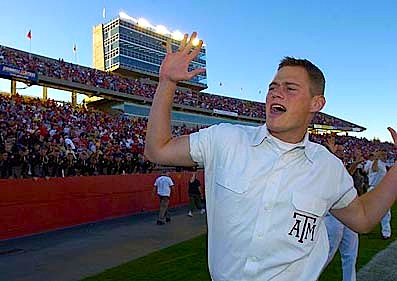 The other guy is wearing overalls with patches on the ass. 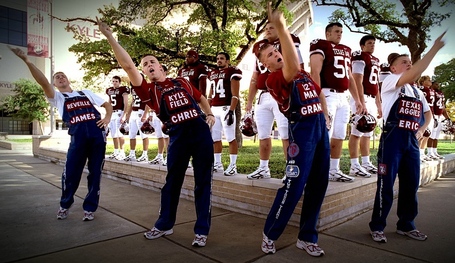 It was hilarious! Really, you guys should've seen 'em.

Also: There were no women in the bar, because who wants women at their college bar? Amirite, Aggies?!?!?!

Two Aggies walk into a bar. The third one ducks.

Two Aggie fans were walking through the woods when they came upon a set of tracks. The first Aggie fan said, "Those are deer tracks."

The second fan said, "No, they're too big to be deer tracks. They must be elk tracks."

As the debate continued, they got hit by a train.

An Aggie was down on his luck so he decided to go out and kidnap a child to get the ransom. He went to the park and snuck up on one of the kids. He grabbed him and took him behind a tree. He told the kid that he was kidnapped and pinned a note on the kid's shirt that read:

He told the child to make sure his parents saw the note and sent the child home.

The next day the Aggie went to the tree to find a sack. He looked inside to find the money he had asked for and a note that read:

"How could one Aggie do this to another Aggie???"

Once upon a time the Aggies had this great player who couldn't pass his math class. Since he was failing his class, he would not be allowed to play in any more games.

The coach asked the player why he couldn't pass his tests, and the player said he liked to perform under pressure, and that it would help if he could take the test in the football stadium in front of a bunch of fans.

So the next day, 50,000 Aggie football fans filed into the stadium to help cheer the star football player on. He sat at the 50-yard line and opened the test up as everyone cheered his name.

An emergency dispatcher for the College Station 9-1-1 received a call one day. She answered:

"Emergency Services, what is the nature of your emergency?"

"Man, this is Jim Bob and me and old man Jack was out huntin' some gooses down to old man Fisher's pond and old man Jack grab his chess and jist now he drop his gun and he go down. He not moving an inch, I think he dead, What I do man?"

"Well, it sounds as if your friend has had a heart attack and may have potentially died. I need you to first make sure he is dead, help is on the way.

Suddenly, three shots rang out over the phone, followed by Jim Bob asking ..."Ok. What next?"

Brent Holloway is an escaped journalist, but will consider returning to the industry for hundreds of thousands of dollars and a position that doesn't require Waffle Hours hours. Watch the ship go down with him every Saturday on Twitter, @thebholloway.