Football is back and the SEC image took a hit.

Share All sharing options for: SEC POWER Rankings Week 1: Sorting Through The Rubble

No way around it. This was not a good weekend for the SEC as a whole, going 6-6 outside of the conference. While there were few ups, there were more downs and it is ever-present that there is a clear divide between the top teams in the conference and everybody else.

The Tide did what it does every dang time, absolutely destroyed all obstacles. Never thought I'd say this, but good for Lane Kiffin, who trolled harder than anyone else during Week 1.

Kirby Smart earned his first victory as a college coach, and freshman quarterback Jason Eason also showed he can gain plenty of yards via pass interference.

First half Ole Miss ranks No. 2 on this list, pulling just short of Alabama, but then came the second half. With the talent available, it's hard to move the Rebels down too much further.

Props to the Tiger athletic department for scheduling basically a road game against a strong non-conference opponent. The downside is if you're not Alabama you run the risk of actually losing these types of games.

Well would you look at this? Kevin Sumlin is trying to keep his job!

What we learned: the defense was able to hold its own against one of the most potent attacks in the country. What we knew and saw again: the Auburn offense isn't far from catastrophe at any moment.

Butch Jones' team showed up just in the nick of time and the Vols benefited from some questionable play-calling from Appalachian State. It goes to show you that a coach at the SEC level has reached this level for a reason.

The Gators beat UMass, which hasn't enjoyed significant athletic success on the biggest stage since the days of Marcus Camby.

Sure... "a win is a win," but at in Year 4 of the Bielema Experiment, Louisiana Tech shouldn't push the Hogs around on the line.

Enjoy the top of the mountain, Gamecock fans. 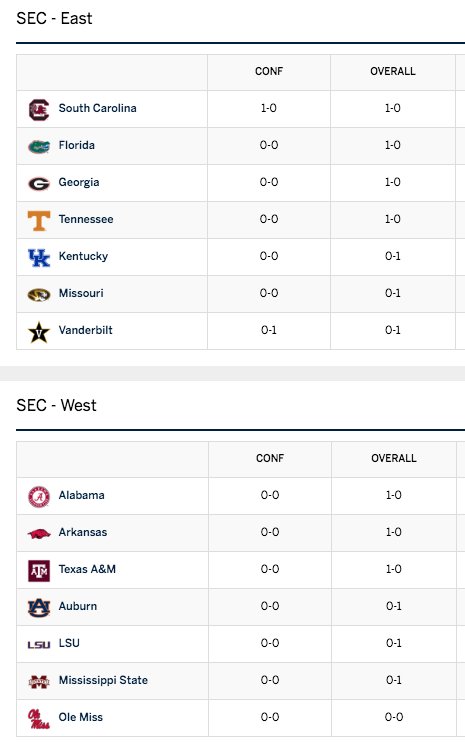 The Tigers put up the yards but very few points, falling to West Virginia.

At some point, coach Derek Mason has to get his team to finish some games. This looked to be the year for change, but we saw more of the same.

Southern Mississippi has five wins over the last three seasons. This was the Eagles' second-largest margin of victory. Mark Stoops' days in Lexington appear to be numbered.

They should quickly crawl out of the doghouse of the SEC POWER Rankings, but dropping your opening game at home to South Alabama equals a fall to the basement.