Spring football brings out more questions than answers. Here are a few of the areas that are pivotal in taking that next leap forward.

Beginning any new venture can be pretty rocky. Arkansas under Bret Bielema is finally rolling into a new phase. There have been many roadblocks along the way. Multiple injuries, transfers, and coordinator changes filled year 1 and 2. The end of the 2014 season and the stampeding of Texas left the program on the upward trend. Now the big question we are all pondering is what areas will this team need to focus on in order to maintain that momentum and push the 2015 Hogs over the top?

Phase I consisted of just trying to rebuild everything. This spring all the parts have been put in place. The run game, PA passing game, defensive philosophy, and finding the right players that fit his style all seem to be pretty close to where he wants them. The next step in the process involves the ability to replicate that success game to game, week to week.

Related: Why Robb Smith's new contract is worth every penny. 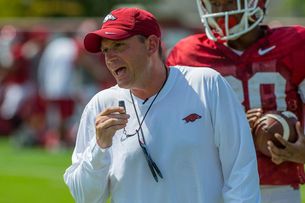 Press the hip, wrap and roll, sweep the ankle.....all fundamentals that have been instilled into the Arkansas defense. Robb Smith has transformed a bend and mostly break group into a stifling, swarming top-level SEC defense.

Phase II: What is at the top of the list to take that next step?

Is it quarterback, wide receivers, dbs, linebackers, dline or oline? Maybe even the kicking game? What are the most important aspects to carry that momentum forward from last season with no drop off?

Replicating the success on defense, starting up front with the defensive line is, in my opinion, the most important area and where I will start.

The first two seasons for Bielema on the defensive line included some talented players like Chris Smith, Darius Philon, Trey Flowers, and Byran Jones along with a wealth of young guys. Those freshmen and sophomores are now put in position to be in the rotation on a regular basis.

The teams that had the most success up front against Arkansas in 2014 got the ball out quickly on 3 step drops. Georgia and Auburn had an obvious gameplan to use quick slants, digs, and inside breaking routes in combination with a quick passing game to neutralize the Arkansas pass rush.

Here are a couple of the schemes and line games that Bielema, Smith and Seagrest used on the defensive line last season against teams who attempted to drop back and throw. Maintaining this inside pressure will be a big part of the success next season.

Taiwan Johnson had 3.5 of his 4.5  sacks early in the season from this Tackle Twist concept.

Variations of this are used everywhere as a man blocking killer. You can see the guard follow Johnson inside and pick the center next to him allowing Philon a free run by dipping his shoulder. The quickness shown by these DTs, is just too much for an over matched offensive line like Nichols. And as I will show later, even the more talented SEC caliber interior lineman struggled in the same situations.

Another scheme used by the big monsters in the trenches for Bielema is the Tackle, End Exchange.

Here you will see Trey Flowers at DE using the same technique as the tackle twist above but from a 5 technique. His first step is forward which put the tackle on his heels expecting a speed rush to the outside. From there his ability to change direction and the use of Taiwan Johnson's quickness in the space from center to guard is tough to handle even for top level interior lineman.

In this example, Mississippi State even sent the back to chip and Flowers was still able to get pressure on the QB resulting in a poor throw and INT. Repeating this scheme against the better passing teams and putting pressure on the QB will be key in 2015.

Next example of the interior dline production is the same call as the first where Johnson and Philon collapsed the pocket. Bijhon Jackson is in the game on this one and it shows the potential match up problem that he will be next season.

One gap philosophy, that is what was used with great success last season. Putting these guys in position to attack that single gap without hesitation led to some big plays.

How will the new guys step in and contribute? Philon was a slasher, who used leverage and quickness to get to his assigned gap in a hurry and make plays behind the line of scrimmage. Will Ledbetter, Hodge, Beanum, Wise, or Winston be able to excel in the same scheme? I think so, and one or two will seperate themselves from the rest as the first few games pass. Also lets not forget some of the guys like Mitchell Loewen and Brandon Lewis who will be out in the spring and have the potential to jump into one of those spots.

On this 3rd and long situation in the bowl game, Arkansas puts 3 defensive ends on the field with Philon and runs the same tackle twist. Deatrich Wise is the nose with Flowers and Loewen at the end spots. Its almost impossible for an average to less than average offensive line to be able to handle the quickness in this scheme. Hope to see more of this personnel with Taiwan Johnson in Philon's place on those passing downs this year.

Replacing the big two of Flowers and Philon will be an effort by committee in 2015. Deatrich Wise has shown some flashes of that same skill set as a rush end, but just needs to see more consistency. Bijhon Jackson will make a huge leap next season. The defensive tackle position seems solid right now, it is more of a concern on the outside finding a guy that can play contain, run these stunts with precision and has the threat to just blow by a tackle in speed rush. Jamichael Winston has all the measurables to fill that role along with Jeremiah Ledbetter who has been seeing some reps at end as well.

Depth at the defensive line position is at an all time high right now and this coaching staff will be pushing to find someone who can seperate themselves. (Throw in freshmen Hjalte Froholdt and Daytrieon Dean in practice reps)

These stunts on the defensive line are all a part of the well thought out plan. All the guys recruited by Smith and Bielema fit that style and are athletic enough and have the lateral agility needed. In Phase II the constant theme repeated by the coaching staff will be of maintaining that level of production and consistency that we witnessed late in 2014.

UP NEXT: Phase II of the Wide Receivers, developing consistency.