The Weekend That Will Be: Conference Championship Week

It's the last Saturday with meaningful games all day for another nine months. Enjoy even the bad ones.

Share All sharing options for: The Weekend That Will Be: Conference Championship Week

The Playoff picture is becoming more and more clear and will be decided in full by Sunday night. That said, there aren't too many more meaningful games in terms of who gets out and in, mostly for positioning. There are plenty of other games that will decide bowl pecking order this weekend, and Arkansas should know which third tier bowl it'll play in by the end of the week.

This is the one game that I can say in full confidence that the winner will be in the CFP. Iowa tries to continue its undefeated streak against Michigan State, which is one of the two or three hottest teams in the country. Spartan quarterback Connor Cook is healthy and good to go. His counterpart, C.J. Bethard, plays the game very similarly out of a pro-style system. Neither turn the ball over (only four and three interceptions, respecively, with 300+ attempts. I like the experience of having been in games of this magnitude and a familiarity of the B1G Championship Game weekend to be a difference-maker for Sparty.

The Crimson Tide looked somewhat vulnerable last week on The Plains before Derrick Henry let free on over 40 rushing attempts for 271 yards. That sort of load -- and a strong Gator defense -- will have an effect on his production this week, meaning Alabama quarterback Jake Coker will have to step up his game. The only way Florida finds its way to victory is by way of turnovers and defensive points, as quarterback Treon Harris does not have the skill to defeat Alabama. "18" is a huge number to cover for any team in a championship game so I have to go with the UF defense and hope for the best.

I would be shorting all of you if we didn't remember the last time Florida played Alabama in the SECCG:

Somehow, after a tumultuous season, the Trojans are back in the Pac-12 Championship Game, and Stanford is riding high after defeating Notre Dame last week. The Cardinal are susceptible to the big play through the air if USC's Cody Kessler can take advantage of it will be the question. I like Stanford, led by Christian McCaffery, to win more easily than last week.

The last time the Tar Heels played in Bank of America Stadium in Charlotte was the first game of the season, the Heels' only loss all year. That came at the hands of a terrible South Carolina team because UNC quarterback Marquise Williams couldn't not throw to Gamecock defenders. The weekend, he'll lead his team against the best quarterback in the country, Deshaun Watson. Watson will have a big day and UNC will not pose a threat as Clemson tries for its first national title since 1981. 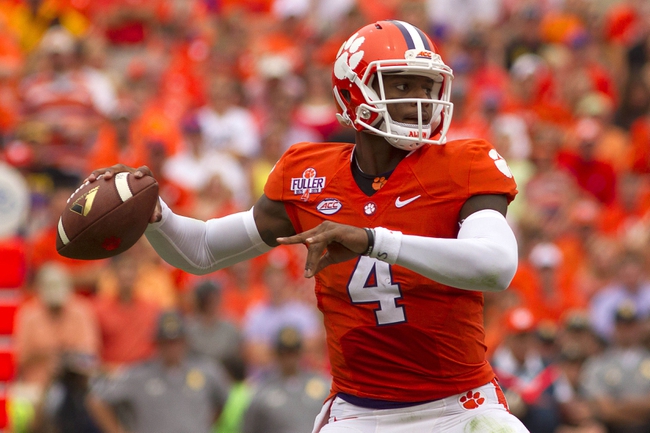 Both schools are winners so far this week because they have found a way to hang on to their coveted head coaches for what appears to be at least another season. Houston will be tested because of the players it has lost due to injuries while the Owls continue to dominate on defense. Take the Owls and the points in what will be different from all the other conference championships because it's a home game for the first-place team.