Share All sharing options for: Travis Swanson Drafted by the Detroit Lions

Congratulations! Travis Swanson was selected by the Detroit Lions in the 3rd round with the 76th pick. Here's what we wrote about Swanson in our NFL Draft profile from earlier in the week:

Travis Swanson (@Tswan64) signed with Arkansas in 2009 as a 3* recruit and after redshirting his freshman season, went on to start all 50 games of his college career and was only the 11th two time captain in Arkansas history.

Swanson's first two seasons at Arkansas resulted in a record of 21-5 where his team put up impressive offensive numbers . The next two seasons he lost his head coach and the Razorbacks went 7-17 over Swanson's last two seasons, but he was still considered one of the best players and leaders on the team.. He showed the ability to lead through ups and downs and coaching changes which is even more common in the NFL. His consistency in the middle of the offensive line was counted on during the weekly grind of the SEC schedule.

Swanson played under contrasting styles in the Bobby Petrino offense and Bret Bielema offense. This vast experience in those schemes gives him the flexibility to adapt to many NFL teams style. He was able to show improvement in run blocking during his Senior season in 2013 under Bielema where his team produced 5.3 yards per attempt. Excels in zone-blocking plays where he is able to use quickness and athleticism to out leverage defenders. 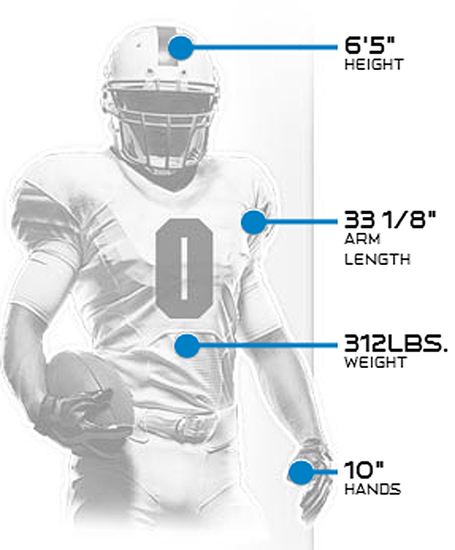 Strengths: Quickness and mobility. He was asked to do a lot of pin and pull technique in his Senior season and is a good second level blocker. Football IQ. Durability. Leadership on and off the field.

Swanson on what he needs to improve: "Probably something I need to get better at is just core strength," Swanson said. "That's the biggest thing I tried to take into account this offseason."

On who he thinks his play compares to: "Alex Mack, I've always watched him whenever I get the chance," "I love the way he plays and I think I've patterned him. I don't want to say I'm him exactly, but I try to be."

Swanson is the type of player that has been able to show consistency and constant improvement from day 1. In the NFL he could be a solid backup for a team that is already set at the Center position. Or he could be a guy that is expected to compete for starting time immediately in situations where the clear #1 Center is not determined.