Share All sharing options for: Chris Smith Drafted by the Jacksonville Jaguars

Here's what we wrote about Chris Smith in our NFL Draft profile from earlier in the week:

Chris Smith signed with the Razorbacks as a 3* defender out of North Carolina, but became one of the best defensive players at Arkansas over the last few years.

He emerged as a dominant pass rusher and team leader during a tough season at Arkansas in 2012. He earned All SEC honorable mention with 52 tackles and 9.5 sacks. (5th best in the NCAA) His return in 2013 as a team captain was followed up with 8.5 sacks and 11.5 tackles for loss. His emergence made him a target for double teams, and many times offenses would call run plays away from his side of the field. A schedule that included Texas A&M, Alabama, Auburn, and LSU matched Smith against top level offensive lineman on a weekly basis.

After the 2013 season Smith was selected as second-team All-SEC by the league’s coaches.

2014 NFL Draft Combine: Ran an impressive 40 Yd dash time at the combine of 4.71. Also was a top draft performer on the Bench Press with 28 reps and a vertical jump of 37 inches. During his Pro Day showed quickness in both the Dline and OLB drills.

Team leader, plays every down with same amount of energy, does not take plays off. Very strong for his size, and has impressive speed in pass rush situations.

Obviously his size at 6'1 is where the question marks occur in the minds of NFL GMs. Will he be able to get to the quarterback consistently against much taller Tackles with longer reach? He was able to produce as well as his counter parts (Clowney,Sam) against top level SEC Tackles like Jake Matthews, Greg Robinson, and Cyrus Kouandjio.

Smith does not possess an extensive amount of pass rush moves. He relies heavily on a straight bull rush and his speed around the edge. At the NFL level his success will depend upon developing some new counter moves to keep Olineman from getting their hands on him. 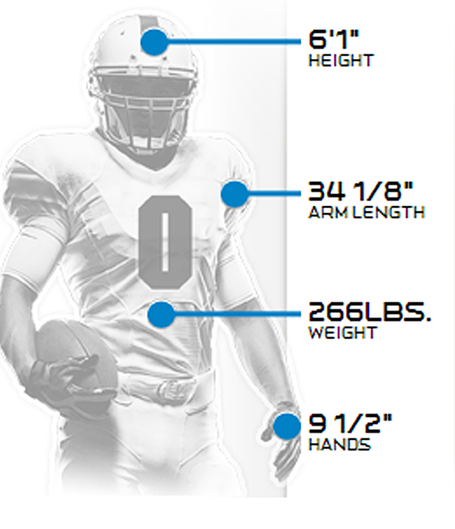 Most of the draft evaluators have Chris Smith being either a weakside DE in a 4-3 or a 3-4 OLB who plays a majority of snaps as a pass rusher.

"Smith possesses the combination of burst upfield and underrated strength at the point of attack to help a franchise, but size limitations could mean journeyman status in the NFL." --Rob Rang (1/22/14)

"Linebacker drills were another area where he excelled. Even at 266 pounds, Smith was quick and fluid moving in reverse while showing a burst of straight line speed. Projected by most scouts as a 3-4 outside linebacker, Smith proved to have the goods. DraftInsider.net

"A weakside pass rusher who could most ideally project to the rush linebacker position in the pros for a 3-4 front, Smith graded more highly as a junior than he did as a senior, yet possesses the tools to earn a starting job in the pros in multiple schemes. Versatility is a plus."

Back to back sacks against Southern Miss

Sack of Nick Marshall in a game where he was asked to defend the Zone Read more than pass rush.

Chris Smith finished his career with the 4th most career sacks in Arkansas Razorback history. His skill set would be comparable to Von Miller of the Denver Broncos, Aldon Smith of the 49ers, or Brian Orakpo of the Redskins. Would be a good fit for a team looking for a hard worker who can be versatile as a 3-4 linebacker/ pass rusher.