We're doing a liveblog here and this is also an open thread, so feel free to provide your own commentary in the comments.

3:12: That'll do it. Final score is irrelevant. Quick stats: 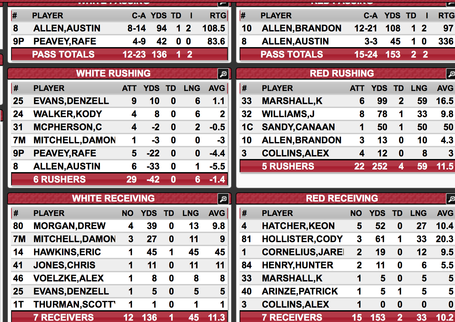 3:08: Austin Allen with another beauty to the same part of the field. This time to Cody Hollister for the 33-yard touchdown reception in the left corner of the end zone. MAKE AUSTIN THROW TO THE LEFT

2:50: Kody Walker is supposed to be the 1st team fullback but he's playing with the White Team. How much different is the 1st team running game if Walker is back there helping block?

2:45: Red Team offense looking competent all of a sudden. Korliss Marshall with the scoring run. Brandon Allen attempting Jedi mind tricks, "The first half is not the half you remember"

2:40: Brandon Allen is finally on the board. After Williams' big run, completes some nice passes to Cody Hollister, Keon Hatcher, and a short touchdown pass to Patrick Arinze. Brings Allen's passer rating all the way up to 77.5.

2:37: Hunter Henry is alive! He gets his first catch of the day. Great way to impress Will Gragg with all these tight end catches.

2:33: Good chunk of people left at halftime. Guess they'd seen enough. White Team offense couldn't do anything to start the half. Ones back out there with the ball. Surprised Arkansas hasn't done any sort of recognition of former players or anything during the game. It's usually a spring game staple.

2:17: It's halftime. Brandon Allen's stats aren't pretty. 25.1 passer rating and 2 interceptions. Austin Allen and Rafe Peavey are combined 9-13 for 107 yards and combined passer rating of 278.8. And they're going against the 1s.

2:07: Prettiest pass of the game is Austin Allen hitting Eric Hawkins in stride for a 45-yard touchdown pass

2:00: Next play, Austin Allen stripped by Deatrich Wise. Darius Philon recoveres and takes it back to the house. Three touchdowns in three plays for the Red Team.

1:57: And there's Korliss for a 59 yard TD run. Dudes named Korliss continue to do good things at Arkansas. (or Corliss).

And Austin Allen gave the Red Team 7 more with a pick 6 to Rohan Gaines.

1:53: Okay, they estimated the attendance at 30,000. Doesn't seem unreasonable. They've seen the White Team complete 100% of their passes so far. But they've also been sacked 5 times.

1:50: Alex Collins with his first big run of the day. But it's called back for holding. Figures. So far the Red Team's only good drive came when Marshall and Williams busted open big runs. Passing game doing nothing. Brandon Allen's rating is 25.1 as of this moment.

1:44: Sam Irwin-Hill credited with an 85-yard punt. It was a great punt but Duwop couldn't handle it. He bounced it into the end zone. Don't know if it should've been called a safety or a touchback but they called it a touchback. That's good. Keep Duwop happy.

1:34: Peavey in! And first two passes complete. I'm sure no one will compare his first passes to Allen's.

1: 31: First quarter over. Red Team (1s): 7. White Team (the world) 3. Duwop has caught a couple of passes already. That's good. It might be good to feed him. They need to keep him happy. He's also catching punts for the White Team.

1:29: Just noticed Arkansas has only 5 players listed on the roster as linebackers. 5. 5! Tiquention Coleman is listed as a safety and he plays a quasi-linebacker position, but still, 5!

1:24: We have our first touchdown after a pair of big runs from Jonathan Williams. He carried the defender with him for a long way on the first one.

1:21: Korliss Marshall picks up six on his first carry and busts through for 19 plus a face mask penalty on the next play. I LOVE HIM SO MUCH

1:18: The ones on offense have yet to do much against the world. But, to be fair, this is the world we're talking about.

1:12: 1st team defense hold the 2nd team offense to a field goal. So that went well.

1:08: And Brandon Allen's first pass is picked off. I'm sure nobody will notice. DeAndre Coley picked it off. Austin Allen starting at quarterback for the white team.

1:06: Jonathan Williams, Alex Collins, and Korliss Marshall are all on the Red Team, which is supposed to be the first team. Thought at least one of them would be on the White Team. Interesting.

1:02: Crowd has filled in nicely on the west side. East side is pretty scattered.

12:57: Have received word that JoJo Robinson is here. So that's good!

12:50: Settled in here at the stadium. Doesn't look like nearly as many fans here today as there were last year. The announced crowd will still probably be in the neighborhood of 200,000 or so.