Reasons to Hate: A Bye Week

The team may take a Saturday off, but to Hate, every week is game week.

Share All sharing options for: Reasons to Hate: A Bye Week

The Bye Week.  All that pent up frustration from Saturday's game with little to no outlet.  You start thinking, I always hate Alabama... maybe I can hate Alabama this week AND next week.  In the word's of Lee Corso, "Not so fast, my friend".  It's the Bye Week, and that means you get to hate anybody and everybody.  Some people would breathe a sigh of relief and say "hey at least we can't extend the streak any further" 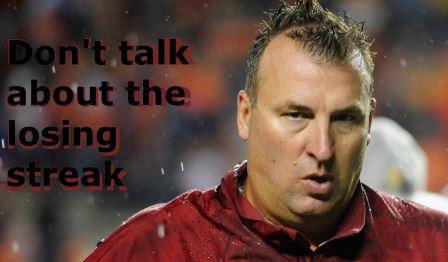 Because we still have an SEC monkey on our back, and I hate every week we can't throw it off.  Bye Week.  Get ready to be hated like you've never been hated before.

1. No Razorback Game. You know how you hate January, February, etc. Saturdays because there isn't any Razorback football?  You get so excited for football season, and then it's here and everyone's talking about the Razorbacks. Even when we lose, we're still getting props.  Now we have to sit around and not watch Jonathan Williams terrorize opposing secondaries.  It's depressing.  To go even further, I agreed to host a get together at my house this weekend to watch a football game not involving the Hogs.  Apparently 2 or 3 of the Tiger teams are playing each other on Saturday and we're going to watch that at my house.  I don't even have an excuse to wear Arkansas gear as they aren't playing.  Man, I hate Saturdays without Arkansas football.

2. The SEC West. Arkansas could be the best team to ever go winless in the SEC West.  I probably shouldn't be saying that 5 games into the season, but with a murderer's row in the division, it's hard not to at least wonder.  I understand that playing in the toughest division in the toughest conference is really a good thing, but it would be nice if Ole Miss, Mississippi State, and Auburn would just take a year or two off like Arkansas did the past two seasons and make everything easier on the rest of us.  The best team in the nation is almost assuredly in the SEC West, and no one would be surprised if the team going to Atlanta has 2 losses before the conference title game.  Some have even been bold enough to ask, "What if Everyone in the SEC West goes 9-3?".  This idea has Arkansas fans buzzing.  A) because the new tiebreaker would mean wins against Mizzou and Georgia could likely send the Hogs to Atlanta, and B) because, Oh yeah...  It means we'd have 5 SEC wins this season and would be going to a bowl game.

3. The NFL. I live in Louisiana (have I told you that before?) and if I turn on sports radio, I've got more Louisiana high school football, LSU football, and Saints football than I could ever handle.  Occasionally a national story breaks in, and I enjoy myself just a bit more that day.  Except for the fact that the only national story that has really broken in during the past few weeks has been Roger Goodell and the Angry Angry Players that Disgrace the Shield (copyright Robert Boyd 2014 - Hello sweet sweet non-licensed  NFL Children's book money).  I get tempted to just listen to the sound of my tires on the road while all of this is going on.  As a fan of college football, I hear coaches talk every week about how they aren't just making good football players, but they're making good men.  Apparently those good men aren't ending up in the NFL, because NFL players are giving everyone some nice big targets to hate, lately.  Go away NFL so that the national story will be how the Arkansas starting offensive line is the biggest in all of football!

5. 4th Quarter Comebacks. I hate them right now, for some strange reason.  I also hate watching teams hold on to two touchdown leads in the 4th quarter.  I will probably continue to hate these two things until I don't hate them anymore.  Stay Tuned.

6. Fall. I don't actually hate the Fall, but I do hate it's absence where I currently live.  As the air gets a little crisper, the leaves start to fall, you get a reason to put on that gray Razorback hoodie that's been washed too many times, and no longer has aglets on the ties for the hood.  The drive up I-540 I-49 is almost distracting with the rolling hills and a myriad of changing colors.  It really makes you miss the pure dawn on the brow of Fayetteville's beauty.  I can feel something watching me from the mountains of God, even though I've been flung far from the land where our footsteps have trod. I DO know that there is a beacon of hope on the Hill, and I feel pride in my loyal, true heart, but it's hard to be away from the mother of mothers.  Enjoy the Fall fellow Razorback fans, and think of me with a twinge of sadness as I'm mowing my grass at least once a week in November and hating every minute.

7. Jerry World. In general, I hate the idea that teams always win or always play well in a certain venue.  If you were to make a hat rack for the Razorbacks to hang their hat, you would have Bud Walton Arena, AT&T Stadium, and War Memorial.  I've seen enough hats fall off of these hooks over the last 5 years, that I don't want to hear about win streaks in any of these venues again.  And it's not that I don't want us to have venues where we are on a hot streak.  I just don't want "Undefeated in the Rock" shirts and "The Hogs Can't lose in Jerry World".  I especially don't want "Mike Anderson teams are great at home but terrible on the road", but that's a later Reasons to Hate article.  Don't put your stock in win streaks.