It's not unusual for a freshly signed high school recruit to be pumped up about his new school, but the enthusiasm Parade All-American linebacker Vin Ascolese is showing for Arkansas is on another level. He's already a fan favorite even though he hasn't so much as gone through a practice yet. His brazen tweets provide top notch message board fodder, usually with fans praising his true Razorback spirit. Area cougars are fawning over him. He's on pace to have the Ozark moonshiners name a batch after him, which I imagine is like having a Broadway theatre named after you if you're a playwright.

But all this was before Friday, when Ascolese unveiled his sonnet via twitter, titled simply, perfectly, "The Razorback". 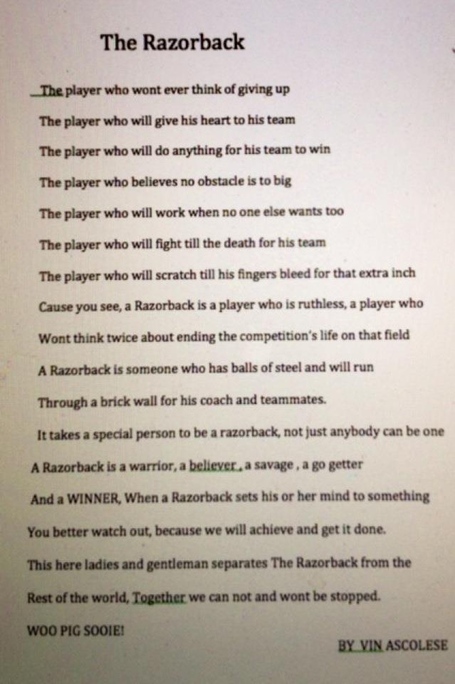 This will be taught in English lit classes throughout Arkansas for years to come. This sonnet is filled with metaphors "a Razorback is a warrior", imagery "balls of steel", and hyperbole "ending the competitions life on the field". He even acknowledges that a Razorback can be a man or woman, showing his 21st century cultural awareness.

UofA may make it the new alma mater. It's at least on the level of Tim Tebow's "I'm gonna play real hard" speech from 2008, the full text of which Florida immortalized on a plaque adorning it's football facility. This is the kind of thing that can be a rallying cry for a program. Like Tebow's speech or General Neyland's maxims at Tennessee. You can see the players reciting it before and/or after games.

I don't know if the university's acclaimed creative writing department was any part of Ascolese's decision to attend Arkansas, but let's hope he graces the department with his presence. Perhaps we'll see Vin in Fayetteville's finest coffee shops, and dominate poetry slams with the same ferocity he intends to take to the field. He may be society's key to bridging the gap between jocks and the artsy types who look at athletes with disdain. Ascolese is deep, y'all.

I hope to see more of Ascolese's artistic exploits. If he redshirts this year, could we get him to lead the band in the fight song at some point? Does anyone know if Vin plays any instruments? Can he play the fight song with a piano or violin or harp? Is he a painter? He could paint a Razorback on anything and folks here will jump all over it. Or design a mural for the back of the new scoreboard. I hope so.

It's rare to see a football player write poetry, but also to publish it in a public forum like twitter? That takes courage. Kudos to him. And, hallelujah, he spelled "Woo Pig Sooie" correctly!

Doc Harper is a regular contributor to ArkansasSports360.com and ArkansasExpats.com. You can email him at heydocharper@gmail.com and follow his thoughts and observations on Twitter @doc_harper.