Hiring an Interim Coach for Arkansas: A Humble Suggestion

Share All sharing options for: Hiring an Interim Coach for Arkansas: A Humble Suggestion

Despite the message board prophets declaring the contrary, no one knows what Jeff Long plans to do regarding the coaching search for the Razorback football team. The only thing we know, is that Long could hire an interim for season from within the current coaching staff, hire a permanent coach who might bring in his own staff, or hire a coach who'd basically be the face of the program for a year while allowing the current staff to run the team.

I have an idea I'd like to throw out there. I can think of a coach who is currently unemployed. He has strong ties to Arkansas. He's charismatic. Energetic. Commands the attention of the room when he speaks. His players love him and played hard for him. His locker room speeches, press conferences, and sideline ref trolling from are the stuff of legend. Aggressive play is key to his philosophy on both sides of the ball, and that style created a devout following from the Razorback fan base. Ladies and gentlemen, I give you: 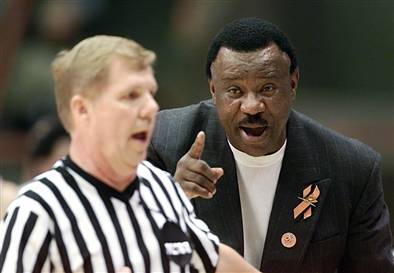 That's right. Nolan's led the Razorbacks to the promised land once, and by dang, he could do it again. Is anyone better at building an "us against the world" mindset than Nolan? This is the man who took a t-shirt that was printed in case Michigan beat Arkansas in 1994 and used that shirt as proof of disrespect. How dare anyone even insinuate the Razorbacks possibly lose a game! And after all the comments from pundits across the country declaring Arkansas unable to win the national title without Bobby Petrino, that would be putty in Nolan's hands. "They think you can't beat Alabama without Petrino!" It'd be like the Tim Tebow commercial, only with fire and emotion.

He did play football when he was younger, and nearly made the San Diego Chargers if not for a hamstring injury, so he does know the game. He even wanted to become a football coach before he became a basketball coach, but racial prejudices in El Paso prevented him from going that route.

Obstacles: 1) Not a football coach. This could be a hinderance. 2) Last time employed by the school, he sued them. That rubbed some people the wrong way.

But other than those things, why would anyone say no? Why not let the man become the only coach in history to win a basketball and football national championship? As far as coaching possibilities go, he's not John Gruden or the Ghost of Bear Bryant, but he'll do.

Doc Harper is a regular contributor to ArkansasSports360.com and ArkansasExpats.com. You can email him at heydocharper@gmail.com and follow his thoughts and observations on Twitter@doc_harper.