The Weekend That Will Be: True Fans

It's a true indicator of a truly weak day of football when a battle of two unranked teams is at the top of this list..

Share All sharing options for: The Weekend That Will Be: True Fans

Enjoy it because it's college football, and because you are a hardcore fan.

The faint of heart and lesser-invested fans will find this weekend as an bye week of sorts. But you're better than them. You'll still put 12 hours of football watching into this weekend because you care more. You'll refer back to this weekend at the watercooler in a month and those fake fans will be impressed by your depth of knowledge.

Those are the ones you want to be in your confidence pool when bowl season rolls around so you can steal their money.

The Gus Bus rolls back into Fayetteville looking to maintain the offensive rhythm he found in the first half of last week's game at Kentucky. That was before he had to hold on for dear life from losing to the Wildcats. I wrote it earlier this week, but at some point Bert has to back up some of his offseason chatter. Here's a viable opportunity to do so.

Both teams are coming off losses, A&M was blown out at home and Ole Miss was shutdown in the second half against a very good Memphis team. At the time of publishing, it remains uncertain whether or not Robert Nkemdiche will play (concussion) tomorrow. His surrounding cohorts are good, but the Rebels stand a much better chance with him.

i hadn't even graduated from high school the last time Tennessee beat Alabama. The closest the Vols have come in their last eight tries featured one of the most memorable blocked kicks in SEC history. Lane Kiffin was decked in orange and was trying to salvage his job. Alabama was ranked No. 1 (as it has been 4 of the last 8 years when these schools have met) and on its way to the first Saban Era national title. Some things never change... Terrence Cody blocked a kick and ran around like a wild man.

Don't expect for this game to be close in the fourth quarter.

When an undefeated and highly-ranked team is an underdog to a .500 team, you have to take the points. It's a line that seems so obvious that it will undoubtedly prove me wrong. The Utes have proven they can win anywhere against anyone this season.

Here's your chance Dabo: prove that Clemsoning is a thing of the past. The stats back him up, but we all have that little bit of doubt. Al Golden is all but a lame duck coach and will pull out all the stops to try and save his job against the highest-ranked opponent his team will face for the rest of the year. 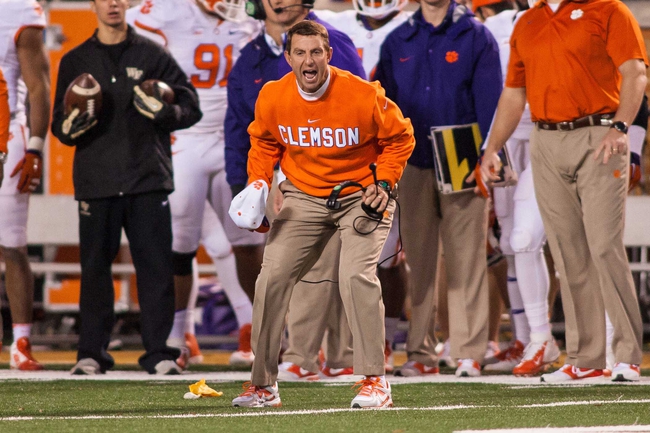 Coming off one of the most historic finishes in the history of the game, Michigan State will look to avoid the upset by a high-scoring offense from Bloomington. Indiana can score against the best of defenses, as it showed in its near surprise versus Ohio State. Sparty will be forced to score more than its season average if they want to avoid letdown central.

Here are two teams who are lurking in the middle of the conference with a chance each week for an upset bid. now they'll get their shot at one another. At home, with the more venerated quarterback, and a stronger defense, I like the Bulldogs to win by a couple of scores.

The Cardinal are the most underanked team in the country at No. 10. They boast Heisman-caliber running back, Christian McCaffrey, who is not getting his due love because he plays his games late. Their stock will continue to rise as others fall, but look to their end of season matchup with Notre Dame as a possible playoff play-in game. Oh and in this game? Take whatever points Stanford gets; the Huskies are a mess right now. There was no line set at time of publishing.

Home dogs Tech have lost their last five games after being touted all offseason as a possible playoff team. In come the Seminoles off of a thrashing of Louisville and a healthier-by-the-week Dalvin Cook. Though the Noles have struggled previously with the triple-option, I still like this oddly low line nonetheless.

I wrote last week that Vandy had its best shot at its first Derek Mason-coached conference win last week at South Carolina. I stand corrected. In comes Missouri, which has lost any sense of an offense and hasn't scored a touchdown in nearly two games. If they can't get it going this week then it is time to start all over. The Tiger defense should have a good night against whoever plays quarterback for the Dores.

Duke (+3) at Virginia Tech -- Dukies have let me down all season. Why stray now?

Ohio State (-21) at Rutgers -- JT Barrett's offense should do well