In the third and final installment of our Q&A with former Razorback great U.S. Reed, the Pine Bluff native talks about Eddie Sutton's perm, how the '78 Final Four squad would fare against the '94 national championship team, and trying to make the NBA. (Here are Parts 1 and 2.) Many, many thanks to U.S. for his time and graciousness. And a special tip of the hat to Kevin Crass, a friend of the blog and a high-school teammate of Reed's who helped us get in contact with U.S.

Expats: During your time in Fayetteville, who were the guys who kept everybody loose, and who were the locker-room leaders?

Reed: Well, all of The Triplets would keep things going and keep people laughing.

Expats: What was Coach Sutton like to play for?

Reed: He was a great coach to play for. He was a real disciplinarian. He was a stickler for doing certain things a certain way.

He was really defensive oriented. He didn't really care too much about scoring - he knew you were going to do that. But he wanted you to stop the other team. He really got excited over defense, which wins games.

During that era, there wasn't a shot clock or three-point shots, so defense was really key.

Expats: We have kind of a goofy question. You were at Arkansas when Sutton went from having straight hair to a perm. We were wondering about the first time he appeared in front of the team with his new ‘do. Did you guys have to work hard to keep from laughing?

Reed: We kind of joked around with him. Everybody kept saying, "You've got hair like U.S. now."

Coach Sutton was the kind of guy who liked to dress and liked to look good. He had a little ego, a little swagger. So, it wasn't a big surprise.

Expats: If the 1978 team played the national championship team, who would win? 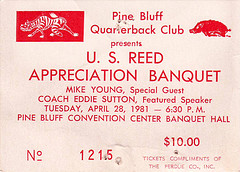 Expats: There's actually a Web site that simulates games. You can enter in teams from different eras, and it simulates games between the two. I've done it before with that 78 team and more recent teams. It comes out pretty even. If you run, say, 10 games, one team will win five or six.

Reed: I think it would have been like that in real life too. 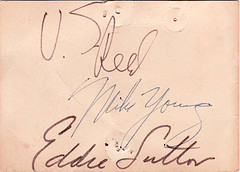 Expats: Do you still follow the basketball team pretty closely?

Reed: Yeah - any Arkansas team. Basketball, football, baseball. You always watch and root for them because you're an alumni. Oh, yeah.

Expats: You had several near misses with the NBA. You nearly made the Kings one year and then the Spurs in another. You were the CBA Rookie of the Year with the Montana Golden Nuggets. At what point did you decide to quit trying to make it in the NBA? Was it hard to let go of basketball at that point, or were you ready to move on?

Reed: You're right: When I was playing ball, you run into situations where they're just aren't enough jobs. It's not a matter of if you're good enough. It's a matter of going to the right team at the right time.

You see players today - somebody may have been cut three or four times, and now he's on the Orlando Magic or the Lakers playing for the championship.

As for me in particular, the Kings let me go, and then George Karl [who was then the coach of Montana] called me and said, "Look, come play for me. I can get you back in the league."

And then I went to San Antonio and hurt my knee. Different little things happened.

I had offers to go overseas. It came to a point where you think, "Do you still want to chase this?"

I think what makes a lot of difference is your family life. My mother was an elderly person. My father had died, and I really didn't want to go far from home.

I probably would have kept playing if I had had two parents at home and my mother was a little younger. You make decisions based on your family situation.

I turned down some pretty good offers to go overseas. You may kind of regret it later on when you look back on it. When you're a young man, you're the man of the house.

Expats: What was the closest you came to making the NBA?

Reed: A lot of times, it's a matter of contracts and numbers. I bounced around to Utah, San Antonio, Kansas City. They'll tell you, "Even though you may be real good, you can't stay on the team because so and so has got a guaranteed deal, or we've got this contact over here."

It's a weird situation. It's a business. It's not like the best player always plays. It's kind of like looking for a job. You may be qualified for a job, but there's so many people ahead of you. So you get caught in the numbers game.

During those years, there weren't as many teams as there are now, so there were fewer chances to make a team.

But you look back, and it was a great experience to even get that far. Just to even experience it.