SEC POWER Rankings: We Know Nothing

That's the only certainty in the SEC.

Share All sharing options for: SEC POWER Rankings: We Know Nothing

What was up is down. What was left is right. Who was good is bad. That's where we stand five weeks into the 2015 season.

Truth is, there are no great teams that have emerged. Each has its own flaw that can be exposed if tested. This is not an epidemic specific to the SEC. It permeates all of college football. Even the mighty Ohio State, which at the beginning of the season was expected to contend as one of the all-time great teams, has struggled to survive from week to week.

Looking back at these POWER Rankings after Thanksgiving weekend will likely be a comedic activity. Nonetheless, here's where we stand so far:

That didn't take long, and you're welcome for the bulletin board material. I'm told that Nick Saban reads these religiously. Remove the Tide from atop my POWER Rankings for two weeks and you know he'll use it as motivation for his team. The Tide came away from the weekend with the most impressive SEC win of the season. Side note: We're not giving Alabama credit for being the first team with oxygen on the sideline, right? See any game played at Mile High Stadium for the last 10 years.

As is the case with most non-conference matchups for LSU, it wasn't pretty and it took more effort than it probably should have. Leo Fournette picked up his third consecutive 200-yard game. He's so good that he covers up the fact that quarterback Brandon Harris had only 80 yards passing.

The Aggies continue to improve steadily each week. A bye on Saturday is goo timing as they get ready for a home date with Alabama.

Undefeated start and signature win against a top-3 team? Check and check. Jim McElwain is working some magic in Gainesville with the talent he inherited. Quarterback Will Grier should get the flu more often as he threw only five incompletions four scores against a once celebrated Ole Miss defense. The Gators currently hold the top conference record and should be undefeated, assuming a win over Mizzou this weekend as they head to LSU.

The Rebels are at a serious crossroads. With the talent available to him this could Hugh Freeze's only loss of the season. Of course, this being Ole Miss, it could also be the start of a 7-5 disappointment. Chad Kelly can't be your leading rusher with 40 yards going forward.

Thanks to guest correspondent Bishop Bullwinkle for joining us. Mr. Bullwinkle, can Mark Richt ever win the big game?

The Bulldog defense figured out the A&M offense about as well as Dan Mullen has mastered good posture. Luckily for them their schedule lightens up a bit before heading to a Alabama-Arkansas-Ole Miss trident to end the season.

The Wildcats flirted with a serious setback, as it took overtime to beat in-state foe, Eastern Kentucky. This is a work in progress so expect to see them struggle from time to time.

The Arkansas defense didn't allow a touchdown after the first quarter. This is good. The offense controlled the tempo and ran with authority. This is good. Bret Bielema earned his first SEC road win. This is very good.

Can you say quarterback controversy? With starter Maty Mauk suspended, Drew Lock stepped up and led the offense, going 21-28 for two touchdowns. While he averaged under five yards per completion, he protected the football, did not throw a pick and won a conference game. These are things Mauk hasn't mastered this season.

Butch Jones said three years ago that it would take three years to get his system/players in and to have this team contending. It's been three years. Florida's Jim McElwain's early success is not helping Jones' case.

Vandy took the lead with 1:12 over Middle Tennessee State and never looked back. I mean that's with 72 seconds left in the game... Yet another SEC East team that let an in-state opponent hang around too long for comfort.

All of a sudden a trip to Lexington doesn't look so easy.

Nothing new here. The Gamecocks are a mess. Could Steve Spurrier bring this team back to prominence? I believe so. Does he have the time or moreso the drive to do so? Probably not. At least he's got a decent pair of hater blockers. 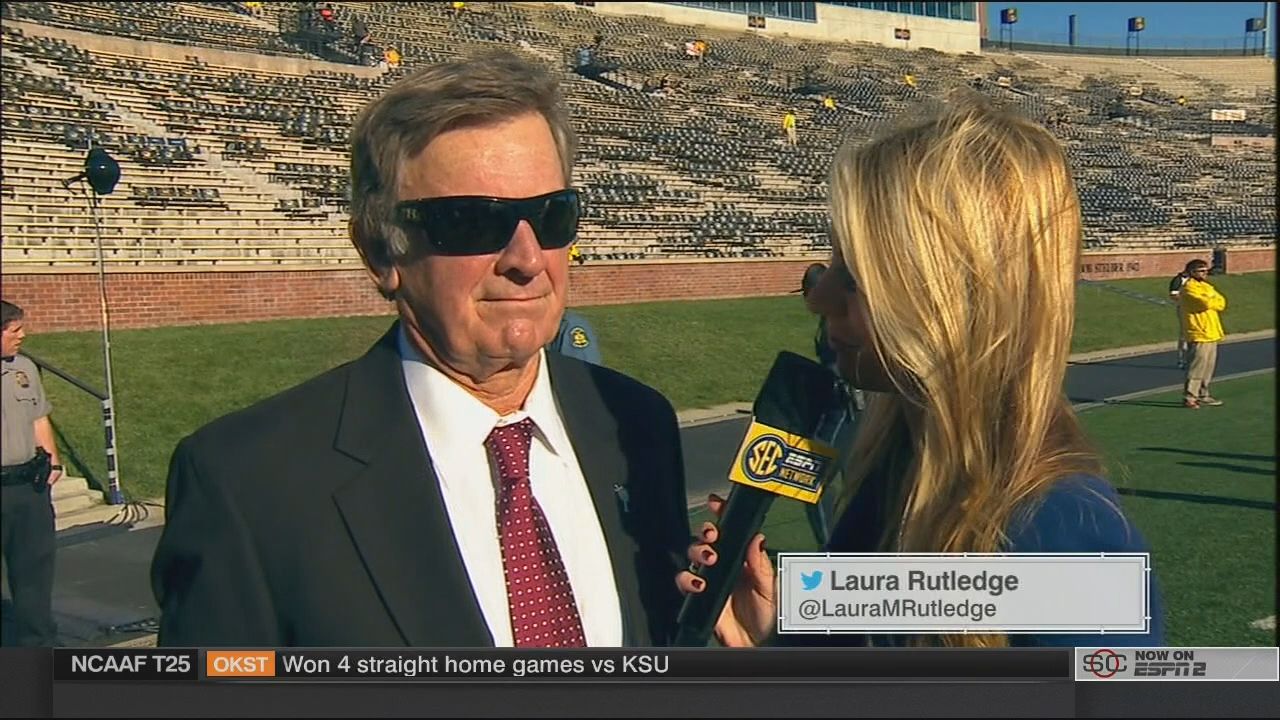