Arkansas won the toss, elected for defense first, but the Aggies scored on their first play leading to a stop on 4th down to end the game. What went wrong on this specific play for the Razorbacks?

Share All sharing options for: Breaking Down Texas A&M's Overtime Touchdown vs Arkansas: What Went Wrong?

Over the course of a close sixty-minute game, any number of plays and scenarios can be the deciding factor. In Saturday's Arkansas/Texas A&M game, Hog fans will likely remember (for different reasons) several of the plays in regulation, but we wanted to look at the Aggies' easy touchdown in overtime. What happened to allow the easy 25-yard score?

**Note** This breakdown, by Adam Ford and myself (Josh Goforth), is not meant as an overall breakdown of the entire game, just this one play, personnel and assignments.

Adam Ford: By this point in the game, Texas A&M is in attack mode mentality. They know the Hogs don't know how to finish games and are on the ropes. Arkansas' mentality is "they're going to dink and dunk down the field and try to get into the endzone," but the Aggies wanted to deliver the knockout punch. Attitude is important. Of the three choices, it boils down to execution, but Malcome Kennedy clearly saw he had a play based on alignment, hence his false start (that went uncalled).

Josh: Kennedy moves, but does not move his front foot or go across the neutral zone. If Arkansas would have jumped across the line a flag might have been thrown on Kennedy. That is the kind of thing a more experienced team would do, but this team just isn't there yet.

A&M is lined up in the pistol with Carson behind Hill in the backfield. Cameron Clear is lined up as an Hback and Seals-Jones wide to the outside, Kennedy in the slot. As Kenny Hill goes through his pre snap reads and snap count the Aggies bring TE Cameron Clear across the formation from left to right to determine whether the coverage is man or zone, and to force Arkansas to show if they have a blitz called. The Razorback defense does not shift, but Ellis does step up like he may be coming on the inside or have the back out of the backfield. 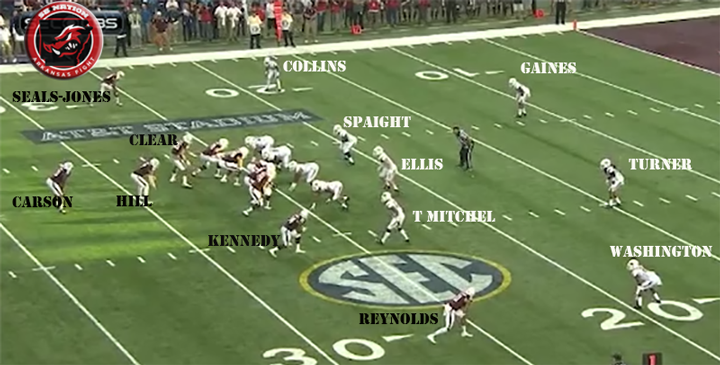 It appears this was a packaged play where Hill could throw either the swing screen to Carson out of the backfield or he could hit Kennedy on the crack and go or slant and go up the seam. Kennedy knew pre snap that Mitchel was responsible for the flats and that the route of Carson would bring him up. The only thing left for him to do was to fake a block on Ellis and then beat him up the hash in between the safeties.

Adam Ford on the coverage: It's hard to tell, but Arkansas used a ton of Tampa 2 coverage, meaning that Ellis and Turner would share some blame. If you watch the left side of the field, you see very clear Cover 2 zone with Gaines taking a deep half, the corner playing curl to flat, the linebacker (Spaight) dropping into a hook. If it's the same for the right side, then the nickel is playing the hook, so he's not at fault for a bust deep.

Josh: It looked like Ellis had the #2 WR on that side if he went vertical (which he did after the stalk block). Sumlin seemed to throw at Ellis quite a bit in this game where he thought he had a favorable matchup.

Josh: Looked like Turners first steps were to come downhill on the swing screen, his keys are usually the tackle, but looked like he saw the guard block screen and came up. Puts him in a tough place because if he stays back and they throw the screen you have T Mitchel with a 300 lb guard leading for a 230 lb runningback with a head of steam.

Adam Ford: I can't tell what Ellis was supposed to be doing. He may have been a spy against the run or he may have supposed to have been deeper (Tampa). Either way, Turner has to help over the top. I assume he bit on the fake screen.