Share All sharing options for: Hurry Up Vs Weight: Texas A&M Preview

Well its back to the games that really count. SEC game #2, one that before the season was looked at as an opportunity to pick up that first conference win of the Bielema era. Like usual, assumptions for hog fans seem to go in the opposite direction. An easy example would be thinking Bobby P would stick around Fayetteville for a decade or that John L could just get out of the way of a highly talented team and let the assistants run the show. Neither came to be, and neither will the idea that this A&M team PJF (Post Johnny Football) will be the easiest SEC game on the schedule. Winnable yes, but I have a feeling it will be a 12 round knock down fight.

The Aggies had a rough start to the game against a weak SMU team with Kenny Hill throwing a pick on the second drive and several delay of game, holding, taunting penalties.

Sumlin was not feeling any of that, and I have to think that they will be ready to play when A&M and Arkansas roll in to Jerryworld.

Aggies have a group of tall WRs mixed with Malcome Kennedy at 6'0 who is quicker in space. Speedy Noil is out with a knee injury which makes this group a little less talented. Ricky Seals-Jones has the size that will be difficult for the Arkansas secondary to defend. It would not be a stretch to say this group has the most talent of any WR corp in the nation. Undoubtedly Rohan Gaines will be an immediate target as Auburn went right at him early also. He has stepped up his play in the last two weeks and the Secondary will need a stellar performance from him in this one.

The bubble screen was used with a lot of success by NIU, and some by Texas Tech. It is a staple of the Air Raid and there are not many that have been better at running it than Kennedy. Kenny Hill gets the ball out quick and lets Kennedy work out there.

In the game against NIU the Arkansas offense added a few new twists. Using 6'6 307lb Cameron Jefferson as a TE added even more heft to an already massive oline. Jefferson has the ability to moves as fluidly as a TE and basically puts the Hogs in an unbalanced set. Wearing the #89 jersey with no name on the back was a little odd to see, but it adds another dimension to short yardage, goal line, and even some playaction passing as you can see in the gif below. Can he sneak out of the backfield for one of those wide open play action TD passes?

Also late in the blowout of NIU Chaney called the wildcat/wildhog set with Alex Collins taking the snap. First of that they have used this year, Kiero Small, and Collins ran it some last year. Im interested to see if it is something that will be used against A&M or if it was just more film room trickery.

Texas A&M linebacker depth: Are they at deeper than 5yds?

If A&M can keep their LBs free of the 2nd level blocks by Arkansas Oline. Look on the first few drives to see if they are getting downfield on the Aggie LBs.

Who is covering Seal Jones in the red zone?

A tough cover for two reasons, take away the fade, and they will run the wide slant like the pic below. Play inside and they will throw it up for a jump ball in the back corner. Will the Arkansas corners be able to redirect him at the line? 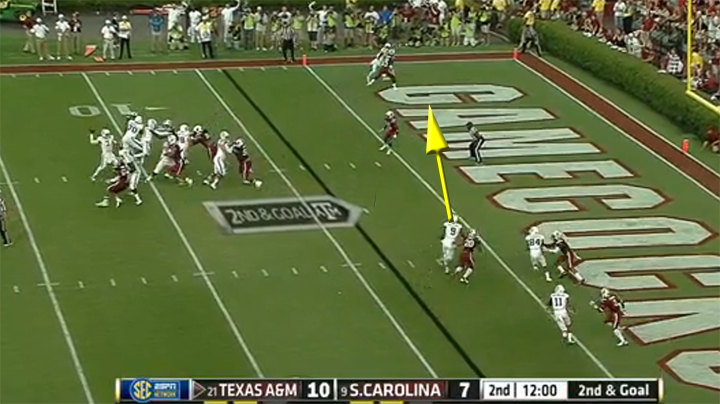 A win versus A&M would set the stage for the redemption of Arkansas Football. Waiting through the last few forgotten years of turmoil to see a team jump up the rankings would throw the state into full on craziness for the Alabama game. This team has started to work like a fine tuned machine, and against a top 10 team there will not be any room for mistakes. It will come down to one or two series whether either team can get a stop or convert. This is the point where we see for sure whether or not the talent is there or whether this team is still a few pieces away.