The Weekend That Will Be: College Football Picks Week 3

The record last week was nothing to write home about, but it was enough to hold off the competition.

Share All sharing options for: The Weekend That Will Be: College Football Picks Week 3

There's some catching up to do if Arkansas Fight is going to win our season-long competition with the Razorbloggers. The bad guys are 3-6-1(33% win percentage) after the second week of games. Your boy here had an unspectacular weekend and fell to hitting on only 42% of games. It's a number that I'm not proud of and am promising to improve as soon as conference play begins. I am a sucker to a fault for favorites during non-conference play.

UCF at No. 19 Missouri, SEC Network (-9.5 Mizzou)- In two non-conference starts, the Tigers have rarely impressed. They began to find themselves on the road last week at Toledo. Maty Mauk returns to last season's form and Mizzou makes the UCF loss a little less painful than the game-winning field goal fate the Knights suffered in Ireland.

No. 21 Louisville at Virginia, ESPN3 (-6.5 UL)- The Cavaliers proved on the opening weekend that they can stop a good offense. BMFP takes his team on the road for the first time. The offense has been good, but the defense will let them down. I like the Cavs to cover at home.

Arkansas at Texas Tech, 3:30 p.m. ABC (-2 TTU)- The Razorbacks under Bielema on the road. That puts no confidence in me. Nor does the fact that the Red Raiders want to pass the ball all day long if possible. Need to instill confidence? See why "Texas Tech's Run Defense is Horrible" from our own Adam Ford. In what will be a pick 'em game by kickoff, I can't go against my boys. #3-0

No. 6 Georgia at No. 24 South Carolina, 3:30 p.m. CBS (-5.5 UGA)- Simply put, the Bulldogs haven't played well in Columbia recently, losing two of the last three. The last Georgia quarterback to toss for a touchdown in Columbia was David Greene in 2006. Gas was under $3.00/gallon and Justin Timberlake held the top spot on the Billboard Top 40 with "Sexyback." There's a good chance UGA goes without a passing touchdown again, but I still like them to win by at least a touchdown.

Kentucky at Florida, SEC Network 7:30 p.m. (-17 UF)- As stated in this week's SEC Power Rankings, the Gators have yet to allow a point at home this season. Both of these schools have improving football programs. However, with his job on the line this season head coach Will Muschamp goes ahead and blows out the Wildcats.

Tennessee at No. 4 Oklahoma, 8 p.m., ABC (-20.5 OU)- This Oklahoma team is good. Could win the College Football Playoff good. Tennessee has shown glimpses of things to come, but the Sooner offense will be too much for the Vols. In the name of SEC pride I'll take the cover, though.

Here is one of my favorite stadium pictures ever from an often underrated Gaylord Family Oklahoma Memorial Stadium. 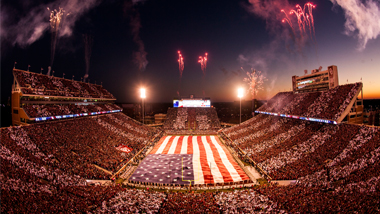 No. 12 UCLA at Texas, 8 p.m., FOX (-7.5 UCLA)- This is absurd. For three weeks now I have taken the Bruins to cover. Week 1 was a nail-biter in Charlottesville, Virginia. The second game was a win over #Menphis by a whole seven points. Because the odds have to favor me at some point, enjoy the Longhorn dumpster fire for another week.

No. 9 USC at Boston College, 8 p.m., ESPN (-17 USC)- Steve Sarkisian has this group Trojans looking good. A recruiting trip to the East Coast can only go in their favor. Rivalry? Yeah right... The Eagles looked dreadful against one FBS opponent. Look for that trend to continue.

Navy (-10) at Texas State- Talk about a team who plays to their competition. The Midshipmen played Ohio State to the final quarter then were beat by Temple. The Owls are improving, but I still like Navy on September 11th weekend. Go America!