The two head coaches represent the stark contrast as well as any metaphor. But on the field none of that really matters because for many fans this game is a make-or-break point in rebuilding the Razorback football program.

A product of the Hal Mumme, Mike Leach, Kevin Sumlin philosophy, we know Kliff Kingsbury with sling the ball through the air. Texas Tech has run 148 plays so far this season while Arkansas has run 114. The Texas Tech offense is built on stretching the field both from sideline to sideline, and down the field. They will use four and five WRs on most downs, and attempt to run the ball with the defense backed off in pass defense. Arkansas has struggled in pass defense early this year, so will they be able to get some stops?

Bradley Marquez and Jakeem Grant are the primary targets with tight end Jace Amaro gone to the NFL. This past spring I put together a post Texas Tech spring game breakdown that you can check out here. Marquez and Grant are still the go to guys for this team, and a huge part of the Arkansas game plan will be devoted to finding a way to stop them.

The same old concepts that Sumlin, Leach, and Dana Holgorsen have used forever are prevalent in the Texas Tech playbook. Here are a couple to look for that will be challenging for Arkansas to cover. Many of those plays include a variation of a shallow cross. This player can be used as the 1st option or as a check down. For Arkansas it will be important to see of they can cover deep over the middle with the safeties and not use deeper drops by the linebackers to help. If those linebackers start dropping in the 8-9 yd range then the shallow routes will be open on a regular basis. 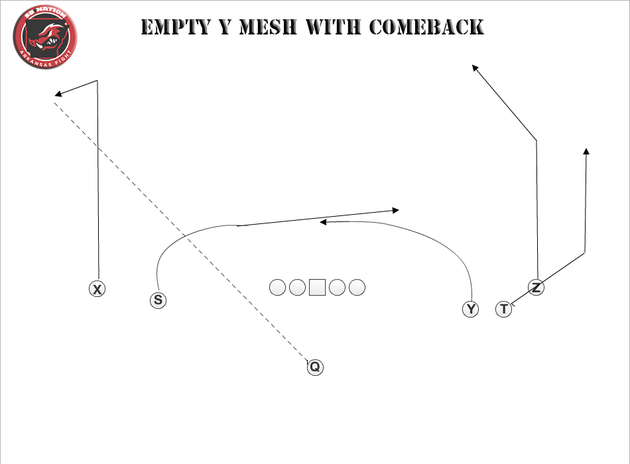 Another passing concept that Tech uses is the "Flash" route which is even shallower than the under or the cross. The WR comes straight down the line toward the center. Combined with other routes, this stretches the coverage into either giving up a short underneath gain with potential yards after the catch or getting beat over the top. The corners for Arkansas must be physical in disrupting the timing involved and give the pass rush time to get the the QB.

The Red Raiders will look to throw some short screens that are basically long hand offs. After that has shown some success they will throw in a fake like this to try to catch an overaggressive safety cheating up. Auburn ran something similar and I would be surprised if we didn't see the same thing against Arkansas.

Not much more to add than what Adam said his breakdown of the Texas Tech run defense. The offensive line and trio of backs just need to do what they have been doing. Nothing special, just grind it down the teeth of an undersized defensive line that will be throwing as many players into the box as they can. Tech showed some exotic blitzes in their first few games with pressure, I look for them to send everything they have at Brandon Allen and hope for the best.

Watch the Referee: Expect to see a lot of this, where the referee is standing in front of the QB holding up the play. Will they let TTech run at fast pace, and will Arkansas be able to get lined up?

Watch the LB pursuit and open field tackles: Martrell Spaight will get some opportunities on WRs and RBs who are fighting for extra yards. Maybe someone else will get "Spaighted"?