Is Arkansas becoming Oline U? Recruiting would say yes, but for 2014 they will have to find a replacement for an All-SEC Center and a veteran LT.

Share All sharing options for: The Arkansas Razorbacks Offensive Line - An In-Depth Look

The chaotic hand to hand combat in the trenches is often not given much attention during a typical TV broadcast. These overlooked offensive lineman are given the task of opening running lanes and protecting the quarterback long enough to get rid of the ball, but a missed assignment or poorly executed technique can change the course of a play, and even a series. Sam Pittman, in his second season as the Offensive Line Coach for the Razorbacks, has the responsibility of preparing this group of lineman for another season in the SEC.

"For years, every offensive line coach knows, if the back rushes for over 200 yards you’ve got a great back, and if he rushes for fifteen, your line is terrible," Pittman said. "If the quarterback throws for 300 yards, he’s a great quarterback, and if he throws for 10, you couldn’t protect him. It has always been that, it’s that way at every university, so if you’re looking to win a popularity contest, don’t coach the offensive line." Sam Pittman

The interesting combination between Sam Pittman, OC Jim Chaney and HC Bret Bielema has resulted in the mixture of zone blocking plays and man/ gap plays in the running game. These two different philosophies add to the complex game that goes on in the trenches.

The one and only Bob Davie put together a good explanation of the differences here for ESPN. And a video explanation from Brian Billick as well.

Arkansas in 2013 was similiar to the Wisconsin teams under Bielema in terms of blocking schemes with some slight differences. He used pin and pull techniques, as well as straight inside and outside zone techniques with combo blocks. They used more zone runs than his Wisconsin teams in the past most likely due to having so many young guys playing early.

Plays that took advantage of Travis Swanson's athletic ability like the Power O, Wham and other center pulling plays were also used more often. Also the fact that Alex Collins excels in zone blocking where he can cut back and has several running options added to the number of zone runs. As the young guys develop and his prototype in size and weight is recruited on the line look for more man/gap schemes with drive blocking.

There will likely been some shakeups on this group before the first game at Auburn. I will address some of the main questions with them and look at who can fill some of the open spots.

"I think anytime that you lose two starters it takes a little bit of time to jell together. It's not only that we lost two starters but we moved a starter from guard to tackle. However, we have to get better and I think you'll see that in this Saturday's scrimmage." Sam Pittman

Who will replace Travis Swanson and how will that change the blocking up front?

Travis Swanson was as much the QB of the 2013 team as Brandon Allen. He made the calls at the line of scrimmage indicating what front the defense was in, where the Mike LB was, and set the protections in passing downs.

Swanson is projected as a 3rd to 4th rounder in the NFL.

His experience will be missed in 2014 after making 50 starts at center throughout his career. The offense depended a lot on his athleticism last year. Will Luke Charpentier be able to do the same or will the blocking schemes be changed to reflect his skill set?

"Ive been very impressed with Luke Charpentier, to lose Travis Swanson and realize how good of a player he is and to not have a blaring hole at that position says a lot about Luke."

Brandon Allen will have to make some of the calls that Swanson did last year. Will this be an area that is mistake free? Probably not. Allen will be called upon to increase his leadership role and put his teammates in the right place. The only way this can be accomplished is if everyone is on the same page and is able to identify who to block on a given situation. Not an easy task, look for some early struggles and for opposing DCs to attempt to confuse the center with many different looks.

Dan Skipper at 6'10 was not a typical guard in any way at all. His time there as a freshman was a way for him to be introduced to the level of play early and give him some experience. Most guards in the NFL are under 6-5 and have more quickness than a tackle. The athletic ability by Skipper on this run by Williams is impressive and is the reason he was able to play as a true freshman at the guard position. 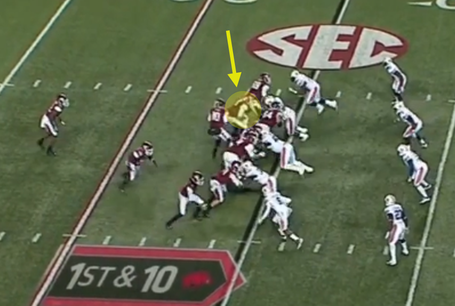 He will be asked to do different things at tackle. In spring practices so far he has been moved out to LT where they have the option to isolate him one on one when needed. This will free up other blockers to get to the second level or to help in passing situations by sliding the protection away. From the reports and what I have witnessed in the open scrimmage he has some way to go in order to hold up as a dependable LT.

Mitch Smothers has been with the 1st team so far in spring and has a shot to win the battle for the starting LG position. He played early in his freshmen season, and started the first four in 2013 until Dan Skipper replaced him for the last eight games. Whether or not he finds a level of consistency quickly will be something to watch going through fall camp. This may be the most competitive position battle on the team. (Look out for Reeve Koehler, Grady Ollison, or possibly Frank Ragnow in the fall to fight for time)

On this play early in the season Smothers pulls and shows the ability to move in space while Collins makes one of his signature cutbacks.

But versus Rutgers he struggled and Skipper finished out the season. He will be asked to find a consistency to keep that spot with incoming freshmen looking for playing time in the fall.

Protecting the QB in passing situations

No doubt Arkansas will be a run first, play action passing team in 2014. Most of the big passing plays came off of some sort of play action in the backfield and the majority were on quick drops. They want the QB to get the ball out of his hands quickly and decisively to avoid sacks, which makes the job of the offensive line easier.

As a unit the Oline gave up only eight sacks in 2013 which was good for 3rd best in NCAA FBS. This number is a little decieving considering Arkansas also ranked 112 out of 123 teams in pass attempts. With such a run emphasis the protection of the QB is much easier than in other offenses.

In the final game of the season vs LSU there were some signs that pass protection had improved and then there was the last play of the game which shot that theory to pieces. 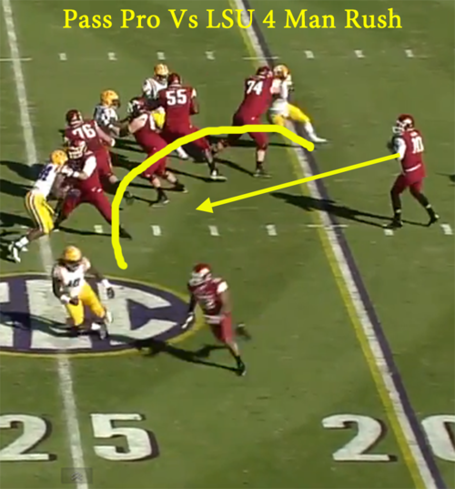 Blitz pick up will be an important aspect this season. Teams will be sending 5 and 6 rushers on 3rd down as most did last season. LSU sent a corner off the edge on the strip sack fumble that ended the game and season for the Razorbacks. They only sent 5 but overloaded the center and guard, and the entire left side completely blew the blitz pick up giving a free path to the QB. Either a hot call was missed or a lineman simply did not recognize the blitz off the edge and in the B Gap.

What will the Offensive Line be in 2014?

Most would say when looking at each position group that the strengths of this team would be on the offensive and defensive lines and the running backs. I am putting a lot more stock into what Travis Swanson contributed to the Razorbacks and believe that it will be difficult to replace that much experience and knowledge quickly.

On the right side of the Oline this team will be solid with Brey Cook and Denver Kirkland. Will the play calling early be right side heavy and become predictable? Probably so.

Whoever comes out of the battle for the LG and Center position will be an important aspect in the success of the Razorbacks in 2014. In passing situations and play action, just holding blocks for that extra half second will make a big difference. Collins and Williams are capable of beating tacklers one on one, the main key is to not allow tackles for loss that result in 2 and 12 or 3rd and 8+ and force them in to bad situations.

Sometimes live game experience is the only way to see who can withstand the mental and physical fight that occurs at the line of scrimmage. Until Aug 30th it is difficult to tell where this group stands. I think they are better overall right now, but losing the QB of the OLine is never easy and only until after those first few series will we really be able to tell if this group is ready.

This group has the talent to emerge as a dominant SEC bulldozing offensive line and earn the title of OLINE-U! There's just some further development and questions they'll have to answer in order to get there.