The Razorbacks take on an Ole Miss team (on the interwebs of ESPN 3) that has lost five of its last six games.

Arkansas and Ole Miss are going in different directions at this point in the season, with the Rebels losing five of their last six games and seven of their last ten, but the Rebels could still put an ugly mark on the Razorbacks' resume by ending Arkansas' five game winning streak. This team has risen above its earlier struggles in consistency and has shown a new layer of poise down the stretch.

Arkansas has only been 1-6 against Ole Miss in the last four seasons, and the SEC's resident villain Marshall Henderson seems to thrive in hostile atmospheres. Everyone who watches any SEC basketball has been witness to some Marshall Henderson's antics, and there will most likely be some again at Bud Walton Arena.

Arkansas' resume and RPI are the only two things that a lot of fans are thinking about at this point. Would it be nice if they could keep rolling through the SEC Tournament and win it all? Sure, but for a fan base that has not had a team in the NCAA Tourney since 2008, it's just getting to the NCAA Tournament that really matters.

ESPN Bracket Bubbleologists, and several others have Arkansas as being likely in, with the win over Kentucky being a major factor. A loss to a struggling Ole Miss at home would make it tougher to stay on the top side of that cut line. 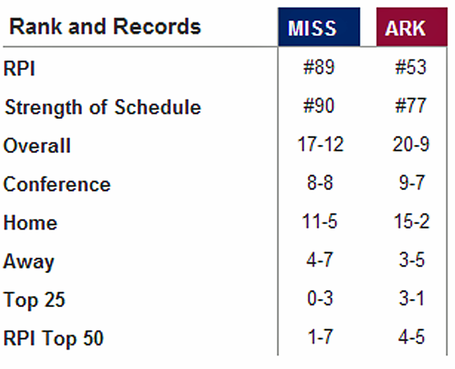 *With the way this team has been forcing turnovers I take that aspect for granted as a key.

-Stopping Marshall Henderson and Jarvis Summers. Keeping Henderson from getting hot is an important part of shutting down Ole Miss. He has attempted 318 3pt shots which is close to 2X as many as the next closest in the SEC, and made 36%. (Breaking Pat Bradley's record for most consecutive games with a three last week)

The big question for me is whether Coach Anderson will defend him with Ky Madden, Fred Gulley, or Mardracus Wade. Madden has the height to contest shots on the high release that Henderson uses, although there are times when he'll shoot  no matter how open he is and who is guarding him. Wade is generally considered one of Arkansas' best perimeter defenders.

If Arkansas can play Michael Qualls on Jarvis Summers, a slasher and gets to the free throw line on a consistent basis, then Arkansas should be able to stifle some of the Ole Miss offense.

-Scoring points in the half court by using on ball screens- Ole Miss uses three guards most of the time with Henderson (6'2), Jarvis Summers (6'3), and Martavious Newby (6'3). Ladarius White (6'6) gets about 20 mins a game and adds some length to the Ole Miss guards. Compare that with the lineup that Anderson has been putting on the floor of Madden (6'5), Gulley (6'2) and Qualls (6'6). Qualls and Madden should have some opportunities with a smaller defender on pick and roll situations.

-The Stats- Statistically, these teams are pretty similar, and there's not a glaring advantage for one team over the other. They have many of the same strengths and weaknesses. Arkansas' biggest advantage is defense against two-point shots. The Hogs are one of the better teams in the league in that category while Ole Miss is one of the worst shooting teams inside the arc.

Arkansas is also taller than the Rebels down low. Ole Miss will most likely have to have a hot shooting night from three point land to win the game.

Arkansas has used this as their go to late game play to drive and draw a foul or get a post up situation for Portis or Harris on the block. I would like to see them use this more during the normal course of the game. 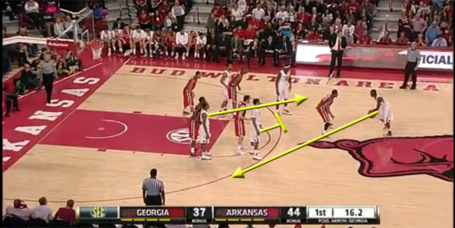 The ballhandler (Gulley in this case) can go either way depending on what the defense shows. 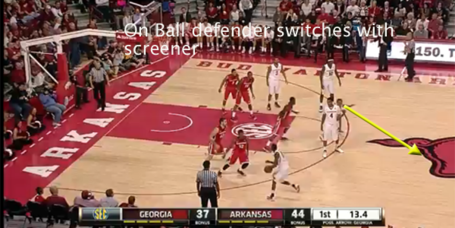 Opportunities for favorable matchups come out of switches by the defense.

In this case against Kentucky, Haydar has the best matchup and draws a foul resulting in two free throws. 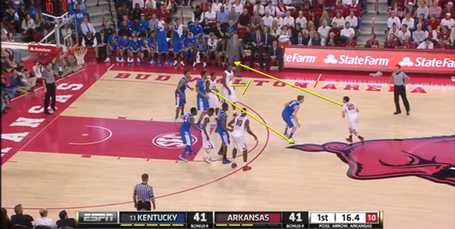 Mike Anderson-"As a coach when you have leadership taking place and the ownership, all you have to do is stay out of the way."

This team has figured out their roles and where they fit together. Consistency has been established, and the high pressure has been creating easy scoring opportunities. This version of the Razorbacks no longer falter in clutch situations and seem to come up with big plays when it is most needed. Can they continue this trend in the final two games and ride the momentum into the SEC Tournament? The veteran plays like Kikko Haydar, Coty Clarke, Alandise Harris and Ky Madden have shown they understand what it takes.

Against Ole Miss, the game will be as much mental as anything else. Not allowing whatever distractions that Henderson is involved in to take away from the game, and having the mindset to overcome any runs that he and Summers are able to make will be an important part. Henderson will make shots, the biggest factor will be whether this Arkansas team will answer to stuff any momentum and keep the Bud energized.