After a much needed win over Alabama, the Hogs again look to find a way to win at Vanderbilt.

Share All sharing options for: Arkansas vs Vanderbilt Basketball Preview

Can a win over Alabama and the emergence of Bobby Portis finally bring an end to Mike Anderson's teams struggles on the road? Arkansas has lost 2 of its last 3 at Vanderbilt, not counting the SEC Tourney loss to the Commodores last season at their other Nashville gym at Bridgestone Arena. (How strange was that?)

Vanderbilt comes in to this game on a four game winning streak (Texas A&M, Georgia, Miss St, Tenn.) despite losing the leading scorer to suspension in January. A win for Arkansas would raise their RPI and show that they can win on the road going in to the trip to play at Missouri. Winning on the road at either of those two places would improve their chances of an NCAA Tourney selection tremendously. 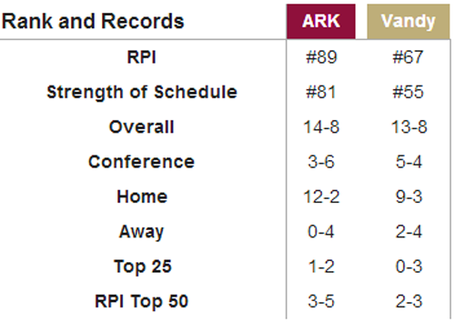 The gameplan for Arkansas has to be to continue to put pressure on Vanderbilt and to get Portis the ball as much as possible. Defending Rod Odom will be a tough task for Portis and Coty Clarke. Odom has taken over since the dismissal of Eric McCellan and is averaging 14.8 ppg with 44% from 3pt range. Making him take tough shots is key, as we have witnessed this season almost every team has a guy that seems to have his best game of the season against the Razorbacks.

Against Vanderbilt the keys to the game are:

-Continue to move the ball effectively and put guys in position to make plays. Vandy has won 88 percent of the time this season (7-1) when opponents record 10 or fewer assists.

-Get to the free throw line! FG%  has been horrendous recently (44% on season) so they will have to get points at the foul line to win. The Razorbacks have won 80 percent of the time this season (8-2) after recording 20 or more free throws made.

One point that needs to be mentioned, and Mike Anderson has repeatedly state as well, the importance of Moses Kingsley on the floor at the same time as Portis. Both of their games will improve if given more time in the lineup together. They will become a tough combination at either end of the floor.

Time will tell if Portis can be a consistent force in the SEC, and give Arkansas a dominant player in the half court game. Portis will continue to pick up his points in transition and rebound, the question is whether the 35 pt game was just a fluke or if  that was a start of something special. His skills and range are similiar to a Kevin Garnett or LaMarcus Aldridge type player, where he can post up, knock down the 16-17 footer reliably and be a terror on defense. He will have to show that he can play to that level consistently, which has been a struggle for this team all year.