Hogs look for a win over Mississippi St. who have lost 8 in a row.

Once again the Arkansas Razorbacks go on the road, and the lingering question is still whether this team can win away from Bud Walton Arena (more than once per year).

Arkansas won four out of their last five including the road win over Vanderbilt, and Miss St. comes in riding an impressive eight game losing streak. During that streak they lost all but one by double digits. (Lost to Vandy by 6) A win over the Bulldogs would not do much to boost RPI but would get this team to .500 in conference play at 7-7. Finishing above .500 in conference play would make a much better resume going in to the Sec Tourney, and in the eyes of the NCAA Selection.

Five games to go. Are we just kidding ourselves once again or will this stretch and a run in the SEC Tournament lead to a trip to March Madness?

Playing at Kentucky will not be easy, but Georgia and Ole Miss at home are very winnable games.

There will not be any help in RPI with a win over Miss State. Still a must win game. 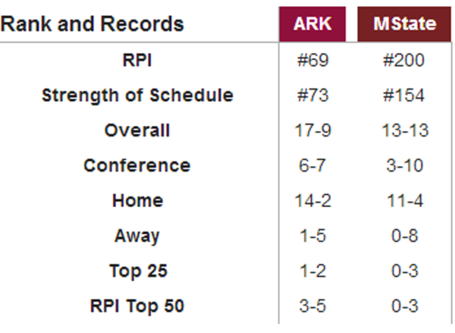 -Contain Miss St Guards- Be ready for the  I.J. Ready jokes by whoever is thrown out to announce this game. He is a freshmen PG from L.R. Parkview and has played considerable minutes. (Avgs 6.4 ppg) He was a three star recruit that was not offered by Arkansas and as the trend usually goes will probably score 40 on the Hogs.

-Create Turnovers, and convert points off turnovers. Mississippi St does not turn the ball over much so when Arkansas does create them they have to take advantage.

-Draw fouls early- The Bulldogs are at the bottom of the SEC in giving up fouls. Bobby Portis, Alandise Harris and Moses Kingsley must get to the free throw line.

This game is one that could easily be overlooked going in to the primetime battle on Thursday at Kentucky. Mississippi State has played inconsistently and depends on Craig Sword for most of their offense. He is a slasher who Ky Madden and Madracus Wade will have to keep off the free throw line.

Colin Borchert is a 6-8 Forward who can step out beyond the 3pt line and has knocked down 30% from there this season. He only played 6 minutes against LSU and fouled out, so look for Portis and Clarke to attack him early.

Mississippi St. is not a great rebounding team, but neither is Arkansas so there may be many offensive board opportunities for both teams. If Arkansas is able to pressure in the half court with out fouling and take care of business on the glass they should be in good shape to come away with a win. Adding another win away from home would be huge for this team and its confidence and cohesion going in to the final stretch of SEC play.