The return of "God's Play" and Power Football to Arkansas

The holiest of all football plays was on display in the Ozarks on Saturday, and it propelled the Hogs to victory

Share All sharing options for: The return of "God's Play" and Power Football to Arkansas

In the beginning was the run play. And then they invented the forward pass.

Under Bret Bielema, the Hogs are going back to the beginnings of football - and it was never more evident that last Saturday in the Razorbacks' 34-14 win over Louisiana-Lafayette.

When the Hogs needed to deliver the decisive blow to ULa-Laf, they turned to the ground and they turned to "power." Together, Alex Collins, Jonathan Williams and Kiero Small, combined to lead the drive that snuffed out the Rajun' Cajuns - a six-play, 49-yard drive in the third quarter that showcased the most essential play in Arkansas' playbook.

While Doc highlighted two drives to illustrate the offense's balanced attack in the first game, this was the drive stood out to me. It showcased the brand of power football that Arkansas is going to become known for under Bielema's control - and it showcased just how perfect power football can be.

The power run play is not a new or shocking play to anyone - it's Vince-Lombardi-at-the-chalkboard old school - but to this day, it's still an essentially perfect football play.

But coaches and players call it much more than just "perfect." For example, after Florida's upset of LSU in the Swamp last year was fueled by "Power," SI's Andy Staples wrote in his postgame column that the Gators had given it a different moniker:

"We call it God's play," Florida guard James Wilson said with a smile following the Gators' 14-6 upset of LSU. "It's a chance to get our feet in the ground and just muscle up." In Saturday's second half, God's play was the Alpha and the Omega.

And as "Power" was the Alpha and Omega for Florida last year, so it was for Arkansas in the second half against Louisiana.

(However, the power run play is not just holy on its own - it's a trinity of plays built into one. The power run, the play-action pass to the fullback, and the quarterback bootleg to the backside. A well-executed power run play is nearly unstoppable, but the two derivatives help keep an aggressive defense [one that's keyed up to stop the run] at bay. If the defenders crash too hard on the running back, the quarterback flips it over their heads to the fullback or turns and runs the opposite way. That bootleg play sometimes yields hilarious results:)

However, on this back-breaking scoring drive in the third quarter of last Saturday's game, Arkansas only needed two parts of the "power trinity."

Here's the pre-snap look on the first play of the drive. Two tight ends, two running backs, one wide receiver: 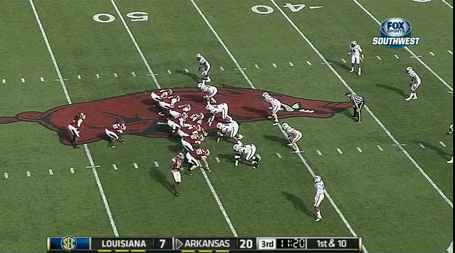 At the snap, both running backs take off as if they were attached to one another - they're trying to create the gap they want to run the ball into. 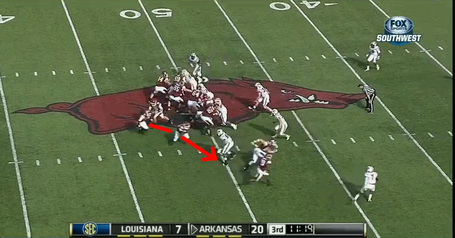 However, it's not a run - Brandon Allen doesn't hand the ball off - and Alex Collins plows into an oncoming linebacker, taking the defender out of the play completely. 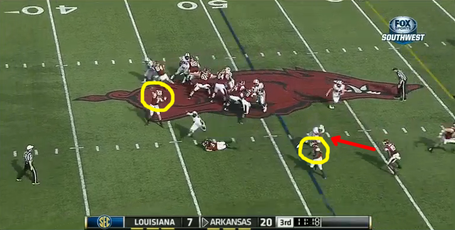 From there, it's an easy throw from Allen to Kiero Small. With the wideout coming back and setting a block for Small (red arrow), he picks up 8 yards easily.

The very next play is essentially the same, but it's a handoff. The formation is slightly different - the fullback is split to the weak side while both tight ends are to the right side, but it's the same concept. 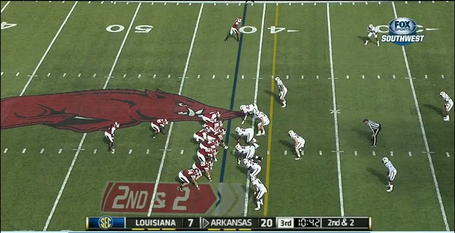 At the snap, the center and guard both begin to pull toward the right side of the line - they're going to clear the way for Collins this time. 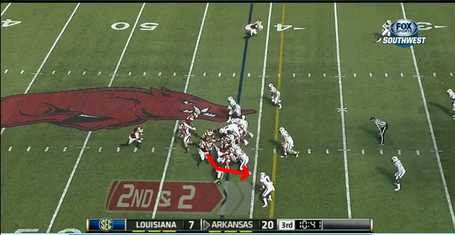 All three inside blockers seal off their men. The one outside blocker crushes his man toward the sideline. And Collins has his hand on Travis Swanson's back, creating a perfect (a Godly?) power-blocking convoy. 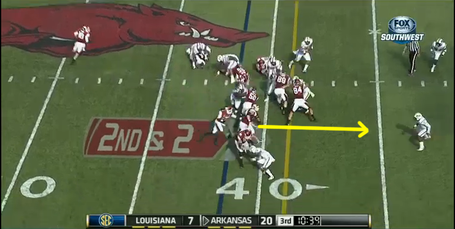 Look at that again from the sideline view. This is the kind of play that coaches dream about. The running back with his own personal blocker, storming through the line of scrimmage while four other defenders are absolutely wiped out. 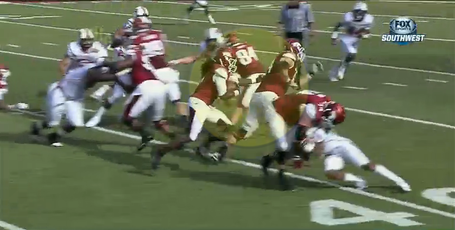 This play went for 17 yards, but it easily could have been a touchdown.

Arkansas tried the same run play on the third, fourth and fifth plays of the drive. Here's the fourth play, with Collins carrying the ball again: 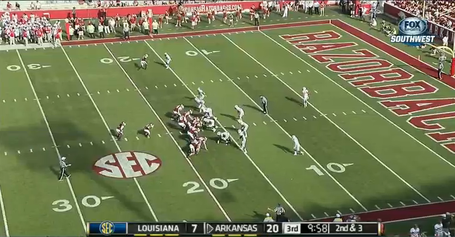 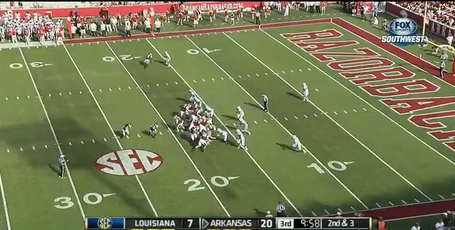 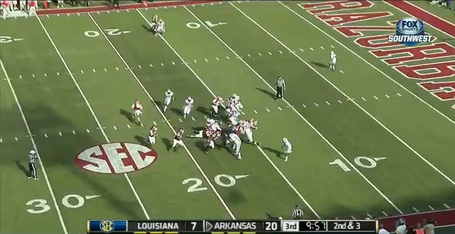 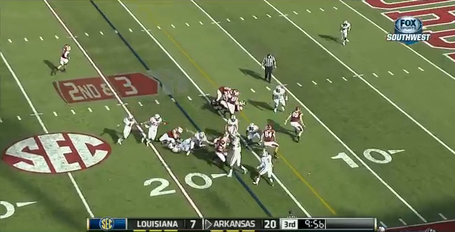 The formation is basically the same and the blocking scheme is basically the same, but it's not executed nearly as well as the second play of the drive. The play still goes for five yards and a first down, but the defense is beginning to catch on to what the Razorbacks are trying to do - run the ball with the "power" play. (Or, if you're more prone to a scientific explanation, they're trying to exert one of the fundamental principles of physics:) 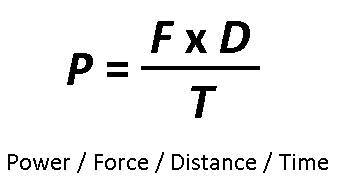 So now it's time to use the second part of the trinity. The Razorbacks run the same play they ran on the first play of the drive - a play-action pass to fullback Kiero Small.

The formation is the same. The running backs take off as if attached at the hip again. 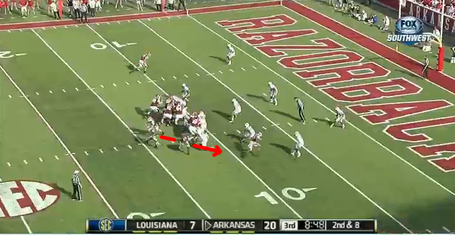 Once again, Collins obliterates a charging linebacker, and Allen has an easy pass to Small. This time, there's no receiver out on the edge to block for him, so he takes the power on himself - and bullies his way into the end zone. 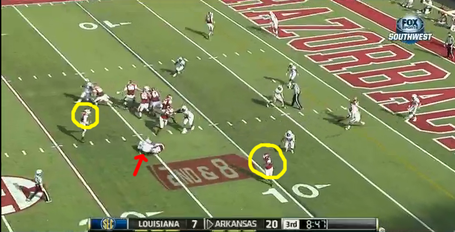 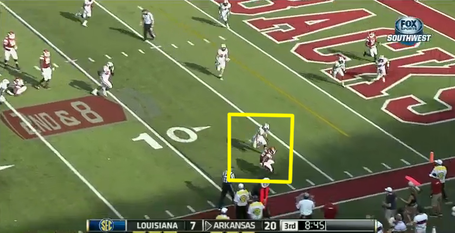 Two plays run over and over again. 49 yards and a back-breaking touchdown. Expect to see this play many, many more times this year and for years to come.

It's not a perfect play. It's God's play. And God saw that it was good.