USA Today Calls "Throwin' The A" a "Gang Sign"

I've tried to ignore this for the last couple of days, but I just can't do it. Allow me a little soapbox time.

I'm not a huge fan of this new "Throwin' the A" thing. I don't want to promote it much less defend it.

Earlier this week, when I saw USA Today referred to it in their headline as a "gang sign" I wasn't quite sure how to respond. Of course, it's a cheap way to generate a little shock value - implanting an idea in readers' heads that Jen Bielema is getting the Hogs involved in a 90s rap war or will star in a sequel to HBO's infamous "Gang War: Bangin in Little Rock" as the team prepares to go to Little Rock for Bret's first game at War Memorial Stadium.

On the one hand, why acknowledge it? It's just a tacky throwaway headline, right? Talking about it only helps it achieve its traffic goal, you know? That's all true. But it gnaws at me too much on a couple of different levels to forget about it.

At what point do we confuse a college sports hand signal with a gang sign?  Is Guns Up a gang sign? Hookem? The O-H-I-O spell-out? Would they be willing to post a picture of James Franklin with the "VU" and call it a gang sign?  Highly doubtful.

Let's leave gang signs to actual gangs. Can we just refer to run of the mill hand signs and hand signs? But that headline's not as sexy, is it? It just doesn't have the same SEO power. People don't want to read about an SEC coach's wife inventing a hand sign, do they?  But a gang sign? CLICK!

Who cares if you're a national newspaper? Gotta get those page views!

Just this summer, Ohio State President Gordon Gee lost his job after saying that Bielema's former boss called Bielema a "thug".  It was enough that Jeff Long even issued a statement in response to it.  "Thug" and "gang" have very similar connotations. I get that a lot of people outside of Arkansas don't like Bielema. He's done and said plenty of things ranging from harmlessly goofy to ridiculously arrogant. But I don't get where this whole "thug" and "gang" deal is coming from. Just look at them. They're not even a singing and dancing gang like the Sharks and the Jets.

Bielema was basically invented for 21st Century Internet snark. BERT is perfect. It's easy to make fun of him. I was doing it just last night when I read that he was listening to Kid Rock while walking down the Hog Walk. I imagined him having his own Joe C, a mini-Bert if you will, and that image made me quite happy. 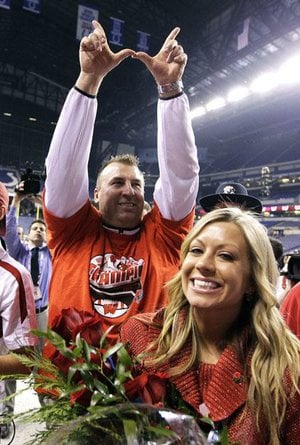 Hand signs aren't even a particularly new thing for Bielema. When at Wisconsin he frequently threw up a "W" which was obviously a sign of his former affiliation with the Great Lakes Dairy Mafia.