The Razorbacks said this is a trailer, and they meant trailer.

We're all used to school-produced hype videos at this point. Most of them are pretty cheesy, what with dramatic music and fast-paced clips of highlights from previous seasons spliced with shots of the team working out in the summer. So what makes this Razorback video different? What makes it epic in scale?

They produced it as if it's actually the latest installment of some sort of fantasy action saga. In addition to the music and the chanting and everything, look at the way they even made the taglines dramatic. Look at the screen when it says "A New Leader Emerges" and look at this screenshot from one of the videos on Star Wars: A Musical Journey 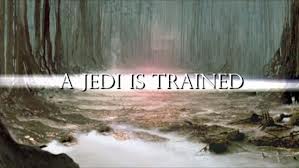 We're talking some serious scope here people. The universe is at stake.

The Razorbacks may be in for more of an Empire Strikes Back season than Return of the Jedi year, but maybe we'll get lucky and blow up a death star along the way.