One summer a few years ago, the CBS Sports Station showed nothing but classic SEC replays 24/7 leading up to the new football season. It was magical. If nothing else was on, I ended up on that channel without fail, and often still would even if something else was on. I thought there wasn't a good reason not to have a channel of this year-round.

Lo and behold this little bit of info from the Sports Business Daily.

The SEC and ESPN plan to formally announce the creation of an SEC channel on Tuesday. The two parties have begun to reach out to key constituents to let them know about the 12:00pm ET announcement at the Atlanta Hyatt. University presidents, ADs, SEC Commissioner Mike Slive, ESPN execs and the conference's corporate sponsors are among those being invited to the news conference. The SEC and ESPN have been working on plans to form a channel since the fall of '11, and the new channel is expected to launch in August '14.The channel is expected to have its studio headquarters in Charlotte at the ESPN Regional Television offices, while the primary sales outlet will be based in Atlanta.

This isn't news in context of it being unexpected. It's news because it's finally officially happening, and now we can guess what all it will bring with it.

Of course, it should be expected that we'll get to see many more non-revenue sports more frequently, if the Big 10 Network is setting any example. Could it also mean the SEC is going to move to a 9-game football schedule? Possibly. I've thought since they announced the 2013 schedule as a "bridge" schedule that the 9-game model would be at the other end, but we'll see.

In the meantime, CELEBRATE CASH! 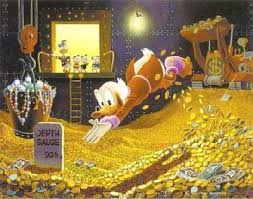