It was the best of times, it was re-crootin' times as the no. 22 Arkansas gymnastics team faced the no. 1 ranked-Florida Gators last night at Barnhill Arena's PINK Meet.

Share All sharing options for: Valiant Efforts and Jorts: #22 Gym'Backs Fall to #1 Florida

The Susan G. Komen PINK Meet has exploded in recent years to be a real attraction in the cold Northwest Arkansas winter, not only for its excellent cause--breast cancer funding and awareness--but also for an always exciting Gym'Backs team. Last night was especially outstanding as football recruits and their families, along with people like Coach Bret Bielema and former Hog DJ Williams crowded in to cheer the 'Backs on for what Coach Mark Cook hoped would be an upset of a Florida team that is literally stocked with Olympians. Alas. At the end of the meet, Arkansas' Gym'Backs finished with an excellent 196.175--outstanding marks for any squad facing any opponent and this team's season high. Alas, the 'Backs could not best a superior Florida's 197.575.

Let it out, Draco. Don't hold back.

The Gym'Backs vaulted off as the Gators took to the uneven bars. Strong, complicated and beautifully executed vaults from freshmen Heather Elswick, junior Katherine Grable, and senior Kelci Lewis that made Barnhill roar, though no one does this at Gym'Back meets. Grateful? YES. Arkansas seemed poised to battle a stellar Florida squad that killed it on the uneven bars. At the end of the first rotation, Florida led the 'Backs 49.450 to 49.150.

At the start of the second rotation, freshmen Erin Freier wowed Razorback fans with a graceful, gravity-defying bar exercise that garnered a 9.875, and was followed by two more near-perfect routines from junior Shelby Salmon and senior Amy Borsellino. 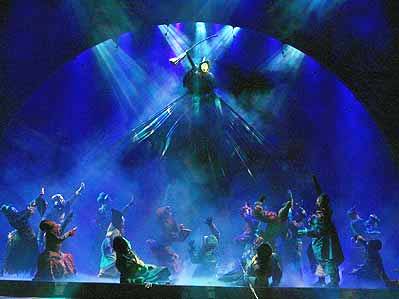 It was especially nice to see Salmon bounce back in a bar routine from last week's terrifying fall on that exercise. Meanwhile, Florida freshmen Bridget Sloan, and seniors Ashanee Dickerson and Marissa King's vaults challenged the 'Backs best efforts. At the end of the second rotation Florida led, 98.850 while Arkansas trailed half a point behind. Easy to fix that, no? 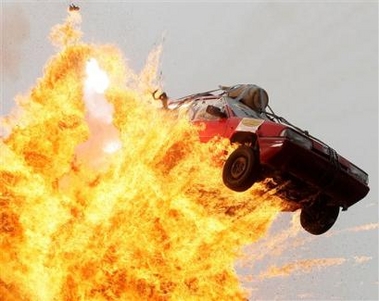 After a month of making me think that the balance beam was finally the 'Backs' friend, Fate decided to dash all my hopes. Borsellino managed to eke out a 9.65 after barely sticking a complicated Arabian on that 4-inch plank, which made her musical choice-- R. Kelly's "I Believe I Can Fly"--SUPER ironic. While she struggled, Florida's Kiersten Wang gazelled her way through a solid floor routine to what sounded like arcade music—eh. Frier and fellow freshman Sydnie Dillard executed complicated, athletic beam exercises with minimal bobbles, but Fate decided to have another go at poor Shelby Salmon, who for the second week in a row crashed, this time on her bum. Satan also pushed Glover off the beam after she could not stick a layout. Salt in wounds for Razorback fans as Florida's Dickerson nailed two floor passes and incorporated some adorable dance elements that really should qualify her for the Olympics. She is not my friend At end of 3rd rotation, Arkansas trailed 146.750 to the Gators' 148.125.

Rattled, Arkansas moved to the floor. Missteps plagued junior Bailee Zumwalde’s normally-fantastic swing routine, while Florida's Randy Stagberg--who is NOT someone's jort-wearing father--earned a 9.9 on a suddenly non-threatening beam. WHAT. A series of strong floor routines from an adorable Elswick and solid Dillard could not best Gator Mackenzie Caquatto’s layouts to RUN-DMC on beam. It seemed that Lewis' outstanding, "Dark Knight"-flavored routine might bridge the gap, or Borsellino's outstanding passes, or Grable's 9.95 routine that cemented her as the Wisconsin Wunderkind. Yet, the Gators prevailed.

It was a hard-fought, valiant effort for a Gym'Backs team that is still recuperating from copious injuries. Senior Jordan Salzberg executed a beautiful, elementally-complicated bar routine that belied the fact that she's suffered from leg injuries all season. The 'Backs are also a young team, continuing to grow and season in an SEC that is as brutally competitive in gymnastics as every other sport (basketball excluded. Shut up, Kentucky). Despite last night's loss, this is a hellacious squad to watch. Coach Vickerman approves. 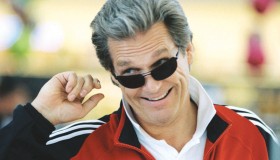